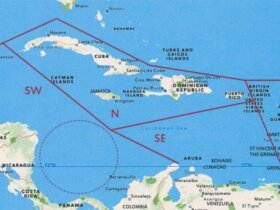 Occasionally you meet some outstanding personalities that come to these islands. Usually they are so magnanimous in one way or another that they are a class of their own. In any case, you never forget them. Beauregard was one of them.

If Beauregard had a last name, most of us didn’t know it. Maybe only John, his companion did. Beauregard probably came here in his early years and soon became known as a free spirit and an adventurer par excellence. He wasn’t loud and didn’t show off or boast of his accomplishments like some did. He just decided he could do just about anything he wanted and did it without bothering anybody else.

Beauregard loved to roam although he was quite attached to John. John didn’t worry about him because he knew that Beauregard would be discrete and not embarrass him by his wandering. Seldom did John have to bail him out from any indiscretions. But sometimes he would be gone a long time. So John would call up the local radio station and ask them to put out a bulletin on Beauregard. Usually it said something like this:  “If anyone sees Beauregard, please let John know at Yacht Haven so that he can come get him. He usually hangs around restaurants.”

But he would soon be off again for another adventure and John was wise enough to let him go and do his thing. His thing was to fly. Beauregard was so eccentric that few could resist him. He became fast friends with the Antilles seaplane pilots and frequently flew with them to St. Croix and St. John. He got free meals, sometimes a bed and never had to pay a cent because he was such a nice guy. Neither did he get drunk, sloppy or fart much. He kept himself clean, never imposed on anybody and was entertaining to have around.

An urban legend says that Beauregard once flew to Antigua. The customs officials were upset because Beauregard didn’t have a passport. No money either. He was just himself. Even though he put on his best face and argued politely as behest a gentleman of his breeding, the officials would not let him stay. The pilots weren’t coming back to St. Thomas until later the next day. They called John and explained the situation.

“Oh, gee,” he said, trying to quell his giggles. “Just buy him a ticket on another airline coming back here today. I’ll meet him at the airport. When you return, I’ll pay you back. But don’t let him  sneak aboard another plane going outside the U.S. You know how he is. He has such a way with the stewardesses!”

One day Beauregard wasn’t feeling well. Not wishing to bother John, he simply walked the three miles or so up to Andy Williamson’s clinic. Not being a complainer, Beauregard didn’t tell Dr. Andy enough, so John was called to see if he knew what was wrong.  John said, “Oh, just fix him …no, don’t fix him…I mean, make him feel better, give him what he needs and when he’s ready, I’ll pay the bill and pick him up.”

As the years pass, even the stoutest adventurers get old. Beauregard was succumbing to gravity as do all of us and had become sort of low slung. One evening he was at Sparky’s bar and decided to leave. As Beauregard went slowly down the front steps, he must have slipped, for he gave an ungodly scream of agony. Old age had betrayed him. He had stepped heavily down on his own…um, undercarriage!