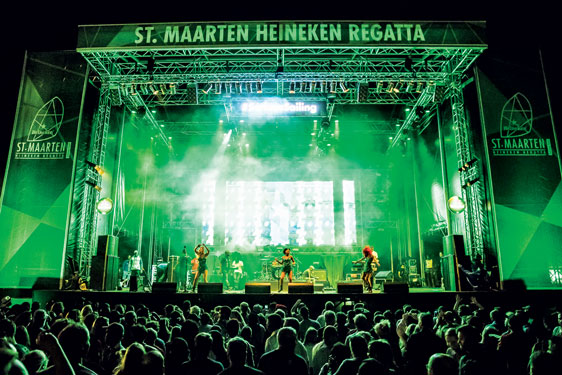 There’s something about Anguilla that draws you back time after time. Maybe it’s the tranquility of the place where life seems to ooze along. Maybe it’s because of the people. Or the goats. Both move at about the same pace.

Or maybe it was because everything was so uncomplicated in 1972 and so pleasant. No rushing to get from place to place. No traffic. No deadlines. Everyone was always willing to stop what they were doing (which wasn’t much) and spend time with each other.

We were back at Sandy Ground, Anguilla again on Avenir II back then with repeat charter guests who were avid explorers, snorkelers and shellers. Having heard a rumor that the fisherman at the northern end of the beach had some really big shells, we decided to check it out. The rumors were true.

Holy Cow! Not only did he have a Queen Helmet (Cassis cornuta) which was barely an inch smaller than the largest Queen Helmet documented in the National Shell Registry, but he also had a King Helmet (Cassis tuberosa) that just missed the record size.

After pictures and conversation, we strolled down the beach to admire the sweet, clean lines of the Anguillan fishing boats. Mr. Gumbs, who was the manager of the salt pond enterprise, had his “office” in a tiny building near the beach. We stopped there to buy little bags of table salt and listen to Mr. Gumbs who was happy to tell us some interesting facts about the salt production.

As conversations tend to go, he began to ask about Mike and me, where we were from, and so on. When he heard that we didn’t have any children, he was very concerned and direct.

“You can’t have children?” he asked.

I didn’t want to get into details such as that the charter business made it difficult to have them and you couldn’t have them aboard when there were guests, etc. So I just politely said, mostly to appease him, that we didn’t have any yet.

“Oh,” he said, nodding sagely. “I understand now. You haven’t been able to have them. Well, I can give you some advice, if you don’t mind.”  I nodded and he cleared his throat and looked at me kindly.

“You see, you must put yourself in the right mood. You have to relax and allow things to happen. We had several girls in the village here who couldn’t seem to have babies. Do you know what they did?”

I could think of all kinds of things, but thought it best to just play dumb. “No, I can’t imagine.”

“Well,” he said, clearing his throat and looking me directly in the eye which was usually considered by islanders to be impolite but not in this case.  He leaned closer to me, as if we had a conspiracy. “You have to warm the blood to get it moving. This is what you do. Every morning just as you get up, you drink a glass of red wine. Then before you go to bed, you drink another glass of red wine. That gets the blood moving just right.”

“Did it work with those girls?” I asked. Mr. Gumbs straightened up and proudly said, “Oh yes! It work fine! Those girls have had babies ever since!” He smiled at me grandly, nodding his head.

I thanked him for his advice, made the proper goodbye noises and wandered off with Mike. When we were out of Mr. Gumbs’s hearing, I whispered to him.

“Don’t you ever give me another glass of red wine! Ever!”