Home Caribbean A Matter of Tradition 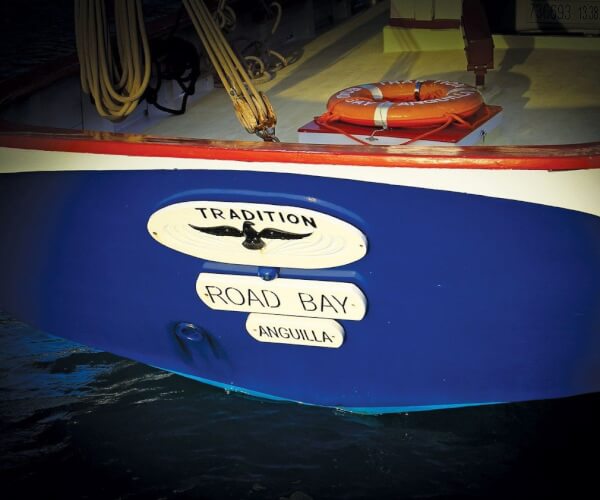 In May I had the privilege of sailing on a West Indian workboat during the West Indies Regatta in St. Barth. The boat, Tradition, skippered and owned by Laurie Gumbs, is based in Anguilla, where she is a very popular day charter boat. Laurie Gumbs is the son of Sir Emile Gumbs, a former Chief Minister of the island territory and past owner of the famous schooner Warspite, the vessel depicted on the East Caribbean ten dollar bill.

Tradition is one of only a handful of West Indian workboats sailing today and the annual regatta plays a vital role in keeping alive the history of regional boatbuilding and honoring the men who made their living aboard these vessels. Sailing in the regatta was magnificent but it paled in comparison to the reception offered to the event by the government, port, and people of St. Barth, who embrace this event with a passion. St. Barth was a vital link in the inter-island trade and sailing sloops and schooners were a regular sight in Gustavia harbor, where they loaded a variety of goods including rum.

By embracing its maritime history, St. Barth is helping keep the last of the workboats sailing, and during the regatta it was announced that a new sloop is to be built in Carriacou for a St. Barth owner. You can read more about the West Indies Regatta on page 58.

The Caribbean has numerous islands that are only accessible by boat and for cruisers sailing to these islands, it adds to the romance and adventure. If we were to list all the islands that you can reach only by boat then we would run out of pages, so writer Carol Bareuther faced the difficult task of selecting only ten for her ‘boat only’ article. I have visited all of the islands mentioned and many more besides, and perhaps my list would have been different. If you have your own list of favorite islands accessible only by boat then let us know.

It’s a fact that sailors go out of their way to help each other and sometimes put themselves and their vessels at risk in order to do so. Assisting boats in trouble has cost me anchors and lines, sails and fenders, equipment and tools. One effort cost me my big toe nail, which I left blooded and strung with flesh on a deck cleat while trying to stop a boat chartered by a honeymoon couple from dragging onto rocks.  Although I may grumble and cuss after the fact, I don’t regret helping; after all, the next person in need might be me. This leads me to an interesting story sent in by Candy Colley. Following the traditions of the sea, Candy and her friend Louise Stone answered a call for help and in so doing put themselves at great risk and ended up damaging their own boat. Even more unnerving is that, according to Ms Colley, when they called the sea rescue services, they turned the whole thing into a farce and said the yacht they had gone to help didn’t qualify for assistance and therefore everyone was  on their own. This is not something you want to hear when lives are at risk. Although they made a valiant effort, eventually the two friends realized that helping the distressed yacht was beyond them and had to abandon the attempt, only to end up being in need of rescue themselves. Fortunately a friend was able to do this with more efficiency than they could expect from the local coast guard and rescue services. The story does have happy ending, yet it begs the question: When do you say no? Decide for yourself on page 40.

Rivets… What Kind to Use on your Boat AND How to...