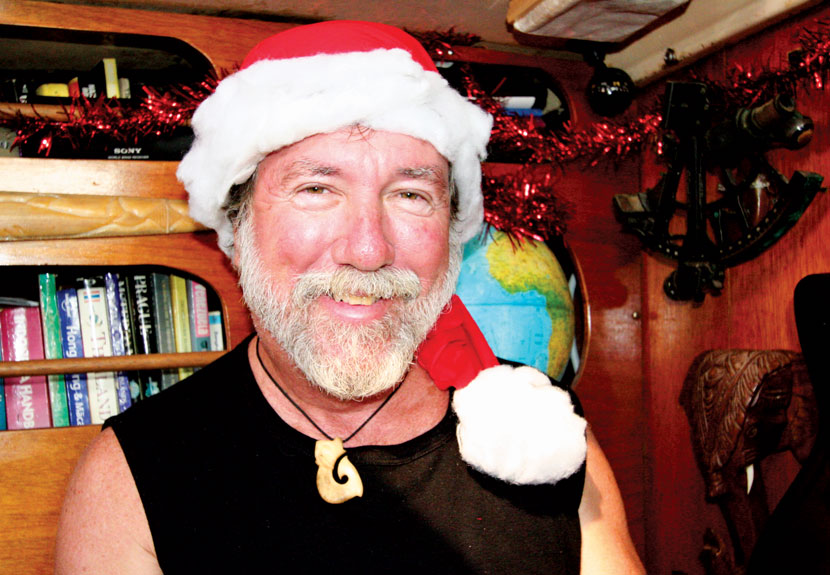 I have a simple goal. Cruising safely! I want my boat to be the safest in the harbor. This is logical. My life, and my wife’s life, depends on it.

This is a very common goal.

However, throughout my life, all my boats have been Dumpster Boats—very inexpensive vessels sold cheap because no one else wanted to spend the time and money to fix them up. Plus, I’ve spent all my life being a marine lay-about, and thus have very little money.

Are these two realities mutually exclusive?

How do we manage to average over 6,000 miles a year over the last few decades on an extremely limited budget?

We work harder, longer, and smarter than our wealthier counterparts.

For one thing, we’re proactive. If I’ve learned anything in 59 years of living aboard and ocean sailing—it is that things break; eventually, all things marine break or cease to function. Two, we try to stay in sync (or harmony) with our vessel. Right now, we’re about to set off on the very difficult passage down to stormy New Zealand. Our 43-foot Ganesh is as prepared as we can reasonably make her.

Nonetheless, we realize that our anchor windlass is deteriorating—it is both leaking lubricant and needs a new motor. Also, our staysail has seen long, hard use—the fact that its sun cover is deteriorating is just the most obvious clue. Our genoa jib is suffering spreader tip chafe. While our engine is running fine, the seal to our raw water pump is weeping. Our cranking batteries are not as strong as they used to be. Our chain has accelerating rust and either needs to be galvanized or replaced. (Actually, it is starting to skip in the gypsy, so it needs to be replaced.) Our fresh water pump occasionally sticks on. Both our Jabsco heads need to be rebuilt—leaking seals. And, yes, I am aware that over the last four years, my main mast step has sunk over two inches …

You Have a Choice: Sail or Spend!

The point I’m trying to make here is that—while my boat is extremely well-prepared for a difficult ocean passage—I am also aware that she has many problems, some of which will have to be dealt with soon. Thus, when I arrive in New Zealand, my attitude will not be, ‘gee, I just transited one of the most difficult passages of any circumnavigation so my boat must be perfect and I’ll be careful not to touch anything’. But rather, ‘okay, now is the time to conveniently address some of these longstanding issues’.

A common way to accomplish this is to pull into a shipyard and hand them a work list and a credit card. I have no problem with this. Alas, I can’t afford it. I do all my own work on my boat—the thought of having someone paint my hull with antifouling does not appeal.

Parachutists pack their own chute—me, too. If I felt I was too old or too weak or in too poor of health to paint my hull—I certainly would not be circumnavigating for the fourth time.

Regardless, giving someone carte blanche to work on my boat isn’t a financial option for me.

Down with Sea Gypsies

The Buy list is things I need to purchase (wisely, inexpensively) for future projects and the Jah list is stuff that God and Karma need to bring my way because I can’t possibly afford them.

Is the Jah List silly? No, not at all. Many of my blocks, halyards, and running rigging have been given to me, seemingly out of the clear blue sky. Ditto, a brand new Westerbeke 50. Also, a complete suit of custom-built sails. An anchor windlass. A brand new eight-person liferaft. And hundreds of other pricey items were nearly free: our 52-foot boat Elizabeth was $100, the 22-foot Corina $200, and 38-foot Wild Card was $3,000 (or, since I sailed her over 80,000 miles, her initial cost was about three cents a mile).

We have a large cabinet on Ganesh, our Amphitrite 43. We call it our ‘future projects’ locker. This is where all the items we ‘buy right’ co-mingle with all the stuff Jah gives us. Once we have enough (or nearly enough) gear off both our lists, we begin the project.

In essence, we proactively repair and replace our gear when and where we want to—not where it is expensive and difficult to obtain.

We could not do this if we weren’t in tune with our vessel.

What Swimsuit to Wear on Vacation in the Caribbean?

Ditto, with our safety gear. We don’t buy it when we need it, we allow Jah to give us stuff years before we need it—for instance, our liferaft, Paratech sea anchor, and various slowing drogues. Then, long before a passage, say, across the lower Indian Ocean as we did in 2015—we filled in the blanks as our budget permitted.

Here’s the truth of it—I don’t believe that I’ve made a passage during the last few decades where my vessel wasn’t (arguably) among the best-prepared vessels out there—even though among the least expensive. All the money in the world can’t buy common sense. Seamanship must be learned the old-fashioned way—it cannot be purchased at a chandlery.

In 2012 we set off for New Zealand with about 80 vessels coming from the Cooks, Tonga, Fiji, Vanuatu, and New Caledonia. We got into a ‘bit of a breeze’ as our Kiwi friends call it. Three vessels dismasted—with one losing its steering as well. Each was a multihull over 60 feet long and in the three million dollar range.

In 2016, we were in the lower Indian Ocean between Cocos Keeling and Rodrigues when struck by a small gale. The skipper of an 80-foot Oyster called us on the SSB. He was terrified. We advised him to heave-to. He said he didn’t know how. We then suggested he consider launching his Paratech sea anchor from the bow or his Jordan Series drogue from his transom—regardless, if he was going to run off, he should hoist his storm trysail and tow a Shark or Sea Brake to inhibit broaching.

He said he didn’t have any of those and didn’t even know what they were.

It was everything I could do not to shout back, “But I bet you have a giant, full-color cockpit chart plotter, Satellite phone, PredictWind app, wide-screen TV, center console dinghy, a multi-speaker stereo system, full insurance coverage, well-stocked bar, and commodious refrigerator, don’t you?”

Cruising Safely isn’t a matter of bank account level, it is a matter of hard work, knowledge, and seamanship.

What is your priority—a vessel set up for easy and convenient entertaining—or one that survives year after year offshore? If you’re on a limited budget, you can’t have both.

It’s your choice—and there is always a possibility you might live or die by it.