You Have a Choice: Sail or Spend! 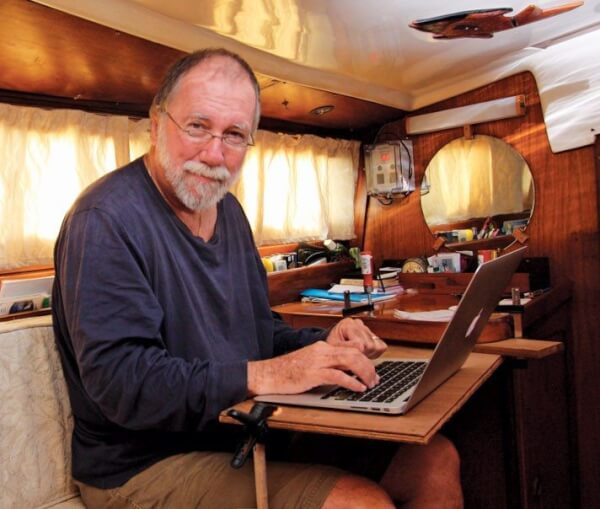 For the last decade or two I’ve been averaging around 8,000 nautical miles per year. This isn’t easy to do. Luckily, I have some advantages. For instance, if my wife is ashore she spends money, but at sea, nada. So, yes, I’m motivated.

Like most sailboaters, I’m cheap. I live on the pennies Scotsmen throw away.

There are other reasons. What are they? Take a moment, dear reader, and observe the pigmentation of your skin. Whatever color you are is the color I don’t like. I know, I know—this isn’t considered PC and is rarely mentioned these days. But that’s the truth. I find people of your color and my color and any other colors sub-intelligent, evil, stupid, mean, dumb, and greedy beyond belief. To put it another way, I’m prejudiced against people. I do not like my species. They are gleefully killing the planet in the name of gross profit.

It is one thing to be the worst predator in the neighborhood. It is another thing to eat/burn/consume that neighborhood in the name of free enterprise.

What exactly is ‘free’about the destruction of our planet?

Were the aboriginals and the American Indians we slaughtered that much smarter than we?

Let’s just stop and consider this for a moment. Our habitat—Planet Earth—is being heated up by the land sharks to such a degree (sic) that mankind might expire and the people who are doing this think that investing in industrial air-conditioning units is wise.

I believe that money doesn’t talk, it swears.

Now, perhaps you haven’t noticed but Mother Ocean is still remarkably free of capitalists running amok.  All the money in the world won’t help you in the middle of an offshore gale. There are no cellphone towers, no lying/cheating internet providers, no iClouds with dollar signs printed on them.

Even more amazing, there’s no celebrity gossip to distract you from the fact that some boys from Texas looted the national treasury a while back—at the same time some other boys from Wall Street stuck the American taxpayer with their bad gambling debts, cocaine costs, and hooker fees.

I am NOT making this up.

So my task seems clear—to try to spend a few pleasant afternoons with my wife while our planet and culture flames out. My vessel is the key. Money is not the key. Money, in fact, is the False God of the Offshore Sailor. You can’t buy safety at sea at Kmart. Seamanship can’t be bought. It must be earned. That’s why the oceans are still empty—and that’s why I live in such ecologically pristine places as Beveridge and Minerva Reefs, Chagos, and the long forgotten isles of lost Indonesia.

How do I do this?

It is simple—but first you have to do something really, really scary. You have to take your blinders off. You have to remove your culture filter and see reality—not the sales pitch. My central premise is dead simple: Money doesn’t buy you much and money is expensive.

Money is expensive? Yeah. Money owns you as much as you own it. It is a huge hassle. For instance, everyone wants it—and thus attempts to enslave you as a consumer. It is taxed. People who really dislike you attempt to befriend you because of it. It takes a lot of servicing, looking after, and endless counting.

What does money buy? Anything important? Love? Health? Respect?

It buys baubles—and baubles have no lasting value whatsoever.

Money doesn’t even buy leisure time! Go down to the nearest mega-yacht marina right now. Fight your way through the LEOs (law enforcement officers) who are protecting the super-rich and ask the maid who is scrubbing the toilets aboard how often ‘her owner’ actually visits his 100 million dollar vessel.

Not often, statistically. Why? Because the billionaire has to service his money. Ha ha! The poor sap! No wonder it burns his butt that guys like me are having their cake and eating it too!

I believe that you should be able to buy a vessel with an initial cost of, say, the price your average yachtsman in the Lesser Antilles spends on their onboard electronics—and then sail it safely and joyously around the world on far fewer pennies than it would cost the USA to incarcerate you for an equal amount of time.

Yes, circumnavigators such as me are saving the US taxpayer a bundle!

Of course, said vessel would look and act differently than the modern harbor-hugger in search of a place to thrust its hungry shore-power cord. It would not be a floating ATM purposely set up for easy looting by land sharks. It would not be a vessel set up for consuming stuff—but rather a vessel intended to live in harmony with Mother Ocean.

One of the goofiest things about yachting is this ‘speed’ thingy. I’ve never understood it. However, it is a total given and a wonderful sales hook to fish dollar bills out of yachting billfolds. It has been repeated so often and so loud and so all-persuasively—that it just is. It is an accepted, commonly held belief that we should make our sailboats go fast.

How stupid is that?

Perhaps making your Lear jet go fast has some logic—but your sailboat?

Let’s take a look at your sails—these expensive rags a yachtsman uses to harness the wind. The conventional wisdom is that they need to be relatively new, so that they have the proper shape to harness the wind in an efficient, fast manner. This sounds totally logical—and yet is really goofy (in my humble opinion).

Why do you want to go fast? Why would I want to rush through the very same natural environment that I’ve worked my entire life to be able to afford to visit? Besides, what is fast?

Two of my dearest friends recently consulted me and purchased a very fast 44ft aluminum French racer. They then spent a small fortune on high-tech sails, expensive sail control systems, and complicated sailing electronics. Being racers, they flew in a crew from the Med. We were going to leave the Galapagos on the same day, but getting all their electronics and plotters and interfaces working took an extra few days. So they worked frantically (and expensively) and shoved off 72 hours after we did.

They raced the whole way—often running at night with their asymmetrical chute to reach up a bit or switching to the symmetrical chute when dead-down was a better VMG choice. Of course, all this high loading had a cost: they collapsed a spinnaker pole during a squall; they severely chafed their mainsail on the spreaders, and one crew member hurt her wrist on the traveler during a heavy-air jibe at midnight.

My wife Carolyn and I poled out our ‘one white floppy thing’ (jib) on our $3,000 yacht, took off our clothes, and had fun.

Our vessels arrived in Fatu Hiva within hours of each other after a passage of 3,200 ocean miles. The racers were very happy. They’d beaten us by three days—and mentioned it numerous times. And each time we played along, looked embarrassed, and said, “Yeah, that new boat of yours is really fast!”

But what I was really thinking was that if I’d have wanted to arrive three days earlier, I’d have left three days earlier—and spending 72 hours less at sea translated, in my hedonistic world, to missing at least two wonderful adult exercise sessions—which would be a real shame!

Life is too short not to smell the roses.

The funniest part of this need-for-speed-at-a-snails-pace concept is how much it costs for a Dyneema mainsheet and the lightweight (what’s the trade name, Air Head blocks?) sail control systems which accompany it … all controlled by a skipper who hasn’t the foggiest notion where the end of his boom should go within a yard or two!

It’s crazy. Most of the time that I—serial circumnavigator that I am—spend adjusting my sails isn’t to make my vessel go faster but safer, cheaper, and more comfortably.

Speed isn’t safe, cheap, or comfortable. Speed is expensive, dangerous, and uncomfortable. So how in the hell did Madison Avenue convince sailors that the very thing that they’re in search of (the tranquility and peace of Mother Ocean) should be rushed through dangerously and uncomfortably at vast expense? Are we yachtsmen really that shallow? That gullible? That easily hoodwinked?

Most modern sailboats are set up to consume stuff because they are owned by people who were born and bred to consume. Fine. That’s an option. But you can’t put a lot of sea miles on your vessel if you’re busy renting ‘marine experts’ to drill holes in your hull to install stuff that will quickly break and/or go out-of-fickle-fashion soon anyway.

So the reality is that most of the boats with all the bells and whistles are sitting in a marina somewhere waiting for expensive parts to be air-freighted in. Which is fine. We know numerous newbie circumnavigators who aren’t having a particularly pleasant experience. They spend all their time at sea worrying about their vessel and all their time at the dock buying stuff for their vessel—and spending $100,000 a year to do so.

But they tend to sail far less than the modest, basic cruiser with a wind vane, stout rig, dry bilge, open mind, and little else.

The world is my oyster—the sea my classroom.

And so can anyone—on the pennies Scotsmen throw away.

Editor’s note: Cap’n Fatty is on his 54th year of living aboard, and is currently at sea heading for Bali via the Torres Straits.