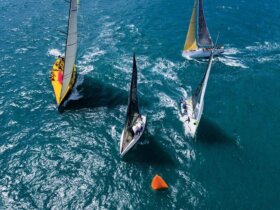 Very few Caribbean vessels sport the type of offshore safety gear that is common aboard an Indian Ocean cruising vessel. Just in terms of commercial drogues (slowing devices) we carry a Shark, Burke Sea Brake, Gale Rider, and a Paratech sea anchor. All these units cost money, and, of course, there is the expense and weight of the 400-foot rode, plus its bridle.

Why carry a drogue? Well, one reason is comfort. Our Ganesh, a ketch-rigged Amphitrite 43, is much more comfortable (and safe) running downwind in mature seas and 40 knots of breeze with a slowing device deployed. Plus, slowing devices dramatically reduce speed. This is especially useful if a lee shore looms or you don’t want to stay in the moving storm any longer than necessary. These devices also almost eliminate pitch-poling and greatly reduce your chances of broaching. And, of course, drogues can serve as crude steering devices.

When our friend Patrick on Egret lost his rudder in mid-Atlantic, my wife Carolyn talked his wife Amanda through the sewing of a drogue made out of poly webbing. They were soon averaging 80 miles a day towards their destination.

There is no doubt in my mind that drogues are useful, however, they do take up space and cost money.

Let’s say you have some space but lack money. Fine. Being broke isn’t anything to be ashamed of—going to sea unprepared for the conditions you’ll encounter is.

Here’s how to greatly increase your chances of surviving a major blow offshore without spending a penny.

First off, you’re probably already carrying some slowing devices but don’t realize it. When my boat bumps into the fuel dock, I yell at my wife, “Damn it, honey, toss a drogue in there!” because I use my six fenders more often as drogues than boat bumpers.

I start off towing one fender on 100 feet of discarded ‘dumpster dove’ cordage and add fenders and rode in series as needed. This works amazingly well.

If you are going to cross an ocean and don’t have any fenders—just salvage a few discarded tires from a vacant lot. These are almost always free everywhere. There is no excuse for not having a couple aboard on a major passage (if you have nothing else).

You say your boat is too small or too big for automotive tires? Fine. If your boat is particularly petite, go behind the service department of a private airport that caters to small planes. You will find a large selection of cute tiny little discarded tires. I used four white-walls on my first vessel, the 22ft Corina.

If your yacht is too big—say you own a 150-foot Feadship but are extremely miserly with your pennies—well, visit an earth-moving repair facility or a truck stop. There are lots of giant tires there. (Yes, inexpensive retreads are fine in a blow!)

Fenders and tires are fine in little gales. However, in true storms, you’ll need to do better. Thus, we collected Nylon discards from various sailmakers and then sewed up 136 cones with three pieces of webbing each. This took a bit of time but cost almost nothing. Then we tied them onto discarded ropes of various diameters … until we made a classic Jordan Series Drogue (JSD) to deploy off our transom. (Hint: use your thicker lines closer to the boat, with the thinner lines (even 3/8in) at the end.)

This stern-deployed JSD has almost no shock-loading compared to a parachute-type sea anchor because it is on both the crest and in the trough of the waves at all times—and has much more momentary give when your vessel is struck by a dangerously breaking sea.

Of course, if you want to use a parachute-type sea anchor off the bow of your boat—fine. Just buy a used cargo parachute (google BOURD (bureau of ordinance) or surplus cargo parachute), reinforce it, and you’re good to go.

How do you reinforce it? Just borrow a professionally made parachute-type sea anchor from a rich yachtie in the harbor, study it, and do sort-of the same, duh!

The ideas of a cone and a parachute have been around for a long time. They are not patentable (although their specific execution may be).

Making a JSD or converting a cargo parachute into a sea anchor is not rocket science.

You’re a carpenter who doesn’t sew? Fine. Then craft a wooden sea anchor (see illustration) out of used lumber. Here is my version of a Fredrick A. Fenger classic woodie. Feel free to copy it exactly or modify it as needed. (This is intended as a slowing drogue for a 40-ish foot vessel.) 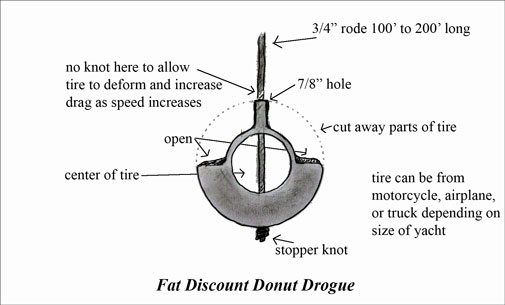 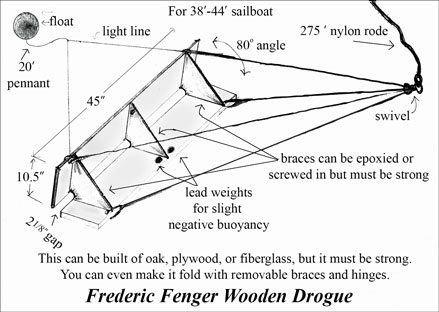 Sure, if you want the above to fold you can use galvy barn door hinges.

Of course, slowing devices are only limited by your imagination. Once I had my Gale Rider (made almost entire out of webbing) and a JSD aboard—I quickly had Carolyn sew me up an experimental Fat Flat drogue with JSD-type cones sewn onto webbing. We’ll soon be testing this not-patented (enjoy!) device off the Cape of Storms, and will get back to you with the results.

Here’s the simple truth: I sailed twice around the world on a $3,000 boat that carried more offshore safety gear than almost any vessel out there.

During a serious blow, an experienced seaman needs serious options. We had them. This gave us a level of comfort and confidence many other passage-makers lacked. While they panicked, we fluffed our pillows. And these options do not have to cost a fortune. We hand-made all that offshore safety gear for peanuts while naked and giggling in our cockpit.

The result: we have slept like babies in 50 knots.

So can you—if you put your pennies into strength and safety issues versus bullshit electro-doodads.

Cap’n Fatty Goodlander has lived aboard for 53 of his 60+ years, and is currently on his third circumnavigation. He is the author of Chasing the Horizon and numerous other marine books. His latest, Buy, Outfit, and Sail is out now. Visit: fattygoodlander.com