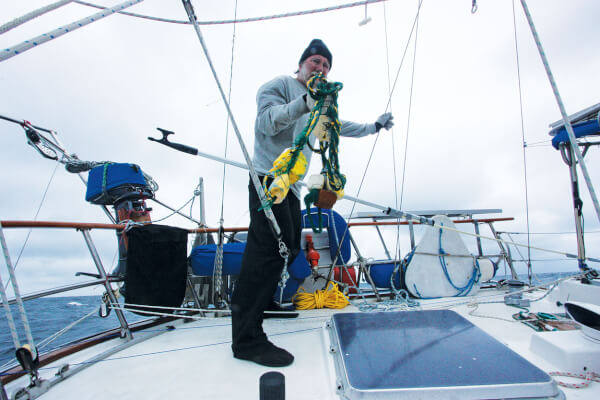 In sixty years of living aboard and offshore sailing, I’ve only been scared three times. Two of those times were in severe gales with massive seas and opposing ocean currents—and the third was ‘ditto’ with the additional complication of a jammed roller furler that wouldn’t allow me to reduce canvas.

Mostly, I can handle fear. I can gulp it down; I can push it back.

Terror, however, is another thing. Terror has a human element—and humans scare me in horrific ways that heavy weather cannot.

For example, near the beginning of our third circ, we hit a huge fishing net 25 miles off the coast of Ecuador. Faro Francisco had just dropped astern.

When I say ‘hit’ I’m giving the wrong impression. We sort of oozed up into it. There was no sudden shock, no noise, no nutt’n!

One minute we were sailing.

Then I felt that something wasn’t right—but I wasn’t sure what.

Then I glanced at our speedo—and realized we were still heeled, still under sail, and yet going 0.00 knots.

How could that be?

It was a large undulating bluish-green net.

I hastened to calm her. 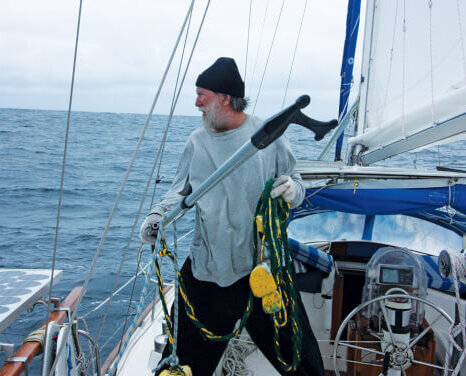 “Don’t be silly, kiddo,” I told her reassuringly. “Of course, I won’t allow them aboard!”

This area of the South American coastline is noted for its…er, its unexplained mysteries. Colombia is just next door. Sh*t happens here. Regularly.

Of course, not all the local bad guys plying these waters are dedicated pirates. Some are mere pirates of opportunity—fishermen seeking more profitable ventures.

There were two men in the open 26-foot fishing vessel. The short, fat one was aft—and he never shut up. He spoke dramatically—with wide gestures. We’d damaged his net. We owed him. We’d have to pay. Were we blind? He needed to be compensated!

They attempted to come alongside. I violently waved them off—in the massive sea that was running, they’d have done horrible damage to our topsides.

The tall fellow in the bow was the largest, longest-haired Aztec Indian I have ever seen. He stripped down and dove over the side majestically.

Our boat’s rudder shoe was caught on the net’s cables, severely chafing them.

The water was clear but the sun was setting and we were now losing light fast.

I turned on all my spreader lights and my bright stern light. I also fired up my big spotlight to assist the diver.

The fishermen’s boat appeared to be completely bare but from under a thwart he came up with a car’s headlight and lit it from a car battery awash close by his outboard. Since it was just the bare headlamp without a holder, it shined into his face almost as much as ahead.

He wanted money and he wanted it now—my Spanish isn’t good, but it was good enough to realize that the situation was getting more and more serious by the moment.

The Aztec diver attempted to clear the net from our rudder shoe—but it wasn’t easy. He was down a long time. Then I realized his arm was caught and wrapped in between two twisted cables of the net—and that he was drowning.

My first thought—heartless prick that I am—was that it wasn’t my fault.

…right before my eyes; just under the surface.

What should I do?

Again and again he furiously attempted to break the surface, only to be pulled back down. It was getting dark. He was getting weaker. I climbed down my transom swim ladder/platform until my legs were awash—and the next time he attempted to gain the surface, I was able to grab and hold the net long enough for him to bend his head at a sharp angle and get a huge lungful of air. Then the net was ripped from my grip. Twice more this happened, until I managed to grab him by his long hair and—and with the help of a large, surging wave—run up my heavy-duty swim ladder and haul his flopping, gasping body up on my aft deck.

This is exactly what I’d promised my wife not-to-do only moments before.

Oh well. Life is what it is. In crisis, we often do what we don’t expect. He was aboard, flopping groggily, and spouting saltwater like a cartoon whale.

I looked over and I saw the horrified look on Carolyn’s face. Things weren’t working out as we’d planned. Life is complicated. There are bad people in this world. Decisions made on the spur of the moment occasionally have lifelong consequences.

Suddenly the Aztec nimbly jumped to his feet and demanded a knife by using his open palm while making a sawing motion on his forearm.

He was huge—one of the largest naked men I have ever seen. And he was aboard my boat. Far offshore. And no one knew. And he was asking for a knife. And I was unarmed.

Were he and his partner so destitute that they didn’t even own a knife?

Had he dropped his knife? Should I give him another one?

That didn’t seem wise. He dwarfed me. His washboard stomach was all abs. He rippled with muscles. He was like a handsome, sleek monster—a wholly uninvited monster I wanted nothing to do with.

“Well,” I said calmly to Carolyn after making my decision, “Give the man a knife!”

Carolyn glared at me, ducked down below, and handed out a small serrated steak knife.

The angry Aztec Indian immediately and dismissively threw the knife down hard into the cockpit sole, and made a bigger, more exaggerated gesture this time.

“A big knife, please,” I said to Carolyn firmly.

She obviously didn’t want to.

My eyes ordered her in uncertain terms—so she ducked back below.

This time she came on deck with a huge kitchen knife—its long blade glinting in the starlight. Holding the knife by the back of the blade, she handed it to me and I nonchalantly passed it to the naked Aztec, hiding my trepidation.

The tip of our knife was now within two inches of my soft, cringing stomach. He had an eager look on his face. I could see something like hellfire dancing in his eyes.

One twitch and I would be dead.

My brain was screaming that I should do something, do anything—to knock him overboard, hit him repeatedly with a winch handle, or try to rush below with Carolyn.

I did nothing. I decided that anything I did would be wrong.

I didn’t flinch, I didn’t speak—I knew instinctively that anything sudden or dramatic would be a mistake… a fatal mistake.

I wanted to blubber like a baby but knew I couldn’t—or, at least, shouldn’t.

The Aztec looked at Carolyn for a long time. He elevator-eyed her. She closed her eyes.

He looked at me and I saw contempt in his eyes.

It was now quite dark.

Then he tilted his head malevolently and looked into the cheery golden glow of our varnished home—which even to me looked like it contained fabulous wealth begging to be plundered.

He was having difficulty deciding whether to kill us or not—adding up the pros and cons.

I could see her lips trembling.

I could hear the blood pounding in my ears—I was expecting to pop my cork any second.

The tension was immense.

Our whole world was vibrating.

He continued to stare down belowdecks at our shining teak-and-polished-bronze interior —almost as if he was weighing the countless buckets of gold within.

Then his shoulders relaxed and he said to me… actually, I don’t know what he said to me but what I heard was, “You are one lucky motherf**ker!” as he suddenly dove back into the water and began savagely hacking away at the net

Now this massive net, which appeared to run from horizon to horizon, had large poly ropes holding it together. These ropes were under tremendous strain. The Aztec made many dives. He hacked away.

I had a moment to think—and what I decided was… that if he chopped those cables apart, he and his buddy would have their hands full attempting to save their net.

They wouldn’t be focused on us. We could escape.

This was a comforting thought—and totally wrong.

Suddenly, our 43-foot ketch shook—and we were free.

The wind had increased a bit. I trimmed for speed.

The fat man started yelling. He didn’t give a damn about his net—he wanted us!

But it took him a while to get the Aztec back aboard, and then he ran into his own net and fouled his propeller.

By this time we were a considerable distance away—and still ablaze with light.

He and his boat, however, were in blackness. But I could hear the roar of his engine approaching—we only had seconds left.

“Carolyn,” I shouted as he turned on his bare automotive headlamp, “shut off the main battery switch—now!”

Instantly, our vessel was plunged into darkness as I jibed her over to starboard and watched him continue in a straight line with his night-vision-destroying searching spotlight waving straight ahead.

My heart was in my throat.

Every second was another meter or two between him and us.

Yes, we could see him eventually making giant circles to find us—but by then we were far away.

The following day we realized that sections of the net were still attached and trailing from our rudder shoe. I had to heave-to and cut them away.

Forty-two days later (the Pacific is big) we arrived in the Society Islands—just around the time we’d both got our breathing back under control. 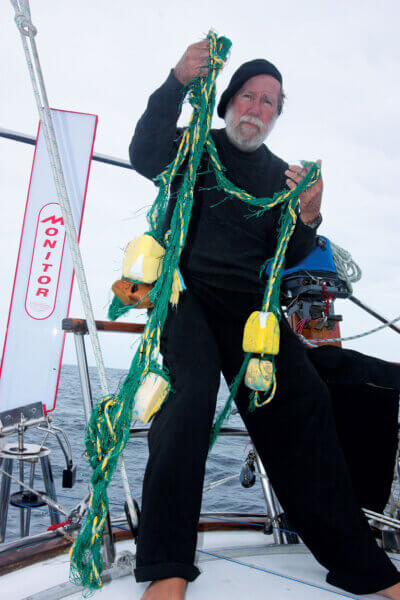