ALL AT SEAThe Caribbean's Waterfront Community
HomeFishSports Fishing in the Caribbean: What’s Biting, Where & When
Fish

The Caribbean’s year-round warm sunny weather makes it easy to go fishing, inshore or offshore, by private boat or charter. Yet, what might be surprising is that there are seasons when some species are more plentiful. These seasons aren’t uniform but are based on an island’s location in the region and more specifically on a species annual migratory patterns in those waters. Therefore, while you can catch fish 365 days a year from every Caribbean island, if you are targeting a particular species, then check on each island’s season. Here is a sampling of what’s biting where and when.

There’s much more water than land in the Caribbean, with the Atlantic Ocean to the north and east and Caribbean Sea to the south and west, so it’s easy to see how this region is one of the best in the world for sports fishing. Local anglers and fishermen from all over the world come here to enjoy everything from bending a rod to pursuing world record catches. That’s not all. In addition to water volume, there’s variety. The volcanic heights and depths of the islands have created an array of marine habitats, from shallow coastal flats to deep sea trenches, which support over 500 species ranging from bonefish to billfish.

Fads are the Latest Trend in Sport Fishing

Summer Fishing in the Caribbean

During this period, “we usually have good action with wahoo and dorado (also called mahi-mahi or dolphin fish) under weed lines and driftwood,” says Capt. Chris Hackshaw, manager at Hackshaw Boat Charters Ltd., in St. Lucia.

Yellowfin tuna is key to target off Grenada in the summer.

“Most average over 100 pounds and some over 200 pounds,” says Capt. Gary Clifford, who runs his True Blue Sportfishing operation out of the Port Louis Marina, in St. George’s, Grenada. “We hold our Spicy Tuna Tournament in August or September each year.” 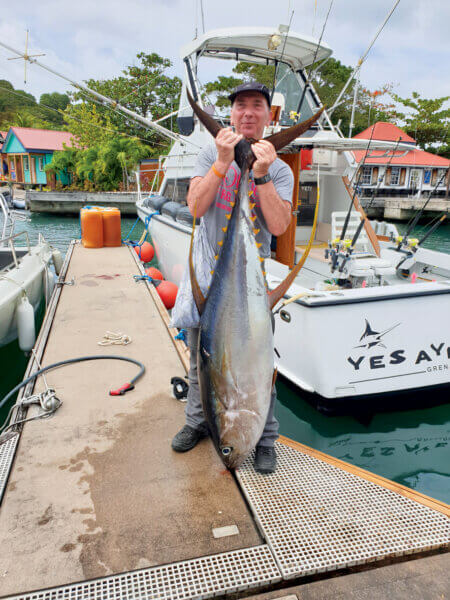 This is the favorite time of year to fish in the Virgins, says Double Header’s Maltby. “We have a very consistent and predictable wahoo bite on the October and November full moons as well as a good variety of other gamefish. There are still marlin around, especially on the north side, and in the last few years there have been some big yellowfin tuna.

October is sailfish season in Barbados.

“The weather is great and there are lots of sailfish around,” says Josh Delmas, director of the Barbados Game Fishing Association’s (BGFA) Barbados International Tournament.

Cap Cana, in the Dominican Republic, transitions from a white marlin to blue marlin fishery in the fall and lasting until January, according to Alvarez. “The blues go for the FADs (Fish Aggregating or Attracting Devices) off of Macao (a beach on the island’s far east end north of Punta Cana).” 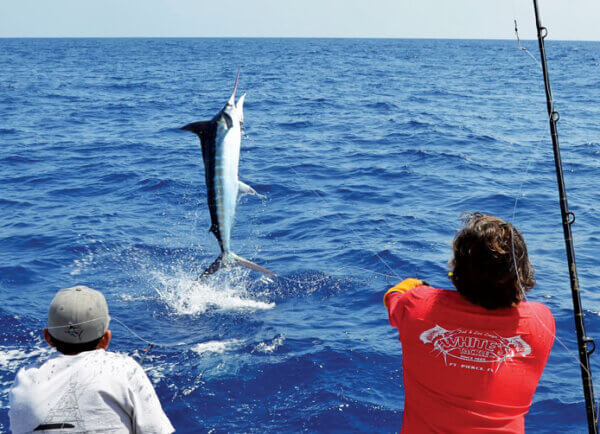 Winter is when billfish numbers really start to pick up off Grenada, hence the annual timing of the Republic Bank Spice Island Billfish Tournament at the end of January. In 2019, the 74 boats participating released 151 billfish, including blue marlin, white marlin and sailfish.

January and early February are when there’s a run of sailfish out of Marina Casa de Campo, in the Dominican Republic, and in February the blue marlin start to gather around the offshore FADs.

“January to April, especially the end of February, are the most productive for blue marlin off Barbados,” says the BGFA’s Delmas. “This February was especially great with some boats releasing 3 to 4 marlin a day.”

There’s also a decent, albeit relatively unrecognized, sailfish bite off Virgin Islands waters through February or March, according to Double Header’s Maltby. “It is an interesting fishery because a lot of the sailfish that we catch are in close to shore. We have caught them in as shallow as 50-feet. They are mostly a bycatch when we are targeting kingfish and blackfin tuna on our deep inshore reefs.” 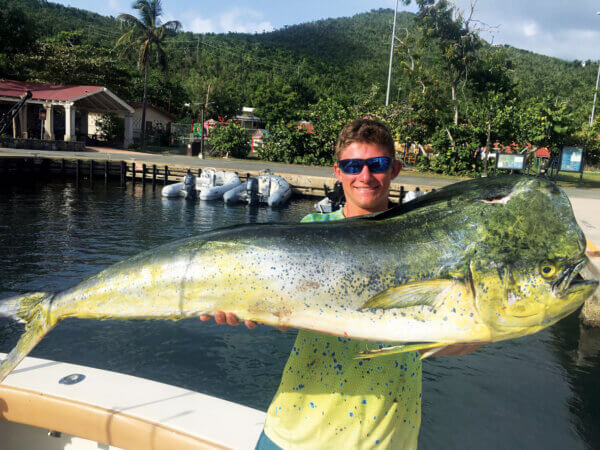 This is blue marlin season out of the Dominican Republic’s Marina Casa de Campo.

Some years there is a fair marlin bite during the spring in the U.S. Virgin Islands on the South Drop.

“The deep water between St Thomas and Saint Croix sees a run of mahi-mahi from March till May. While the sport fishing boats are targeting the mahi they frequently encounter both blue and white marlin,” says Double Header’s Maltby.

South in Barbados, spring is when the main run of mahi usually show, says the BGFC’s Delmas. “The best chance of a bigger bull mahi is first half of the year, while the second half usually produces fewer and smaller fish. Beyond that, sports fishing is a truly year-round activity that everyone can enjoy.”