The old saying that ‘when one door closes another door opens’ certainly applies to the career of Captain Colleen Korona. In fact, it was twice being unemployed that led Korona to her dream career as a yacht captain. Today, she is at the helm of the Leopard 46 catamaran, Firefly, term chartering year-round in the U.S. and British Virgin Islands.

Though having entered her preferred profession later than some of her peers, salt water started flowing through the Florida native’s veins at an early age.

“My uncle was an avid surfer and sailor,” says Korona. “He always had Hobie cats and surfboards laying around and never hesitated to say, ‘Give it a try! Don’t worry about breaking it, just have fun.’”

Korona worked a shoreside nine to five job for many years managing a mental health office and nuclear brain imaging facility. Then, the US economic market crashed and she was out of a job. A few years later, she and a friend sailed north from Key West to Block Island, then from Hampton, Virginia to Tortola, BVI on a 38-foot Shannon. The two stayed and played in the Virgins for a while, before continuing south to Trinidad & Tobago. It was during this time that Korona started picking up a paid charter gig here and there. This led to a crew position for several seasons aboard a historic tall ship that sailed the Virgins. One day, the ship was struck by a car ferry traveling to Spanish Town. The next day, Korona found herself unemployed again.

“I had been complacent in my position as first mate/stewardess and deckhand, but unemployment basically forced me to take the next step and get my captain’s license,” she tells. 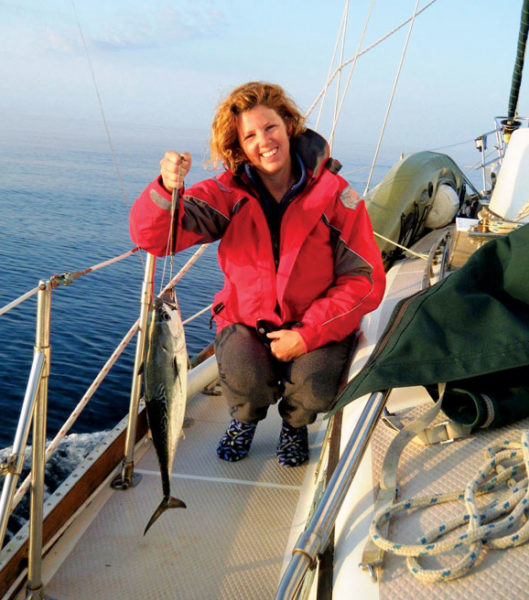 Substantial sea time is one of the requirements for a captain’s license. Korona had many miles under her belt cruising aboard the Shannon. However, once she began working on charter boats her hours increased substantially. This included sails north to the US East Coast from the Caribbean, and working aboard vessels that included day boats, term charters, monohulls, catamarans, trimarans and power yachts. One of these was a beautifully restored classic 85-foot Trumpy motoryacht whose owner cruised throughout New York, Rhode Island and Maine. Since becoming licensed, Korona has run catamarans from 44- to 53-feet, delivered a 44-foot trawler from Fort Lauderdale to the BVI, oversaw a $120,000 refit on a 43-foot cat and delivered it from the USVI to Port Canaveral, and is now aboard Firefly.

“I admit it took me awhile to settle into the role and get comfortable with the responsibility of someone’s expensive vessel and the people on it, but captaining is a perfect fit for me and it’s a great profession if you have the people skills and stamina. General duties include, keeping the boat clean inside and out, engine maintenance, being able to repair general electric items, fix broken heads or showers, change out pumps, oversee and coordinate major repairs as well as correspondence with guests and owners. I always laugh and say a captain’s license just makes you a glorified plumber and mechanic. You must be able to adapt to the boat, weather and guests needs. That means never saying, ‘That’s not my job,’” she says.

Korona claims she sees more women every year enter the marine industry at the helm. The only challenges, she says, is occasionally not being taken seriously by mechanics and yard workers.

She advises: “Just do it!  There is definitely a niche for female captains and I think women get a pretty good reception overall from brokers and owners. You would be surprised at how many bookings we get because I am a female captain. It does set us apart. Of course, my boyfriend/mate’s amazing cooking is a big factor too!”