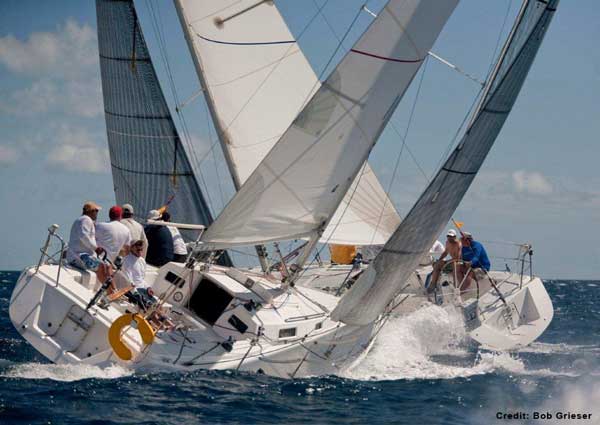 Mother Nature dialed up the breeze to 20-plus-knots on this second day of racing at the Puerto Rico International Regatta, putting both sailors and their boats to the ultimate test.

“Sailing today was much tougher than yesterday,” says Puerto Rico’s Jaime Torres, who is skippering his Beneteau First 40,Â Smile & Wave, in Spinnaker A. “We started in about 15 knots of breeze, but by the afternoon it was blowing 22 knots with 4- to 5-foot seas. This made for challenging racing. At one point we broached and had the spreaders in the water.”

In spite of being over early at the start (OCS) of the second of four races sailed today, Torres and his crew droveÂ Smile & WaveÂ to within one point of class leader, St. Maarten Frits Bus’ Melges 24,Â Coors Light.

“That OCS may have cost us the regatta,” says Torres. “Then again, we’ve been very consistent in our boat speed and our tactics. We hope we will be able to hold offÂ Coors LightÂ tomorrow and win.”

Puerto Rico’s Luis Juarbe’s Henderson 30,Â Soca, rounds out the top three boats on the scoreboard in the Spinnaker A class after two days of racing. The good news is that Juarbe had a lot of talent on board, including boat builder Glen Henderson. The bad news was that a break down in the third race put them out of competition for the day.

Forty-five boats in nine classes sailed offshore between Puerto Rico’s southeastern mainland and the island of Vieques, racing on a mix of windward-leeward courses and courses with reaches for the cruising classes.

While the big boats reveled in the brisk breeze offshore, 15 junior sailors in Optimist dinghies and 2 juniors in Lasers competed closer to shore in the Puerto Rico International Dinghy Regatta. Even inshore, just off Punta Candelero, the winds were blowing 15 to 20 knots with 2- to 4-foot waves.

“The advanced sailors are accustomed to heavy winds and rough weather,” says Jose ‘Yoyo’ Berrios, sailing instructor at Club Nautico de San Juan, who brought some of his sailors to compete. “So for them, it was great conditions and an excellent experience. It was also a lot of fun.”

On Sunday, there will be a first-ever stand-up paddle boarding (SUP) exhibition and competition. The event will start at 10 a.m. Paddle boarders will have two courses to choose from, one that starts within the marina and a longer course that starts at Punta Candelero and then winds through the canals of Palmas del Mar.

Meanwhile, Sunday also marks the final day of racing in both the Puerto Rico Heineken International Regatta and Puerto Rico International Dinghy Regatta. On this day too, ONDECK Sailing’s Farr 65, Spirit of Juno, will welcome a yacht full of crew from Club Nautico de San Juan who will be out to enjoy the competition.