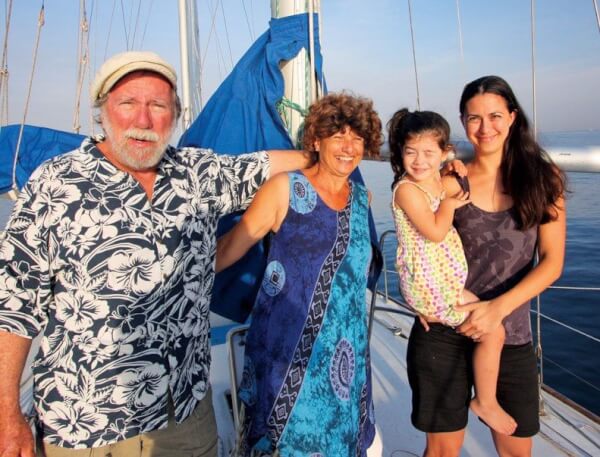 I am continuously amazed at how much time, talent, and money ordinary people lavish on their boats. It seems crazy, really. I live on my yacht, sail on my yacht, and do research for my writing on my yacht. It is my home, my hobby, my sport, my office, and my profession. So, yeah, I’m fairly attached to my vessel. But most people aren’t in this category. They are boat owners (or loan holders) who only get to occasionally visit their vessels for brief periods—when they get time off for good behavior. Still, their vessels are front and center in their lives.

One of my best friends purchased a 38 foot sloop about eight years ago—hoping he and his wife could go cruising. She wasn’t into the concept as much as he. It became a bone of contention. He came to me and said, “She hasn’t spent one night aboard… not one single night ever! And I have begged and begged her!” They divorced. My friend now has less free time—with his visiting rights, etc. Plus, he has to work far more hours now to pay child support and alimony. Thus, he hasn’t moved his boat away from the dock in two or three years—and he’s getting further and further in debt.

I suggested, gently, that perhaps he should sell the boat—which was costing him $1,200 per month.

“What?!?” he said, the outrage and betrayal plain in his voice. “Why would I do that?”

“Well,” I said lamely, “you know—to save money and get out from under the hassle.”

“Naw,” he said, shaking his head as if to clear it of heresy, “I’ll keep the boat to… you know, just in case.”

I didn’t know—not at the time. But I think I do now.

Buying a boat is the physical embodiment of embracing the dream of freedom and adventure—no matter how much misery said purchase brings.

My father was dying of Parkinson’s disease and barely able to get out of bed—when he purchased a very racey 36-foot lofty sloop which he renamed Miss Marie after my mother. He knew he’d never sail it. A few month later, he fell overboard and didn’t have the strength to pull himself back aboard. Still, the boat invigorated him. He glowed when he spoke of her.

She gave purpose and direction to his final days.

Ditto, Steve Jobs. He knew he was dying when he commissioned his giant, super expensive mega-yacht. And he could have cancelled it early in the project for a modest loss. But that would mean admitting to his impending death—and letting go of the dream of peace, tranquility, and family which drove him his entire life. Mentally, he knew he was going to die—emotionally, he was in denial, and the boat is 100 tons of proof.

I used to deliver a very expensive sailboat to the Caribbean and Europe from the East Coast of the United States. The owner would often command the boat to be somewhere to meet him—and, hey, it was his nickel. But the owner was a busy man, and often missed his own schedule. Thus, the boat would regularly shift across oceans for no reason.

Once the boat went 19 months without the owner or anyone sent by the owner stepping aboard. Finally, I talked to some of his family and friends. They said there was a huge photograph of the boat in his Galveston office, and he’d call in workers from his vast oil empire and berate them mercilessly while jabbing a finger at the photograph—and screaming, “If you weren’t such a hopeless screw-up, I’d be sailing now!”

Ah, human nature is so complex.

They say we humans are thinking creatures—HA! Not around the water, weren’t not.

Once upon a time I consulted with folks who wanted to buy their first cruising vessel. I figured this would be a great match—and there would be lots of job satisfaction. I was wrong. The buyers and I would spend months together deciding exactly what type of vessel to logically buy—and equipped with exactly what equipment they’d need for the use intended—and then they’d go out a buy a pink one.

The first few times I was appalled. “But, but…” I’d sputter, “but we agreed on a 45 foot cutter-rigged fiberglass boat—not an 88 foot schooner with a squaresail on the fore…” and they’d respond with, “…yeah, but isn’t the pink topsides way cool?”

I know a blind guy who skippered his vessel around the world (with a sighted wife).

Recently I met a different couple in Opua, New Zealand—two nearly blind sailors with such poor vision that couldn’t see a mooring ball even while they were touching it. (They had to get in their dinghy and be within a foot before they could recognize the ball and pick it up.)

The Little Things that Matter for Happiness While Cruising

I can think of nothing scarier than to be blind and crawling to the foredeck in a gale to reduce sail.

Why would people put themselves in such a situation?

Of course, I can kinda understand the “dip your toe in, and see if you like it,” school of thinking. My blind friend with the sighted wife spend a decade in preparation—even having a custom ‘dry’ gimbaled Braille compass made that he could steer-by-feel with. All his vessel’s running rigging—even the anchor windlass—led back to the cockpit.

But what about the landlubber who, literally, jumps in at the deep end?

There was a very fat lady whose husband left her for a younger, thinner woman—who decided to sow some wild oats. She answered an online romance ad—and flew to meet an equally old, nearly blind fellow who needed a pair of eyes. “Perfect,” she said. “You can’t see how fat I am—we’re a perfect match!”

They set off on a shakedown cruise. She fell over. He thought she might have gone overboard—but wasn’t sure. She could see him searching the whole boat on his hands and knees, calling out to her. Despite his blindness, he managed to search in a grid and come fairly close to her twice—just, alas, out of earshot.

“He looked so sad and forlorn,” she said later. “I felt so sorry for him—he was in such obvious pain. My heart really went out to him. Poor guy!”

But he gradually searched further and further away. And then night fell. And by dawn, she was getting tired and delirious. And one point, she imagined a boat heading right at her. Then something struck her in the head, “Damn it!” she cried out.

It was another single-hander—scared out of his wits by her.

There was a sea running. For hours and hours he tried to get the large woman aboard—and failed miserably. So he dashed to his SSB radio, and started screaming for assistance—“I’ve hit a whale, a human whale!” he broadcast without response.

He decided to forget about getting her aboard—that he’d tow her to land. But Big Beauty Whale Babes (BBWBs) tow very slow. And another night went by before he could get into a harbor, and maneuvered next to a hoist.

Just as they were lowering the travel lift straps for “the largest mermaid ever,” her blind skipper sailed in, sad and forlorn.

“The moment I saw him, I knew I was in love,” she said later, “And, of course, how much I dug the cruising lifestyle.”

They went on to spend a number of years cruising together in the Caribbean—with an extra large outboard hoist and stout bosun’s chair fitted on their transom.

Another ‘Internet Bride’ arrived in the Caribbean to try her hand at sailing—just as a hurricane bore down on the Lesser Antilles. Her new skipper—delighted to have companionship at last—failed to mention the approaching breeze. He didn’t want to scare her.

“There’s nothing to it,” he told her, “sailing offshore is simple, really. All you have to do is occasionally help me take down the sails—that’s all.”

They shoved off. The hurricane rolled upon them.

“Gosh,” she thought to herself, “this is rather rougher than I expected.” But she didn’t want to be a wuss—after all, he probably did this every day. Faster and faster they went. Harder and harder they pounded. Louder and louder. Stronger and stronger… and then, with a mighty crack, the entire rig went over the side.

The broken mast—half on the boat and half in the water—started smashing into the hull.

The skipper dashed on deck, hollering with rage. He whipped out his rigging knife, and fell upon the flogging mainsail. She shrugged, and followed. She’d been told she should help taking the sail in—and that’s what she was doing.

“You’d think there’d be an easier way,” she shouted thoughtfully as the seas washed over them.

The Dream is powerful!

When I was building my 36 ketch in Boston, I couldn’t bear to see sailboats in the harbor—it was too painful. I’m 63, and have lived about for 55 years—and those few years I lacked a boat were consumed by acquiring one. My entire life has been spent either at sea or attempting to get there. And yet this lust for sailing is hard to put into words. Recently someone asked me why. “There’s rare air out there,” I said, “Air which no one has breathed first. I have my whole miniature country with me—even my queen! God’s face is in every wave and on every cloud. Such freedom, once tasted, is forever desired.”