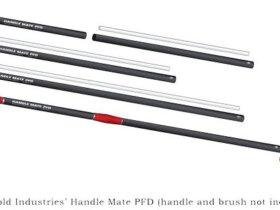 Close your eyes. Now, sail a boat. Feel the tension in the lines, listen to the waves against the hull and smelling the freshening of a sea breeze. This is what sailing blind is all about. It’s something that U.S. Virgin Islands’ sailor Jim Kerr tried at the age of 74 and thrived in both fleet and match racing thanks to his lifelong athletic nature and adventurous spirit.

“It’s a rebirth for me,” says Kerr, a native of Sheboygan, Wisconsin which, ironically, was the location of his first sight-impaired event last year at the IFDS (International Federation of Disabled Sailing) Disabled Sailing World Blind Match Race.

Kerr didn’t grow up sailing. However, he was a gifted athlete who lettered in high school and college in track and swimming. A love of these two sports provided a springboard for Kerr to venture into more unfamiliar territory like pistol shooting, equestrian show jumping and fencing. His skills landed him as an alternate on the Modern Pentathlon team representing the U.S. at the 1964 Olympic Games in Tokyo.

Meanwhile, Kerr’s parents had retired from their jobs in Wisconsin, purchased a Cal 24 sailboat and headed south to cruise the Caribbean.

“I caught up with them in St. Thomas,” Kerr says. ”Once back in Texas, where I was in grad school at the time, I couldn’t get the color of the water out of my mind. So, I moved my body to where my mind was in 1976.”

Kerr got his feet wet racing in beer can races with the now-defunct Royal Frenchtown Yacht Club. Here, he became a part of a motley crew aboard a Pearson 26 who harmonized their skills enough over three years to win their class in the then-named International Rolex Regatta in 1983. Kerr maintained his love of landsports and represented the U.S. Virgin Islands in fencing at the 1984 Summer Olympics in Los Angeles. Then, he put his sporting life on hold to spend more time with his wife who passed away of cancer. Eight years ago he lost his sight.

“Imagine my surprise at being dusted off and chosen to be part of the USVI Paralympic Sailing Team,” says Kerr.

Kerr’s first step came last year when he traveled with the team to compete in the C. Thomas Clagett, Jr. Memorial Clinic and Regatta, in Newport, Rhode Island. This 13-year-old must-do event for adaptive sailing is conducted by world renowned coaches, and competitors hail from around the globe.

“The Clagett was unbelievable. Coaches like Betsy Allison were out on the water each day giving encouragement and training tips to help us improve,” says Kerr, who little more than one month later raced with two other crew from the U.S. and finished third at the IFDS Match Race in Sheboygan.

How does sailing blind work? In fleet racing, according to Blind Sailing International, teams of four people (a visually-impaired helmsman and crew with sighted tactician and crew) race 22- to 30-foot keelboats. These integrated teams, racing under the normal rules of racing, assure that there is the communication between crew necessary to ensure the same close tactical competition as with any other racing fleet. Italy’s Homerus Organization developed blind match racing rules. Partially sighted and sight impaired race identical boats around a course marked with audio sound buoys.

Most recently, Kerr and USVI Paralympic Sailing Team members Tony Sanpere, Dave Flaherty and Robert Blackwell finished second in their class at the St. Thomas International Regatta. Up next, Kerr and the team are training in the Sonar, where Kerr mans the mainsheet, and fundraising in order to compete in the IFDS World Championships in Melbourne, Australia, in November, and qualify for the 2016 Summer Paralympics in Rio de Janeiro, Brazil.

“I thought my days of world class competition were over,” says Kerr. “This just shows that losing your sight doesn’t mean you can’t adjust to a wonderful world on land and sea.”