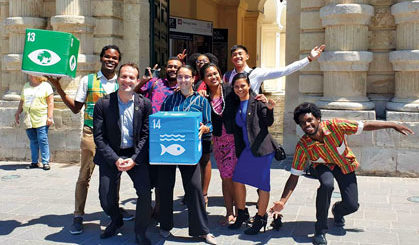 What glows like a ruby or sparkles like a fine emerald yet hovers like a helicopter and flies with an agility that aeronautical engineers will never be able to duplicate? With wings beating at 50-90 strokes per second, hummingbirds are the aerodynamic wonders of nature. Their rapidly beating wings create a vibrating hum thus giving hummingbirds their common English name while some Spanish speaking peoples know them as “el zumzum”.

They can fly forward, backward, up, down, to the right or left, and upside down as well as hover. They have been witnessed keeping up with au tomobiles traveling at 45 miles an hour while others have been clocked at almost 60 miles per hour during flight. Their flight prowess and acrobatics are attributed to tiny wings that provide power on both the down stroke and up stroke unlike other birds whose wings only have power on the down stroke. Flexible shoulders allow hummingbirds to rotate their wings in a figure 8 pattern giving them the ability to hover.

Hummingbirds differ in size from a mere 2”, the Cuban Bee Hummingbird who weighs in at 1/14 of an ounce, to the 8” Patagona Gigas which sports regal 13” tail feathers and is found in the Andes of South America. Their long slender beaks range in size from 1” to over 3”, a feature determined eons ago based upon the kinds of flowering plants upon which each species feeds. Hummingbirds are found only in the New World, or Western Hemisphere, and they range from sea level habitats to 16,500 feet bordering snow lines in mountainous areas.

The Caribbean islands lay claim to approximately 16 species with some species flying inter-island as well as back and forth to the mainlands. The tiny Ruby-Throated hummingbird migrates from the U.S. all the way to Central America to winter, a distance of up to 3,000 miles.

Said to be the most common hummingbird in the West Indies is the Antillean Crested pictured above. In addition there are the Antillean Mango, Bahama Woodstar, Cuban Bee, Cuban Emerald, the Blue-Headed and Green-Breasted Mango found on Dominica and Martinique, the Green-Throated Carib found in the Virgin Islands, Puerto Rico, and the Lesser Antilles, the Green Mango and Emerald of Puerto Rico, the Hispaniolan Emerald, Jamaican Mango, the Vervain from Hispaniola and Jamaica, the Rufus-Breasted Hermit on Granada, the Purple-Throated Carib found throughout the Caribbean, and the Streamertail from Jamaica which has two long, thin tail feathers that emit a whirring sound in flight.

Hummingbirds have the most rapidly beating heart, highest metabolism, and fastest digestive systems of any vertebrate. They feed primarily on the nectar of flowers and in doing so provide an invaluable service in the pollination of flowering plants. They must feed every 10 minutes and consume a whopping 3-7 calories per day which equates to approximately 150,000 calories per day for a human.

In addition to feeding upon nectar some hummingbirds will take flying insects, diving like fast little bombers allowing no chance for the slower insects to escape. Hummingbirds are fearless fliers due to their stealth and maneuverability leaving them few enemies in the skies. They will even take on much larger hawks as the hawks scout the land below for prey; the hummingbirds dive bombing the hawks until the hawks give up and seeks less worrisome flyways.

Hummingbirds have tiny feet, virtually useless for anything other than gripping a branch upon which they land. If a perched hummingbird needs to move down the branch even an inch or so he will fly rather than walk. The iridescence emanating from many species’ feathers is due to the refraction of light on specially hued feathers that appear to change color as the hummingbirds fly about creating flashes of brilliant greens, purples, reds, and blues.

Females build tiny, cup-like nests constructed generally of moss, feathers, hair, and bits of plant fiber that are held together with spider webs. The female hummingbirds lay 2-3 tiny oval shaped eggs that hatch approximately 2 weeks later producing very tiny, featherless, blind chicks. The females guard and feed their hatchlings for about 3 weeks at which time the young are fully feathered and ready to fly away.

As more and more habitat disappears it is incumbent upon us to make sure our tiny hummingbirds do not also disappear. It takes very little effort and even less expense to provide the flowering plants upon which hummingbird species specific to our areas feed. Even apartment dwellers can set out potted flowering plants on balconies and in window boxes. Once the hummingbirds find our offerings they will return year after year for they are quite intelligent and have excellent memories both for food sources and those who would feed them.