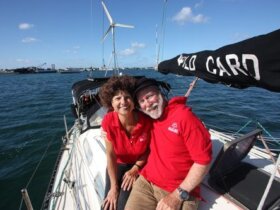 Antigua and Barbuda resident’s loyalty was split three ways when it came to cheering at the 36th America’s Cup, which sailed in March in New Zealand. That’s because three island sons each raced on different teams. Shannon Falcone, with five Cups already under his belt, sailed for the Italian Luna Rossa Prada Pirelli team. Louis Sinclair, who was on the roster for Oracle Team USA in the last Cup, served as a grinder for Cup winner Emirates Team New Zealand. Sinclair’s younger brother, Alex, made his America’s Cup debut as a grinder for the New York Yacht Club’s American Magic. It’s incredible to consider that one island nation that measures a little more than half the size of New York City can boast not one, but three sailors in the most recent America’s Cup.

A Sport Started in Childhood

Falcone was born in England and sailed to Antigua with his family at age 3.

“In my generation in the Caribbean, there wasn’t the dinghy program that there is now. As a kid, you got into keelboats, big boats right away. Maybe it was sailing with your parents or your parent’s friends. Heineken, Rolex, BVI, the Classics and Sailing Week, we did them all. The Caribbean has always attracted big talent. So, there you are as a kid, sailing with professionals and it was something to really soak up,” says Falcone, now age 40.

Falcone also sailed Stars with his father Carlo Falcone, who competed in the same boat at the 1992 Summer Olympics. He left home at age 19, completing ocean deliveries, a circumnavigation, Louis Vuitton Cups and two Volvo Ocean Races along the way. Falcone won the 2010 and 2013 America’s Cups as a member of Oracle Team USA.

Louis Sinclair, now age 29, started sailing at the Antigua Yacht Club when he was in primary school under coach Karl James. He decided to turn pro as a teenager.

“I feel lucky to have gotten the opportunity to join a sailing boat in English Harbour when I was 17. That set me on the path I am on now 12 years later,” says Sinclair.

Born in New Zealand, Sinclair was raised on his mother, Nancy Nicholson’s, home island of Antigua. Louis’s big boat experience is impressive having raced aboard Leopard 3 and 100ft Super Maxi Comanche in the past. He has Volvo Ocean Race experience and is now a two-time America’s Cup veteran.

“I feel extremely fortunate to be sailing at a high level of the sport and a lot of that is thanks to growing up in Antigua. As a kid, you spend a lot of time in and on the water which gives you such a great foundation for any water sport really. I started sailing with Karl James as an after-school activity and things took off from there. That and the combination of having many high-performance race boats based in Antigua for their Caribbean season gave me a great pathway into the sport as long as I was willing to work hard enough.”

Sinclair left the island after high school, obtained his Yachtmaster certificate in Europe and embarked on a professional sailing career culminating in making the American Magic America’s Cup Team.

Looking ahead, all three men have impressive sailing plans. Falcone is team captain for Antigua & Barbuda in the new Star Sailor League, and the Sinclair brothers are both on the SailGP tour, Louis with New Zealand and Alex with the U.S.

What advice does each of them have for young Caribbean sailors who aspire to sail professionally in the upper echelons of the sport?

“Today, being a good sailor is not enough. You must be good at everything, being a team player, open-minded, sharing ideas, understanding other points of view and communicating well in a big team. Secondary skill sets are important too. That could be being good at hardware, or rigging, electronics or hydraulics. Look to apprentice in these systems,” says Falcone, who in 2013 brought the Cup to the National Sailing Academy in Antigua to show and inspire the next generation.

Louis Sinclair recommends, “Get a full-time sailing/racing boat and work your way up from there. Starting on dinghies is good when you’re young, but to make a career of it, it helps to learn the big.”

Finally, physical fitness is especially important so the earlier you can start training the better, says Alex. “Work hard and stay focused, opportunities will present themselves. And take advantage of living on a Caribbean island, get out on the water.”