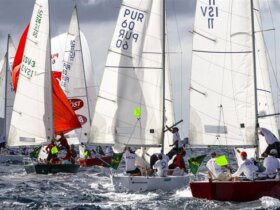 Following on from the success of the inaugural Royal Ocean Racing Club’s Caribbean 600 race held in conjunction with the Antigua Yacht Club, Antigua is gearing itself up for the club’s Classic Regatta, to be held between 16th and 21st April, and for a revamped 42nd annual Sailing Week which starts on 25th April.

In the four decades of Sailing Week the nature of the racing has changed. Yachts have become larger and there has been a greater emphasis on racers (Division A) rather than cruisers (Division B). There is still good demand for cruisers and bareboats and their format has remained largely unchanged, but substantial re-planning of the racing courses for Division A has taken place.

Unofficially, Sailing Week commences on Friday 24th with the race from Guadeloupe to Antigua organised by the Antigua yacht Club in conjunction with the Sailing Week Committee. Although designed as a race for French yachts coming to Antigua for Sailing Week some yachts from Antigua have sailed in the past down to Guadeloupe to take part in the race, particularly those interested in setting a course record.

For 2009 all Division A starts and finishes will be off Falmouth Harbour. No longer will the racing yachts be required to anchor off the north west of the island or overnight in Jolly Harbour. The Yachting World Round the Island Race, once a two part race, will now be a complete circuit of Antigua. Added back into the calendar is a race around the island of Redonda sponsored by watchmaker Corum which, together with Round the Island Race, will create a mini-series.

Division A racing starts a day earlier than in previous years as does racing for the performance cruisers in Division B. Within Division B, courses are now split between the bareboats and performance cruisers, the latter still getting a Round the Island race, anti-clockwise, but, as in the past, with an overnight break at Fort James. The bareboats meet up at Fort James by taking the shorter, clockwise, route.

In Division A, not all the yachts will pass around the island of Redonda in the Round Redonda race. The smaller and slower yachts will be given a mark laid in the direction of Redonda enabling all Division A classes to finish at approximately the same time.

In Division B, both bareboats and performance cruisers meet up again for an overnight at Jolly Harbour mid week before returning to Falmouth to join the racing yachts from Division A.

Lay Day, the usual party day, has been removed from the calendar except for the bareboats. With the increasing value of yachts and more serious racing and, therefore, more responsible crew, Lay Day had declined in popularity over the years. Despite this, Antigua Sailing Week has always been a social regatta particularly for those in bareboats who often make a pilgrimage to Antigua for their annual sailing holiday. The bareboats will keep Lay Day traditionally held on the Wednesday.

Also in keeping with tradition, the bareboats will retain their championship Gold and Silver race held between the top performing bareboat yachts as the last race of the week.

After a series of races for both Divisions off the south of the island, Sailing Week, having started a day earlier, comes to an end a day earlier than usual unless there have been any abandoned races in which case these may be rerun on the Friday.

The new format to Antigua Sailing Week should introduce variety for all competitors and create more interesting racing. www.sailingweek.com.

Editor’s note:  On February 18, organizers of Sailing Week posted this statement on their website:  “Following the news that our title sponsor has been charged in the USA by the SEC [Securities Exchange Commission], we would like to reassure all the participants and those planning to attend this year’s Antigua Sailing Week that the regatta will be going ahead as planned. The organizing committee will ensure that the racing on the water is not compromised in any way by this turn of events … We will no doubt be financially challenged if the balance of the sponsorship does not materialize but we can adjust our budgets accordingly. However on a positive side we do have a new Gold Sponsor in the form of Corum Watches who have become our official timekeeper and this will help offset any shortfall … We may be missing some of the frills this year but we will still be providing the thrills!!”