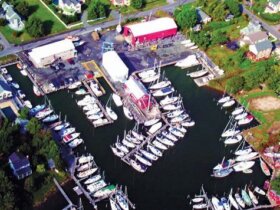 It’s difficult to be a boater without a boat. The solution to this dilemma is OPB (other people’s boats). Many find that a day on a friend’s boat can be far more relaxing than stressing about loan payments, slip fees, fuel, insurance and maintenance on your own vessel. But for those boatless souls not lucky enough to have friends with boats, there is an alternative: boat sharing companies.

This growing industry is divided into two basic forms – fractional ownership and boat clubs – with various hybrids in between. With fractional ownership companies like SailTime and WindPath, groups of members share the cost of a specific vessel, while clubs such as Freedom Boat Club and Carefree Boat Club provide members with access to entire fleets of small boats.

After losing their MacGregor 22 in Hurricane Ike, Gary Delzer and Kay Sandor of Galveston, Texas, visited a boat show last year to see what was available. Resisting the siren call of new boats, the couple instead bought a membership with the NauticShare club operated by the local Hunter dealer. The hybrid club based in Kemah between the popular destinations of Clear Lake and Galveston Bay, guarantees them three days per month aboard a Hunter 36 for just over $400 plus an initial deposit.

“That fee is basically what I’d be paying in slip fees,” says Delzer, who is in his mid 60s. “At my age, I’d never be able to get the use out a boat to make it worthwhile.”

NauticShare offers higher membership levels with six and 14 guaranteed monthly cruises, and any member can enjoy additional free time on the boat if it isn’t already booked within 24 hours. To get started, the couple took an intro boat class (which was a refresher to them) and spent another day getting checked out on the systems for their particular boat. Since then, they have spent many days on the water, as well as nights in the marina enjoying the air conditioned comfort.

“From this marina, it’s five minutes to get into the bay,” Delzer says. “This is perfect for us. I don’t know why anybody would want to own a boat unless they do a lot more boating.”

Chris Piper, membership director of the Freedom Boat Club franchise in nearby Seabrook, says about half their 55 members fall in the category of former boat owners. “They get to do what they enjoy, which is spend time on the water, and we handle all of the work,” Piper says. “Affordability is certainly a factor for members, but I think more important is convenience: showing up at the dock with a clean boat that’s ready to go, then coming back and just dropping off the keys.”

Freedom members pay a $3,200 entry fee and ongoing monthly fees of $299 for access on weekdays or $399 for access all week. The only other cost is fuel. The Seabrook franchise focuses on the powerboat crowd with a fleet of three center-console fishing boats, five bowriders, a Regal 29 cabin cruiser and a wakeboarding boat. “As we get more members, we add new boats to the fleet,” Piper explains. “We try to keep a low ratio of 6-8 members per boat.”

Freedom Boat Club, which pioneered the club concept with its first location in Sarasota, Fla., in 1989, has grown into the largest alternative to boat ownership in the country with 57 franchises along the East Coast as far north as New Hampshire. “Members can use boats at any location,” Piper says. “A lot of our members are retirees who have freedom to travel. Many have family in states where we have clubs, so it’s great for vacations.”

Alternatively, fractional ownership clubs offer members a personal connection with a particular vessel. Usually, one member is the de facto owner while other members pay for the right to use the boat for a percentage of the time. The club manages the vessel, covering all costs while it is in the program, and the owner sails away with it free and clear after a pre-arranged period.

SailTime base owner Kevin Hennessey in Southport, N.C., gave up his job on the New York Stock Exchange six years ago to begin building a fleet. Hennessey has members from around the southeast who use the boats like a timeshare condo. “Some live seven hours away,” he says. “They come down and the boat’s been waxed, the engine work is done, and it’s ready to go. Everyone’s got enough stress in their life. They come into this program and they’re able to get on the boat and not worry about maintenance.”

Memberships are limited to eight per boat, with seven guaranteed uses per month. Those uses operate like rollover minutes – save them up and you can take the boat to sea for week-long excursions. Members also get the benefit of using boats at other SailTime locations around the world after getting checked out for knowledge of the local waters.

Beyond the national companies, independent and smaller groups are forming, offering affordable access to the water during difficult economic times. Many dealers and yacht clubs have boats available for monthly fees. Boating schools are joining the trend. The College of Charleston Sailing Association provides use of their J-22s and dinghies, and Lake Lanier Sailing Academy’s five locations offer unlimited use of their fleets for former students who want to join their club in order to practice newfound skills – without the steep costs of ownership.

Luxury at a Fraction of the Cost

If you’ve always admired classic luxury yachts but couldn’t afford the millions of dollars it costs to own and maintain one, perhaps $50,000 for a five percent share is more in your budget?

Beaufort, NC-based McMillen Yachts Inc. has taken fractional ownership to a whole different level by using the model as a tool for preserving older wooden yachts. Owner Earl McMillen III has overseen the restoration of a fleet of beauties that are now cruising New England in the summers and south Florida to the Bahamas in the winter with Spring and Fall spent in the Carolinas. Prices for a share of ownership vary depending on the boat, which range from Onawa, a 1928 12-metre sailing yacht designed by W. Starling Burgess, to three classic Trumpy motor yachts.

The company uses membership fees to fund complete restorations before entering new vessels in its fleet. The most recent project was Freedom, a 1926 104-foot Mathis-Trumpy fantail motor yacht that launched in 2009. Shares of that beauty cost $400,000 for a 5 percent stake. woodenyachts.com.