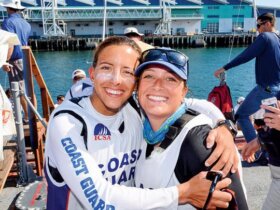 The Peg Legs Round Tortola Race will take place on Saturday, November 21st.  This 36-mile event is in its 40th consecutive year of running and more than ever before bragging rights are on the table.  This will be the second year in a row that the fleet will undertake a complete circumnavigation of Tortola, starting and finishing off Nanny Cay.

Records on the best times are a little sketchy but Triple Jack’s 2002 time of 3 hours and 55 minutes from Road Town to Nanny Cay, and just shy of a complete circumnavigation of Tortola, is the target. Sprightly 30-year old Triple Jack, a Kelsal 47, is expected to compete this year along with last year’s overall winner, Willy T (Olson 30) and fastest boat, Jurakan, a Melges 32.

All classes will start in the Sir Francis Drake Channel off Nanny Cay and then head anti-clockwise around Tortola. After the beat East up the Sir Francis Drake Channel, the fleet will turn the corner at Great Camanoe and head on a downwind run to West End where, after a quick wiggle through Soper’s Hole, it will be a beat back to the finish off Nanny Cay.

The skippers’ meeting will be held at the Royal BVI Yacht Club (RBVIYC) from 6:00 – 8.00 pm at Friday 20th November and sailing instructions will be available at that time.  The RBVIYC will also be hosting an Oyster Night that evening.

Classes will be racing, cruising and multihull with all eligible for the overall prize. The first start will be 9.05 a.m. for the cruising class, following by the racing and multihull classes at 9.35 am. Nanny Cay Marina will be providing free overnight dockage for competing boats based outside Nanny Cay on Saturday night.

The post-race party begins at Peg Legs as soon as competitors finish, followed by the prize giving at 6:00 pm or when results are finalized. Peg Legs will be rocking with live music and drinks specials post-race.  Peg Legs Restaurant is Nanny Cay’s flagship restaurant at the entrance to the marina.

“We’re very pleased to be sponsoring this event and look forward to welcoming the Round Tortola fleet to Nanny Cay after their circumnavigation,” said Nanny Cay’s general manager, Miles Sutherland-Pilch.  “The party will start as soon as the boats hit the finish line.  Hopefully free dockage will encourage the tired crews to stay and enjoy the party and worry about proper boat clean-up the following day!”

Kevin Rowlette steered the Willy T, a black hulled Olson 30 decorated with the skull and crossbones, to victory last year.  Kevin and crew completed the race in 4 hours, 58 minutes and 34 seconds to win the Racing Class and overall on corrected time. The fastest time was recorded by Dave West’s Melges 32 Jurakan in a mere 4 hours, 28 minutes and 2 seconds, but after handicaps were applied Jurakan dropped to third. Peter Haycraft’s Pipe Dream was second overall.

Bill Bailey’s Second Nature romped home at the head of the Cruising Class in 5 hours, 58 minutes and 15 seconds.

The boats faced strong tradewinds and big waves surfing down the north side of the island. An unusual northeasterly breeze made the first leg to Beef Island more tactical than usual, forcing competitors to judge the advantages of flatter water and favourable shifts inshore against bigger breeze further out. Off Scrub Island the fleet encountered big, confused seas with the potential to stop a boat in its tracks if handled wrongly. Following the long run down the north side the next pitfall for the unwary was the narrow, current-filled gap between the West End and Little Thatch, where the light and fickle breeze held up several boats for a long time.

Nanny Cay is located between Road Town and West End on Tortola in the British Virgin Islands. Its fully equipped marina and boat repair facility has berths for 180 motor cruisers and yachts and two boat lifts of 50 and 70 tons capacity. Nanny Cay also includes a 40-room hotel and new waterfront townhouses for purchase and rental, two restaurants, a small supermarket, shops and boutiques, a dive shop, a water sports center, free WiFi service, and a gym and spa.