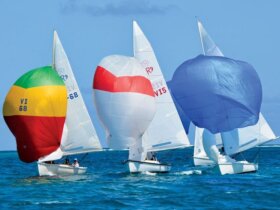 On Wednesday the 11th November the usual Dutch crowd arrives at Princess Juliana International airport from Paris for the annual Golden Rock Regatta. They are accompanied by the first Belgian team to participate in the Island hopping event. The week before saw the German and American Teams arrive for some extra practice time! Some twelve boats from a 54 ft Sun Odyssey to the new Oceanis 43 will make up the Bareboat fleet.

New to the regatta is the inclusion of a multihull class. Patrick Turner has indicated wanting to enter with the trimaran “Tryst” . He will  be joined by an American and a Dutch teams currently forming and looking for crew.

Local interest in the regatta is growing and two entries from St. Kitts have already signed on. Jan vanden Eynde who’s Soca was seen to flash through the Bareboat fleet in past editions of the Golden Rock intends to do a repeat  in “Panic Attack”. Others putting together a crew at the moment are Bobby Velasques and Leo Ligthart.

The event officially kicks off  with a dinner at Chesterfield on the 12th  Nov. though the Bareboaters have had their welcoming party round the Dinghy Dock and Captain Oliver’s the night before.

Racing starts at 9,00 am on the Friday the 13th out of Great Bay heading for Road Harbor on Anguilla with a BBQ and Beach Party at Johnno’s. From here the race returns to St. Martin to Grand Case and on to Statia the next morning at 8,00 am!

On Statia Day the First Salute Races (two up & down races) complete the regatta with a the prize-giving held in Historic Fort Orange. On the 17th the fleet races back to Oyster Pond and the first one there goes home with the Presidente Cup! The prize-giving is followed by a Lobster buffet in Captain Oliver’s Restaurant where the party continues along the waterfront!

Come join in the Fun.