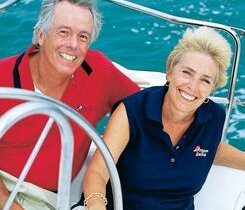 How exciting it was to see Duane Smith receive the
Queen’s Baton on Youth Instructor
at Road
Harbor three weeks after the Shoot-Out.
On our boat, I joined the BVI marine community flotilla to welcome the baton in
its arrival to the BVI in honour of the upcoming
Commonwealth Games in Melbourne,
Australia.
Duane had the pleasure of standing on the bow with the famed baton uplifted
while El Richardson helmed the Tortola Sloop around the harbor before passing
it on to BVI Governor, Tom Macan. The event was sponsored by the BVI Tourist Board, the
Department of Youth Affairs and Sports, the Ministry of Education and Culture,
Scotia Bank and the BVI Olympic Committee. Designed in Australia, the baton,
which thousands of runners will carry around the globe as part of the March
2006 Queen’s Baton Relay, will carry a message from Her Majesty to athletes in
each of the countries competing in the games to be read at the opening
ceremony.

The Commonwealth Games will
feature some 4,500 athletes who will visit
Melbourne, with over 1 million spectators and
a presumed global audience of up to one third of the world’s population. It is the first time that all 71 Commonwealth countries
will participate in the relay, which was introduced at the Cardiff Games in the
United Kingdom
in 1958. The BVI participated in the games for the first time in 1990 in
Auckland, New
Zealand. The baton was being accompanied by
four delegates from Australia
– Brett Kennerly (team leader), Kate Brody (Media),
Will Salter (photographer) and Damian Whitford (asset
protection officer). BVI Olympic Committee Head, Ray O’Neal, stated that
“The BVI will be represented at the 2006 Commonwealth Games and we do
hope that all our athletes, officials and our country can gain from this
experience.” What an afternoon -I know that I enjoyed doing my
part to show enthusiasm for the event.