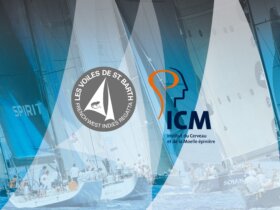 A Spectacle Guaranteed in Battle of the 30-60 Footers

Emma Paull is a young woman on her way to the top in Caribbean
Laser Sailing. Born to avid sailors in Southampton,
UK, Emma
was exposed to the sea early in life when her parents made yacht deliveries
throughout the UK, Europe
and the Mediterranean. “I used to cruise
with my family and holidays were always on the boat.” Her independent sailing began in
’86 at Warsash Sailing Club in Southampton. “Our club had a training program
that met on Saturday mornings.I
gradually moved up in class, from Mirrors and Optimists to Toppers at age 11.
The UK Topper Association runs national events and training which I competed in
for three years before I moved up to the 420s – a two person dinghy with a
trapeze and spinnaker. I sailed in club races, school competitions and in
UK and European
youth circuits. I give my Mum, Jane, a lot of credit for spending 8 years of
getting me to weekend competitions while working six days a week”

Emma competed in
three 420 Ladies Worlds – Plymouth, UK, when she was 16 and then in Fremantle,
Australia two years later where she spent a year traveling and working as an Au
Pair. “When I returned in late ’95, I qualified for the Worlds in
Belgium in
’96 with my crew. We finished 9th and were the highest placed
UK boat. At the age of 19 I took a two-year training in the food retailing chain, Waitrose, which
developed my personal skills. I then took a break from serious sailing and bought
a Laser 4000, which I raced for three years with my boyfriend. When we sold that I bought a Laser EPS, (a
high tech version of a Laser) and did the
UK and European events.”

In 2000 I came to the BVI to work for Conch Charters where I
am a Sales Manager.I joined the
RBVIYC and began racing.I bought a
Laser and started sailing in club races.
In 2000 I won the Virgin Queen Race in Cruising Class. I spent the next
couple of years sailing on big boats after I got a couple of rides in St Marten
and Antigua on friends’ Swans. I sailed with Ron
Noonan on Wildflower,
a Saber 46 and then Bungee & Di Flynn on Delirious, a Dehler 36.”

In 2003 Emma
started racing her Laser in competitions.
In ’03 she finished 3rd in the BVI Dinghy Championships
and 2nd in the St. Martin Ladies Laser Regatta. In ’04 she won 2nd in
the BVI Dinghy Championships and 3rd in the Caribbean Dinghy
Championships. She also won the Caribbean Woman’s Keelboat Regatta in St.
Martin with her team – Linda Phillips, Clair Burke and Rebecca Paull, her
half sister who is the partner of Kevin Rowlett, a noted BVI racer.

She travelled
to the Laser North American Championships in
Seattle, WA,
in June.“I didn’t win
top honours but I
learned a lot, the fun part of the week was a ride on a Transpac
52, it is definitely something I would like to sail on in the future”. This month she will represent the BVI at
the Women’s Laser Radial Worlds in
Brazil and is planning a full 2006 season
starting with the Miami Olympic Classes Regatta in January.