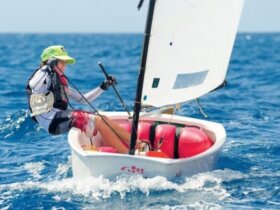 Duff Bags Back to School Regatta

Puerto Rican Hobie 16 sailor Joliam Berrios likes being at the helm. But long-term, she’s opted to crew instead and is making a big splash in the international sailing world doing so.

A native of San Juan, Berrios grew up as did many of the island’s best beach cat sailors. That is, with a family home right on the beach in Isle Verde complete with a constant view of the ocean.

“My first sailing experiences were aboard big boats, cruising boats with my friend’s family,” Berrios says. “We sailed for recreation all the time. It was fun. Later, it was my friend who got me into Hobie sailing.”

“Pedrin Colon’s crew didn’t show up one weekend. We knew each other through mutual friends, so he called to me and said ‘gear up, we’re leaving’ and I said ‘sure!’” she relates.

Right off the bat, Berrios fell in love with Hobie sailing. “I already liked sailboats, but the Hobie goes so fast. That’s what made me fall in love with them.”

Berrios competed in her first regatta in 1999, in Boqueron. “I didn’t do very well. We capsized about 20 times. Still, I wanted to keep sailing and ended up going to the Hobie 16 Nationals with Jose Torres.”

Berrios and Torres had crewed together many times on Torres’ Melges 24, Clubman. The two practiced together for a few weeks on the Hobie and headed to Syracuse, New York, for the championships.

“We didn’t do so well, but the experience and what we learned really sparked my enthusiasm for the sport. There were so many boats, it was so challenging and I met so many dedicated sailors. It was fun to see the boat’s potential and so many good Hobie sailors. At the same time, I knew we had many excellent Hobie sailors in Puerto Rico to practice with and against, so the opportunity to improve was there.”

“I wanted to be a skipper,” she says. “There aren’t many girls in the skipper position. But, being skipper means a lot of time. I didn’t have that time, especially because when I do something I want to do my best. So, when Francisco lost his crew he asked me right away to join him. I set my sights on being the best crew possible. We’ve been together as a team since November 2004.”

Right from the start, the two composed a calendar of top Hobie events around the island, nation and world and attended many of these to gain experience and ranking points. Amid the duo’s many successes came a major disappointment in 2006.

“Our boat broke on the second day of the qualifier for the last CAC (Central American and Caribbean) Games,” Berrios says. “The main traveler went, and nuts and bolts literally flew. We borrowed a boat for the next weekend of the qualifier, but that boat had problems too. It wasn’t our regatta.”

Puerto Rico’s Enrique Figueroa and wife, Carla, did win the qualifier and went on to earn a gold medal at the 2006 CAC Games, held in Cartagena, Columbia.

“We said ‘let’s try again’,” says Berrios. “We got a new boat and set off to gain even more practice and experience.”

Their hard work paid off. The next year, in October 2007, the two achieved a stunning top ten finish at the Hobie 16 World Championships, in the Fuji Islands. Fifty-six teams representing 15 countries attended.

“We were happy to qualify and Francisco researched the venue and its weather extensively, so we felt well prepared,” Berrios said. “We were very relaxed and just tried to stay consistent.”

This spectacular finish in Fiji, along with impressive results at the 2007 Hobie Nationals in California, Madcatter Regatta in New York, Pan Am Trials and Copa Cummins in Mexico, and Pan Am Qualifier, Heineken International, and Olympic Fiesta all in Puerto Rico earned Figueroa and Berrios the outstanding distinction of a 1st place ranking by the Hobie Class Association of North America for 2008. The two outdistanced the second place team in the rankings by nearly five points and topped a total of 401 teams from throughout Canada, the U.S., Mexico, Central America and the Caribbean.

The 2008 sailing season started with a jump in interest for the Hobie 16 in Puerto Rico, says Berrios. “We had eight teams out for our first regatta instead of just four or five. So, the local scene is picking up. This could be due to rumors that Puerto Rico will host the Hobie Worlds in 2009 and the CAC Games will be held in Puerto Rico in 2010.”

When she’s not sailing, Berrios works as a Brand Manager for Heineken. She is the first woman to assume this position for Heineken in Puerto Rico.  “I work hard and a lot,” says Berrios. “But, I have a very supportive boss.”

For other women who’d like to follow in Berrios’ path, she recommends, “Do what you believe in. All the sacrifices are worthwhile. Sports aren’t just for boys. There are especially a lot of crew opportunities in the Hobie 16 because of the weight requirement.”