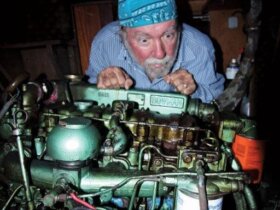 Saint Barth kicked off the New Year’s Eve celebrations with the annual New Year’s Eve Regatta sailed under cloudy skies with occasional squalls and gusty winds. The wet weather did not deter WinWin, a 108ft carbon Baltic that was built in 2014 and celebrated by winning Saint Barth’s New Year’s Eve parade that same year. With just six boats in the race, WinWin had a definite advantage.

Skipper Ryan Taylor brought the boat to its second victory in this race with an around-the-island time of 2h 2m 15s. “The conditions on Saturday, with a little roll and a few bumps, were not too bad with the expected weather. In the Caribbean swell, WinWin powers through the waves.  She handles very well,” says Taylor.

Second, third, and fourth place went to Saint Barth-based boats: Raymond Magras’ 34ft Speedy Nemo; the 36ft Albacore 4 and its female crew; and Mowgli Fox, a 30ft L’île. Fifth was the 76ft W-Class Wild Horses with Donald Tofias at the helm; and finally the 96ft Symmetry, with skipper Ross Kleiman and a crew including Mark del Giudice, who, with Annelisa Gee and members of the Saint Barth Yacht Club, help organize the race each year.

The awards ceremony was held on the dock after the race, with prizes offered by Ets. Ledée, the Port of Gustavia, and the St Barth Yacht Club. Registration fees for the race go to the Saint Barth Yacht Club for its sailing school.

Next up on the Saint Barth racing calendar is The St Barth Bucket, March 16-19, with a great fleet of sailboats over 100ft., including six of the glorious J-Class boats.