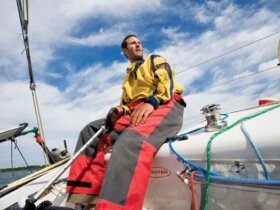 Forty yachts, everything from a Melges 32 to one-design Hunter 216 and IC-24 classes plus Hobie cats and native-built chalanas, competed in the Discover the Caribbean. This longest running regatta in Puerto Rico, hosted by the Ponce Yacht & Fishing Club, changed format and name this year. Instead of a series held over two weekends, the event took place over three days, November 8 to 10.

“It was three days of excellent racing,” says Luis Juarbe, who won the CSA Spinnaker Racing Class aboard his Melges 32, SOCA. “We bought this boat last April, and the learning curve has been outstanding. Our biggest challenge was beating our own time and working towards making faster maneuvers. We hope the class picks up, as it is the perfect race boat for these waters. We have one Melges 32 in the Dominican Republic, one in St. Maarten and hopefully two more in Puerto Rico by next season. Our plan for next season is to sail a couple of the Caribbean events to support our local waters and then send the boat up north for the worlds in 2014.”

Angel Davila, who was the tactician for over 27 years for the Don Q Racing Team, raced aboard his Guango, won the four-boat Hunter 216 class. Joel Santiago, driving his Pura Vida, traded first and second place scores with Guango right up until the third day when Guango won the last two races to win by three points.

“The Hunter 216 class is getting more and more popular every year,” says Davila, whose boat is one of six in Puerto Rico. “The comfort and ease of taking these boats out of the water without having to use cranes is one reason for this. In addition, the boats are economical to maintain and fast on the water.”

The IC-24 class was the largest of the regatta with eight boats. After 14 races, it was Robbie Ramos helming Orion that won by an impressive 12 points with seven bullets.

“We finished the first day in third place behind Cachondo and Por Fin. They were both very quick on the lighter breeze,” Ramos explains. “Although we managed to win the last three races of the regatta, our main focus coming into the last day was to stay ahead and put as many boats as possible between us and Por Fin. There were probably six boats with a chance to win the event. The fleet has become very competitive. The boats are even in speed and boat-handling, so it’s up to who can execute best on the basic stuff … starts, speed, shifts, and staying out of trouble. The other two boats were newcomers to the class.”

Jorge Ramos and crew Christine Bahr aboard Radio Joe proved their prowess by winning the six-boat Hobie 16 class by 12 points.

The ten-class fleet saw a full range of conditions: 5-8 knots the first day, 10-12 knots the second and 15-18 knots the third day. Each class averaged five races per day. There were two areas of competition: inside the bay and out in the Caribbean Sea. The CSA racing classes enjoyed the best of both worlds with windward-leeward and long races out around the offshore island, Caja de Muertos. On land, there was good food, live music and cocktails provided by sponsors Don Q and Medalla.

“Change can be expected for next year,” says regatta director Jan Gonzalez. “If I am the director once again, I will stick with the three day format. Expect bigger things for next year too since we will be celebrating our 25th Discover.”