Wind vs. Solar: Just keep your wind generator for what it is best at—generating noise and vibration and not-much-else.

As a journalist, it is drilled into me to be fair and objective. Also, marine advertisers pay my salary. Inkslinging sailors who offend often don’t sling ink for long. Thus, most sensible journalists who enjoy eating regularly both equivocate and avoid the negative. They use their words to obscure as much as inform.

In essence, they self-censor.

I’m not most journalists.

They’re almost useless except in areas with trade winds.

Then why don’t I deep-six my unit?

Well, that’s tricky. See, I want my wind generator to work—I desperately want it to work.

Being energy independent is very important to me—being ‘off the grid’ is at the very core of who I am as a sea gypsy. I shun marinas. I seek freedom and independence. I can’t be plugged into Big Brother or sucking off the tit of a noisy, hot, expensive infernal combustion gen-set fed by Big Oil.

Besides, the combo of wind and sun makes such cosmic, hippy-dippy, celestial-green sense!

“When there’s no sun for my solar cells,” I smugly tell my visitors, “I crank up the wind generator!”

That’s true. I do. And I love to do it. My wind generator whirls. And roars. It shakes the whole boat. And the numbers are lovely—eight amps, ten amps … wow, I see twelve amps!

The only problem is that it doesn’t charge the battery—not really. Sure, for a moment or two it twitches the amp meter, but, mostly, it dribbles out an insignificant amp or three.

I wish this wasn’t true—but that’s been my offshore experience.

My vessel has refrigeration, SSB, an electric anchor windlass, an electro/hydraulic autopilot, and a radar. I need lots of amps in double digits for long stretches of time—not milliamps for micro-seconds.

And my goal is to never crank my engine to charge my house bank—what a waste of money! What a waste of carbon! The heat! The noise! Yeeck!!!

I’m a sailor because I enjoy Mother Ocean—I’m not here to kill her.

If that depressing information isn’t cruel enough, wind generators are also dangerous to vessel (wrapped halyards) and crew (skippers speared with airborne broken blades travelling at high speed). They are also heavy, very heavy. Since they need to be high up in the breeze, they can adversely affect a vessel’s righting moment.

My 13,000-pound Hughes 38 Wild Card used to roll before I mounted the wind generator—then it lurched sickeningly.

It’s not the weight that makes it dangerous, it is the placement of that weight up high.

Needless to say, water powered generators don’t have this ‘weight aloft’ factor—but are highly undependable with their submerged motors and exposed plastic props.

Another consideration: solar cells are dramatically falling in price—while at the same time wind and water units are skyrocketing in price.

One wind unit with small blades advertises accurately that it is whisper quiet. This is true—it barely makes a sound while putting almost nothing in your battery.

Wind generators have moving parts and all experienced sailors know that moving parts require regular attention or they don’t move for long.

Since all marine wind generators that I know of, have ferrous metal bearings spinning in a saltwater environment—they all require regular mechanical maintenance. And, let’s face it—replacing the bearings are often beyond the skill set of many non-techie cruisers today.

My wind generator is currently mounted on my mizzen mast. This turns my aft cabin into a sound box that makes a horrible, teeth-hurting racket even when switched off and slowly rotating. Flip it on, and it sounds like a jet crash-landing on my aft deck!

And this isn’t even mentioning the blade-tip noise it inflicts on other unfortunate inhabitants in the harbor.

Mounting a wind generator on the mizzen has many advantages. However, it is horrible if the vessel is rolling downwind in moderate to light airs because the mizzen mast blocks/unblocks the wildly gyrating blades.

Alas, running downwind in light to moderate airs is exactly what I spend most of my life doing.

So here is the sad reality: my wind generator produces almost nothing in light airs. Ditto, in heavy airs. (I don’t know a marine unit that is effective in 30+ knots.)

When it is effective? Almost never, in my case.

Or, to put it another way: in steady trade winds of 16 to 24 knots—except if you’re running dead downwind, which is exactly what I try to do.

Once upon a time, when my ‘hood’ was solely the Caribbean, my wind generator paid for itself at anchor in the trades and while beam-reaching up and down the Lesser Antilles. But in the Pacific, Indonesia, or Asia—forget it. 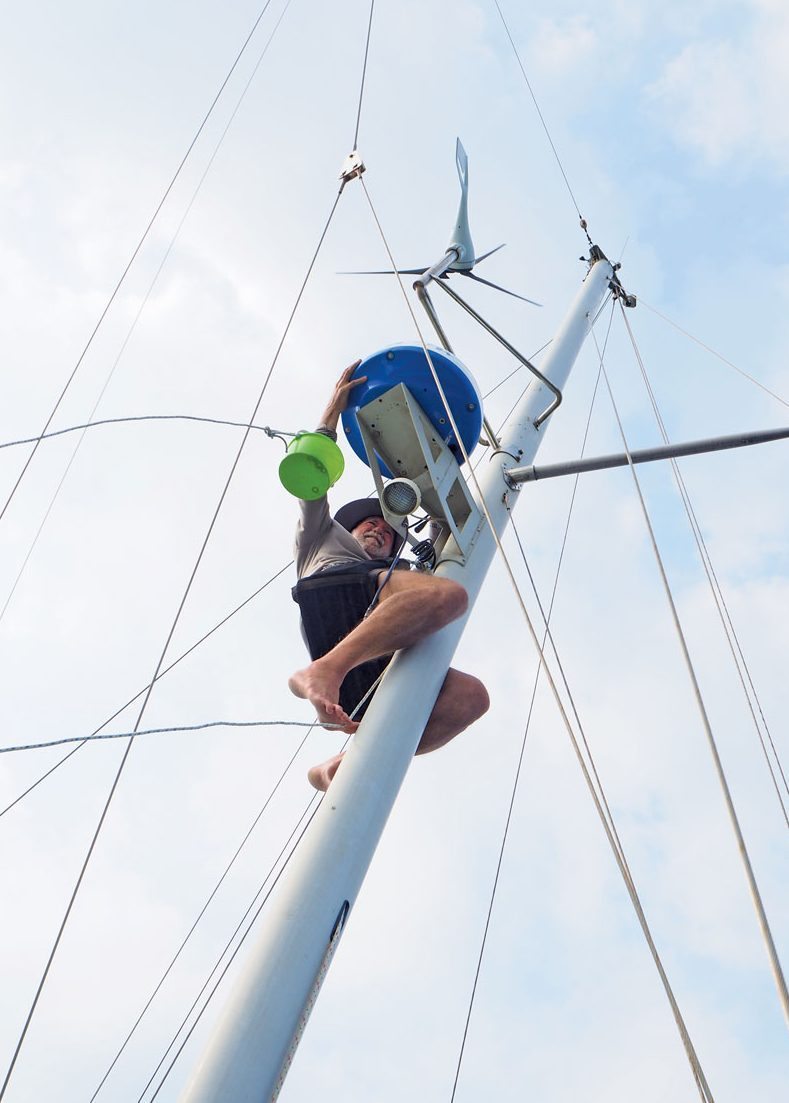 Thus, 98% of my power comes from solar energy—and the remaining one or two percent from the wind (if I’m lucky).

The good news—solar panels are getting cheaper, thinner, and lighter. They are silent. In the tropics, they are generally effective for ten hours a day if properly installed. Mine give 30+ amps an hour for many hours every day.

The bottom line—Wind vs. Solar—do not spend one penny on a wind generator until your vessel is totally maxed out on solar.

I currently have seven large panels on my 43-foot Ganesh—only one of which is normally shadowed by my useless wind generator.

Yes, if you run your engine a lot, get a high performance 150-amp Balmar alternator with a smart regulator and a battery temperature sensor.

And, sure, if you have money to burn, buy a quiver of water-immersed transom-towed generators—they are utter magic until the first drop of salt sneaks through the seal.

Just keep your wind generator for what it is best at—generating noise and vibration and not-much-else.

Editor’s note: Fatty is currently anchored off Johor Bahru, Malaysia—wondering if the bearings on his wind generator froze an ocean or two ago.

Cap’n Fatty Goodlander and his wife Carolyn are currently on their third circumnavigation. Fatty is the author of Chasing the Horizon and numerous other marine books. His latest, Storm Proofing your Boat, Gear, and Crew, is out now. Visit: fattygoodlander.com