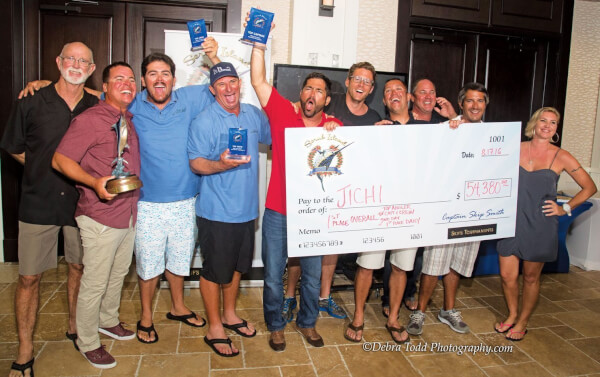 There was fifteen minutes left in the tournament before lines out when we hooked up a blue and released it. That gave us our eighth fish total, more than any other boat, and first place in the tournament…

The right place at the right time. That’s how Capt. Gene Lebron describes the secret to success for the team aboard the 68ft Paul Mann, Jichi. The Florida-based team bested 13 other boats to win the first annual Scrub Island Invitational, held August 15 to 17, out of the Scrub Island Resort & Marina in the British Virgin Islands.

The Jichi team didn’t start out in the lead. That honor went to BVI/Colorado resident Curt Richardson, aboard his 47ft Jarrett Bay, Grander, who released three blue marlin the first day. Jichi meanwhile caught one while angling on the drop-off northeast of Anegada.

“The second day was much better,” says Lebron.

“We saw 12 fish. Two didn’t eat, we had ten bites and caught and released six. Of the four we didn’t get, one straightened the hook out during the fight, there was a malfunction of the swivel on another, one over shot and one we missed. It was still an incredible day.”

Jichi led the charge going into the third and final day of competition with seven releases total. At first it seemed like the team’s hot streak had cooled. Right off the bat, Jichi’s angers missed two bites and another blue marlin that failed to eat the bait. Then, they caught a white marlin, which didn’t count for tournament points. Meanwhile, anglers aboard fellow competing boat, Predator, a 52ft Viking with Capt. Juan Carlos Torruellas at the helm, caught four blue marlin, while those aboard Hit N Run, Prime Time and Marlin Darlin released three blue marlin each to really close in on Jichi’s lead.

“There was fifteen minutes left in the tournament before lines out when we hooked up a blue and released it. That gave us our eighth fish total, more than any other boat, and first place in the tournament,” says Lebron.

In other awards, Hit N Run, a 68ft F&S with Capt. Dave Field at the helm, finished second and Predator third in boat standings, both with seven blue marlin releases. Among the anglers, Grander’s Richardson ended second with five releases and Roy Merritt, aboard Never Say Never, a 58-footer built in Merritt’s boatyard, came in third. Top Lady Angler went to Lisa Evans aboard the 52ft Viking, Prime Time, with four blue marlin.

In total, the 14-boat fleet with 66 anglers released a total 64 blue marlin, a billfish per team average of a whopping 4.57.

“We had many requests for a Custom Shootout-like tournament from owners and captains that fish in the U.S. and British Virgin Islands. So we responded with a blue marlin tournament that took place in the run up to the August full moon at the gorgeous Scrub Island Resort & Marina,” says tournament director, Capt. Skip Smith, who runs tournaments throughout the year in Florida and the Bahamas.

The Scrub Island Invitational is one of two new blue marlin tournaments held in the BVI this year. The BVI Sport Fishing Association, in partnership with IGY’s Virgin Gorda Yacht Harbour, hosted its first annual Virgin Gorda International Marlin Tournament from August 21 to 23.