Why Do People Live on Land 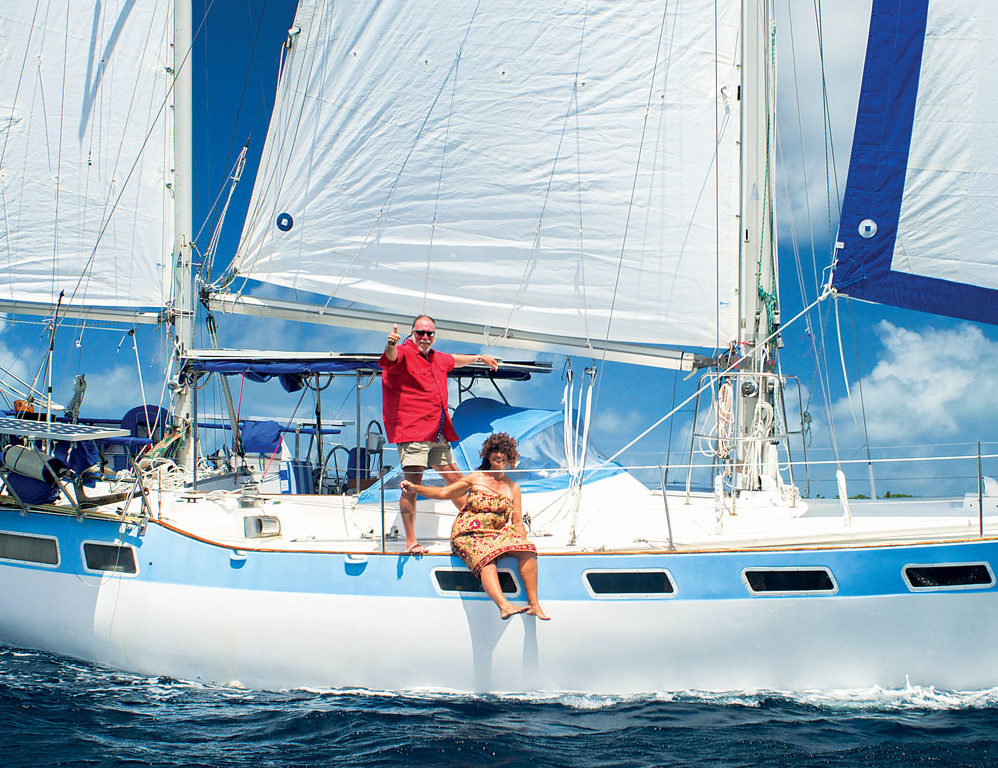 While the exact numbers are difficult to come by-often the victims are ashamed to publicly acknowledge their hard circumstance-many people live ashore.

They actually wallow-in-the-dirt-surrounded by bugs and worms and snakes-as if there was no realistic choice. Why? Low self-esteem? Lack of nautical education? Failure of the US government to properly subsidize yacht ownership? Or is it a genetic issue-that some water-averse citizens just don’t have their aquatic genes stitched on?

“The answer isn’t easy,” she admitted. “There’s a diversity of factors. For example: most citizens in the US are born in land-based maternity wards. In Sweden, where they have a number of floating ‘sailor birthing centers,’ the sailor-to-lubber ratio is much better. A growing number of behavioral scientists feel that ‘live-aboard’ maternity centers are ‘imprinting’ their future sailors in a very beneficial, salt-water way.”

Other government officials aren’t so sure. “A lot of these ‘trendy’ studies don’t bear up under close scientific analysis,” said Lieutenant Detective Charles Whynner of the LAPD’s marine patrol. “They simply don’t want to acknowledge the true facts. Instead, they want to coddle the dirt-dwellers-blame the deteriorating situation on anything but themselves. The fact of the matter is, most violent crime is committed ashore. This is an inescapable, irrefutable fact.

Recovering a Stolen Yacht in the Amazon

“While the government and the media might conspire to pretend that Somalia pirates are responsible for all the crime in Newark, New Jersey, they are not. We’ve identified the criminals. They are land-based. They live in houses, condos and apartments. We know where they are, where they live. So it isn’t that we lack specific information and criminal intelligence concerning their shadowy whereabouts. We could go in there tomorrow and arrest them all. But, again, we don’t. Why? Because we lack the political will.”

Betty Pelter, an organizer of the National Association for the Advancement of Dock Watchers (NAADW), sees the problem through a different lens. “Law enforce ashore is basically broken,” she says. “We know that. This is why concerned boaters around the world have taken to patrolling their local coastlines-and attempting to push the criminals back inland as far as possible.

“Sure, we’ve had some well-publicized successes-but our job isn’t done until we’ve locked up every single land-based criminal. We’re at war-and war is an ugly, dirty business. It is that simple. We have to win-or give up on the American Yachting Dream. Now, if we’re successful … when this happens, will there be a few people living ashore who aren’t criminals, drug addicts and/or sexual deviations? Perhaps. Perhaps not. But let us allow science to tell us that-not prejudice, which pre-supposes innocence when we all know the vast majority ashore are guilty as sin!”

“I disagree,” says Mildred ‘Stormy’ Gale, a Pacific ocean-based biological anthropologist. “What is clear and quantifiable is that women are more likely than men to suffer from shore-boundness-and this isn’t their fault. It’s biology. ‘Biology is destiny’ isn’t merely a slogan, it is the literal truth. Mature women bleed. Regularly. We know that. Sharks are misogynists, we know that too. So it is only logical that the ‘fairer sex’ is more water-adverse. And, as Darwin correctly points out, more sharks have eaten more sailing women than, say, farming women-so their water-genes haven’t had as much opportunity to reproduce.

“Thus, the surviving land-huggers tend to breed more land-huggers-and the cycle of poverty and crime continues unabated. And even worse-certain types of men callously attempt to delude their long-suffering partners into thinking this isn’t happening. They say about sharks, “Oh, they are man-eaters,” when all the male-dominated statistics point in exactly the opposite direction. It is time that women rose up against such obviously self-serving chauvinistic crap!”

This touches a raw chord for many: reproductive biology masquerading as classism.

“You don’t think I’ve love to reproduce with a yachtie and have his sailorboy?” asked a frustrated female dirt-dweller who requested her name not be used. “Of course I would. I’d jump at the chance of getting jumped. But there’s no opportunity. The few marinas which aren’t offshore are heavily guarded. If you don’t have a suntan or sailor’s tattoo or Topsiders … it is hopeless. That leaves the rhum shops-where most of the guys wearing yachting caps are actually farmers from the Midwest. I mean, a Jimmy-Buffett-album-doth-not-a-sailor make!

“It’s horrible. I’ve tried. I’ve even memorized some nautical sayings to blend in, you know, ‘Red sky at night, sailor’s delight. Red sky in morning, sailor take warning!’ but to no avail. Once, a sailor threw me down on the ground and-I thought I’d lucked out-and then he asked me which side of the boat the boom was on during a starboard tack … damn it, I didn’t know enough at the time to shout ‘Port!’!”

There’s no question that such ‘inter-habitat’ mating takes place-but few will go on record acknowledging it. But the internet is filled with chat rooms in which sexually-brash boaters boast of such brazen shore exploits.

“Occasionally, I take my dinghy along the coast and troll for land-babes,” tweeted one sailor who called himself Randy Tarr. “It’s easy. I wear a Mount Gay hat, wave a Greenie and have pink sunblock smeared on my face-and they know I’m the real deal. Many of them want to go ‘back to the ship, sailor!’ but I prefer the safer choice of hiding under a fishing pier or nearby dock to plant the seed. But it is not all fun and games. Occasionally I’ll be coastal sailing and see naked, starving children playing in the mud puddles of Dirtville and then think sadly to myself, ‘ … could that be one of yours?'”

Members of the BBBB (Better Boating Business Bureau) are quick to point out the criminal implications of such ‘shore visits’ which have had a well-deserved unsavory reputation since time immemorial.

“Don’t forget that it was called the ‘House’ of the Rising Sun, not the ‘boat’ of the rising sun,” said Bobby B. Baker, president of the BBBB. “I don’t want to beat a dead horse, but it was never a boat of ill-repute-always a house, which presupposed dirt somewhere … not pure, blessed water.”

The geologists tend to see the Big Picture-at least they believe they do. “The fact of the matter is, if God hadn’t intended for us humans to live at sea he wouldn’t have made so much of it. Sure, land is nice to use as a garbage dump or a veggie farm-and for sport hunting-but basically it is a very foreign, very hard and very unforgiving environment for most people. Water is soft. You can drink it. The human body is made up primarily of water-not dirt! If we were meant to live in dirt, why, we’d be dirt!”

It is hard to argue with such logic.

“Education is the key,” noted Professor Nora Nurdy, of Harvard University, formerly of New England and now located in the Pacific Ocean just north of Tahiti. “Let’s face it-it is ignorance which keeps people bound to the shore. The ocean and its many ‘loosey-goosey’ freedoms scare people. Not everyone is ready to be a citizen of the world. While living aboard might be considered the next evolutionary step to the educated, some backward people cling to the ‘odors of the garbage dump,’ as poet Ralph Newcoumb refers to the familiar stench of Terra Firma.”

Even the Vatican is slowly changing its hard-line position on Aquatic Divinity. “The Bible clearly states that Jesus was a fisherman,” noted a recent papal decree emailed from an ISP in Rome. “And this has been confirmed down through the centuries in motion picture films, books, rap songs, etc. Example: Leonard Cohen’s classic folk/rock tune, ‘Susanne.’ And now recent linguistic research has solved another long-standing Biblical mystery: the Holy Ghost was a ‘pen name’ for Mother Ocean, according to religious scholars.

Members of the fast-going Atlantis sect vehemently disagree. “Mother Ocean as the one true God, period,” they say. “What’s-his-name was, at best, a deck hand.”

Of course, there are some ‘mixed’ people (often disparagingly referred to as guppies) who straddle both camps. “I spend half my life yachting and the other half ashore,” admits one such bi-guy. “And I don’t think it is useful to demonize rock-sniffers. They are human beings too. Some can’t swim. Others get ear infections easily. A few are dyslectic-and thus can’t read the sail numbers. There’s lot of reasons why legitimate people might be forced into the ‘low life’ of shore despite their inclination to do the right thing.”

Perhaps we need to celebrate our diversity rather than kill each other over our habitat choices. Many ‘freshies’ (live-aboards in freshwater lakes such as Michigan and Erie) feel discriminated against as second class sailors. “I went to a boat show in the Indian Ocean and was treated like I was a Manhattan sewer-pipe dweller,” complained one lake sailor. “I say a boater is a boater-once we go down the ‘ketch or sloop-rigged’ route, we’re all doomed by slight individual variations. Together we stand, divided we fall!”

The Lofty Goal is, of course, mutual respect. Many landlubbers don’t even know they have a distinctive odor. Once they are made aware of it and have it explained in a non-judgmental way-they can start to add salt to their shower water and within a few short months-smell perfectly normal.

How to Do The VHF Radio Distress Call

Dirt-dwellers make contributions to the global good too. They have worth-who else would man the recycle centers? Perhaps someday they won’t just be tolerated-but respected for their rugged living arrangements. This is the beginning of a new year and a new decade. Let’s celebrate our residential diversity. Affirmative action programs are now in place to give poverty-stricken landsmen the chance to learn basic seamanship skills aboard Optimist prams. Many farmers are learning to swim. Let’s all hope for the day when ‘home owner’ isn’t a derogatory term nor ‘sailor’ a preferential one.

Dressing Down While Cruising

Circumnavigators Cap’n Fatty and his wife Carolyn regularly have young international lubbers aboard their 38 foot Wild Card-in hopes of giving them a brighter future. Fatty is the author of “Chasing the Horizon” by American Paradise Publishing, “Seadogs, Clowns and Gypsies,” “The Collected Fat” and his newest, “All at Sea Yarns.” For more Fat-flashes, see fattygoodlander.com.