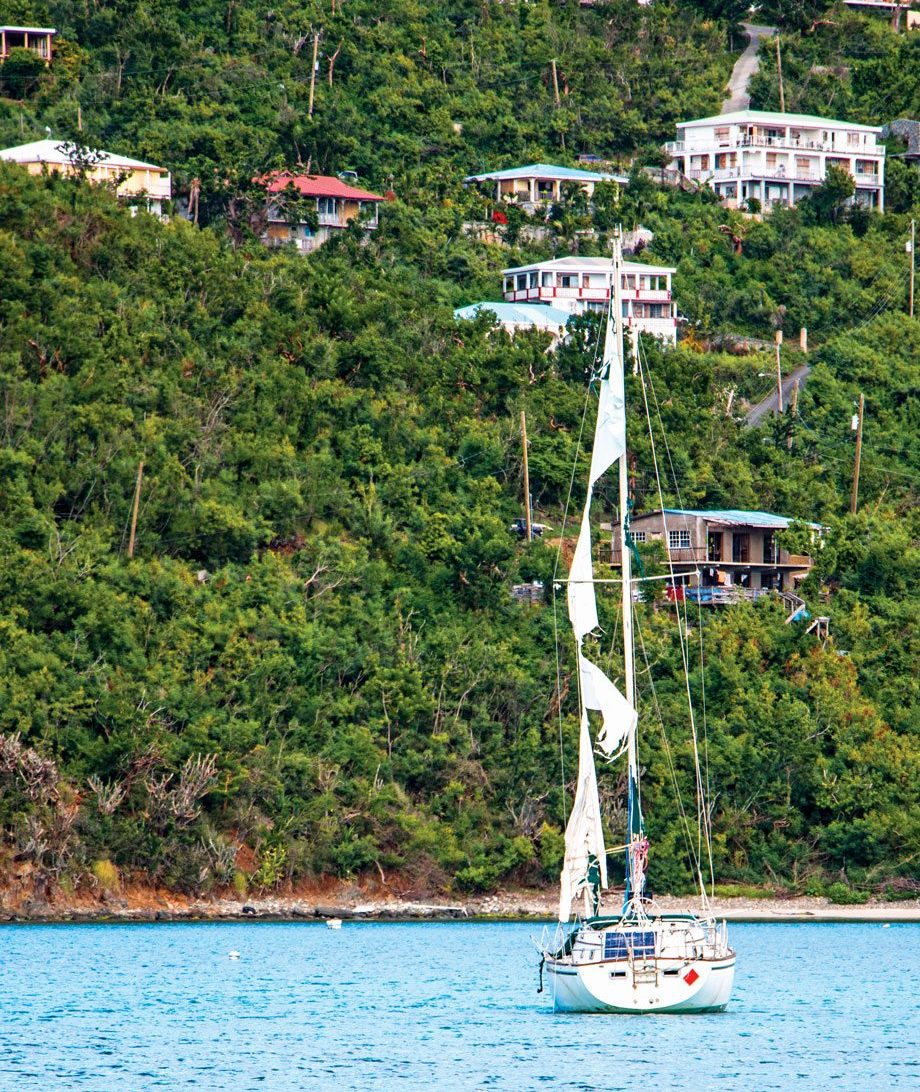 Often different parts of a diverse community don’t understand each other. These fault lines might be along ethnic, religious, or racial lines—and my life-long religion is boats. I love boats, love boaters, and love to sail—especially in the Caribbean. Many dirt dwellers don’t understand my passion (nor enjoy being called dirt dwellers) and thus, for them, ‘boater’ has a negative connotation.

Another problem is linguistic: what is a boater? I’ve lived aboard for 58 years—does that make me a boater? Or the fact that I’ve sailed hundreds of thousands of ocean miles? Or circumnavigated? Or that my vessel is worth more than, say, $50,000?

Does having a yacht club membership help? What about racing—should racers have an easier time establishing themselves as boaters because racers tend to be: 1) smarter, 2) more aggressive, 3) wealthier, 4) spend lavishly, and 5) drink more?

Why Do People Live on Land 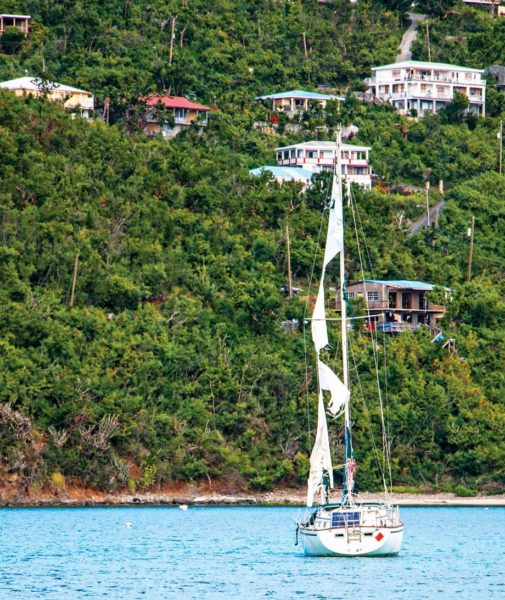 Who is the real boater—the sailor who faithfully registers his craft, pays his mooring fees and taxes—or the one who proudly refuses to?

These are legitimate, reasonable questions—and if the marine community doesn’t attempt to answer them and explain its collective position—it will have to abide by someone else’s decision, perhaps a local politician who knows nothing of our lifestyle.

Where am I coming from? I am a boater who is also a grandfather and I want my grandchildren to have the same opportunities, rights, and privileges as a boater that I currently enjoy. That makes sense, right? I mean, I don’t want to behave in such a manner that the shore community says, “Let’s outlaw that fat jerk!” and bans boating from their waters forever just because I got drunk and rudely cursed out the waterfront from my dinghy.

Yesterday, I and a bunch of boaters were bitching about certain boaters and what dirt bags they were. It dawned on me that if this table was pissed at the marine community, then how does the average West Indian feel when he looks out of his window and still, four months after hurricanes Irma and Maria, cannot see his beach through all the marine litter?

I am currently anchored in Great Cruz, St. John, USVI. There is a boat here that was totally unprepared for a hurricane—the owner didn’t even come and reduce its windage. The owner did nothing that I can see to prepare for the storm(s)—evidently he was too busy to be bothered. Of course, the moment the storm started to build, the vessel’s roller furling jib started to shred (they all do around 100 knots, this is an extremely predictable event) and the boat broke away from its mooring.

Not good. However, at this point, I still have some small sympathy for the guy. Perhaps he is a new owner and doesn’t understand about hurricanes and didn’t know you should take down your roller furling headsail because, if you don’t, you are blatantly negligent—in the humble opinion of all experienced riggers and most of the marine community as well.

Now, if this vessel just destroyed itself and cost its negligent owner mega bucks—fine. But it didn’t. It damaged other vessels—perhaps even destroyed a few—as it went ashore. And, frankly, it didn’t help the ecology of the shore—nor the fancy resort’s appearance that it was driven up into.

So there it was the following day—with its genoa half shredded and flapping noisily—surrounded by photographers clicking away.

No one came down to remove the sail. Evidently, they were still too busy. But a half-shredded sail has a huge amount of windage and makes a huge amount of noise—but, hey, West Indians are easy-going folks, right? And the resort didn’t want to touch someone’s property and open themselves up to a lawsuit or bad PR from a marine journalist such as myself—so the sail flapped and flapped and flapped. And not just for the day or the week or the month—four plus months later the sail is still loudly flapping in the brisk Trades.

Wait. It gets worse. A Federally-funded huge crane with three or four support craft and 12 trained crew comes by—and, at taxpayers’ expense—plucks that boat off the beach and re-launched it.

How many times should a derelict vessel be plucked off the beach at taxpayer expensive: six times? A dozen? More?

Alas, they did not remove the huge amount of extra windage that the half-open sail represents—and now the boat is back on a mooring and continuing to endanger all the other craft in the harbor.

Here’s the question: is this a good or a bad thing? How long should a boat be able to annoy and endanger an entire harbor and its shoreside residents—does six months sound right? A year? Or would a shorter time span be preferable?

Let’s take a look at another young couple in a different bay. They come down to dese islands, mon—and claim they are looking for a job. There is a derelict vessel in the harbor owned by an old hippy who moved ashore—and he rents them this derelict craft. And the young couple move aboard—and begin to party. My, this is fun! So they drink and take drugs and get into many fights—but they don’t pay their rent, boat registration, nor mooring fee. And the owner comes down and demands his rent—so the stoned male tells the hippy boat owner that he will burn his house down, simple as that. The hippy boat owner believes him—probably rightly so. Now, these party-hearty folks aren’t exactly good neighbors and they get into a lot of drunken brawls with other boaters—who keep fleeing the drug-fueled craziness. But one boater just watches and refuses to leave, and so they cut his boat loose—just for fun, in broad daylight. And, yeah, at this point everyone is kinda scared of these folks. They threaten people and they cut their boats loose and then openly brag about it—and, yes, there’s gunplay involved as well. They are firing off guns, drinking, and have a fine ole time of it. Then, on one particularly fun night, she slits his throat. The irony is that they now have no nearby liveaboard neighbors to help—and the guy is in the water bleeding out and screaming … until one of the further vessels with a skipper who is perhaps a bit too compassionate arrives—and he fishes the dying guy out, brings him to the hospital, and the guy survives—to resume hassling the entire harbor again.

These people are loco-crazy, by any measure. But they have seized control (stolen without removing?) of a vessel-which-isn’t-really-a-vessel-it’s-a-crash-pad-for-dirt-bags and that impacts everyone in the harbor and hundreds of homes ashore. And still, these guys party on.

Irma and Maria blow into town—and, of course, the boat is splattered along a wide area of the shore. They strap huge knives on their legs—just in case any of the evil locals tries to mess with them. Then they wander into FEMA and begin threatening people—half of whom got so scared they hid behind their desks but the other half said, “Oh, my God! Look at these people! They have PTSD! The stress of the storm has driven them bonkers! What do they need? Money? A boat? A house?”

Both of these examples are, admittedly, unusual. But it has been widely reported in the national media that 63,000 vessels were sunk and destroyed by hurricanes in 2017. Is it really in the best interests of the Caribbean marine community—let alone the community ashore—for thousands of these craft to end up as floating ‘squatters’ to be re-driven ashore at public cost during the very next storm?

If we don’t regulate ourselves, someone else will. Once upon a time we had marine trade groups in the Virgins such as VIMI (VI Marine Industries) and the VICL (VI Charteryacht League) that carried some weight with the boaters, local citizens, and their mutual government. We no longer do.

Should we be rationally discussing this—or clamming up and pretending the situation does not exist?

Cap’n Fatty Goodlander and his wife Carolyn are about to leave on their forth circumnavigation. Fatty is the author of  numerous marine books. His latest, Storm Proofing your Boat, Gear, and Crew, is out now. Visit: fattygoodlander.com