An often misused term, scope is the ratio of the length of the rode to the water depth below the bow.

A quick mental exercise is all that is needed to realize that a scope of 7:1 causes the anchor rode to pull the anchor horizontally, while a scope of 1:1 is only proper when vertical pull is necessary to weigh anchor.

Anchor designs include patented tried and true models, look-a-likes and less expensive knock offs. And as with life, the same holds true with anchors, you get what you pay for.

Best Anchor for Mud of the Chesapeake Bay?

When lowered into the water, this style of anchor lays flat against the seabed with its wide metal plate flukes. To set a lightweight anchor, horizontal pull on the anchor rode digs the flukes in at an acute angle to grip the sea bottom.

Less than five months before the attack on Pearl Harbor, a patent was granted to an American inventor, Richard Danforth, for an anchor with twin pivoting flukes. During World War II, the U.S. Navy used this anchor to kedge off the landing craft from the enemy beachheads after the soldiers stormed ashore. Once the war was over, Danforth modified his steel design to be lighter in weight and suitable for the growing recreational boating market of the 1950s.

An aluminum version of the Danforth style anchor with adjustable flukes is the market niche for the Fortress anchor that was developed in 1986. Like a traditional Danforth, it folds flat, but it also has the additional feature of being able to be disassembled for ease of storage. The Fortress also has a lifetime warranty on its component parts.

Think of a moldboard horse-drawn walking plow, as seen on the old television show ‘Little House on the Prairie’, and the concept of this style of anchor becomes immediately clear. Depending on its design, plow anchors may bury themselves on their side or with their plowshare fluke upright.

The first plow anchor was invented in 1933 by a British mathematician, named Geoffrey Taylor. Depending on which apocryphal tale one believes, CQR stands for either ‘secure’ (Say CQR’ three times fast) or coastal quick release’. The unique feature of the CQR plow is that it is composed of two pieces, the shank and the fluke. Where they meet is an articulated joint, which is designed to pivot the anchor so it sits more upright when the fluke is digging in. However, many times it just buries on its side particularly with harder bottoms.

A one-piece plow anchor, that eliminated the swivel hinge between the shank and the fluke, is the hallmark of the Delta anchor, another British design developed during the 1980s.

New Zealand sailor Peter Smith began marketing his invention in 2004. The Rocna anchor has a concave fluke shape, a chisel tip and a roll bar to help set the anchor upright. Rocna now manufactures the Vulcan anchor that does not have a roll bar. It is more suitable for bowsprits on powerboats and has excellent holding power.

Cup the fingers of one hand together and dig your hand in the wet sand at the surf line on a beach and pull back on your arm. You have just demonstrated how a claw anchor works.

Initially developed to anchor the four corners of floating oilrigs in the North Sea, Peter Bruce’s claw design found great interest among boaters in the early 1970s. Its ‘three-fingered’ fluke has the ability to reset itself quickly when the direction of pull is changed through very wide angles. This is an important feature when winds or current dramatically alter direction. Bruce stopped producing this anchor for the small boat market in 2007 to concentrate on the commercial applications. Now, a claw anchor similar to the Bruce is marketed by Lewmar.

Whatever your choice of anchor, a properly sized bow roller is essential for both quick deployment and secure stowage underway. Be aware that some of the original manufacturers no longer fabricate their patented designs due to patent expiration. These lapsed patents are then picked up by other manufacturers, which means there may be slight design changes, quality of metal used, as well as different casting and forging techniques that may cause the newer anchors to underperform when seeking a secure night on the hook. 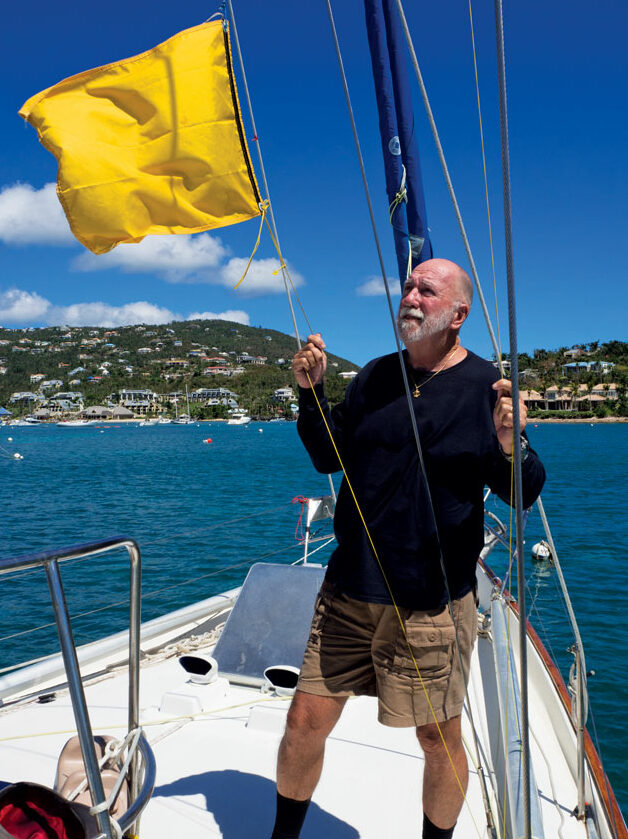