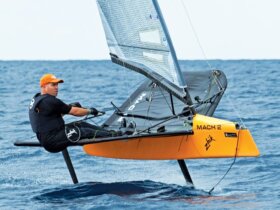 May 21, 2008 saw the culmination of six years of patient work by Steve Davies in the restoration of a little craft found abandoned in the weeds on Peter Island.

Visiting Little Harbour, Peter Island, Steve noticed the remains of a Bequia sloop almost hidden on shore. Steve, no stranger to unusual boats—as he owns the well known trimaran Triple Jack, wondered who had (dis-)owned her. Making some inquires of his local friends he tracked down Paul Westlake who gave him her origins.  Paul had been mate on the square rigger Galaxy plying the islands for hire. On a charter to Bequia for a movie company, the Bequians donated a beautiful little sloop to be used as a traditional tender for Galaxy. Her name was Wendy!

Eventually Galaxy was sold by her owner Adrian Fieldhouse, but somehow Wendy was not part of the deal and so she was “stored” on Peter Island. Adrian moved on. Determined to not let her die, Steve contacted Adrian and asked him for a price. Adrian’s gracious answer was she was priceless—and if Steve wanted to do anything to restore her, he could have her for nothing.

In the tradition of sloop rebuilds, anything goes that will retain the shape and thus the original boat lives on. Steve stripped the boards and side decks leaving the gunnels and the frames. All of the frames were rotten and unrecoverable but the shape of each was there. So one by one, Steve replaced each frame using the original as a template and then re-planked and re-decked her. He had removed the lower part of the keel, so a new approach was needed.

On a trip to Anegada Steve found a wrecked mini Trans-At with both carbon fiber keel fins intact.  Here was a solution to provide both a rudder and a center board for the sloop. He also used part of the rudder housing to build a center board casing into Wendy. Lacking bamboo for the spars, some windsurfer masts were adapted for sprit and boom.

And so, three days before the Foxy’s Annual Wooden Boat Regatta, Wendy was re-christened and launched in Cane Garden Bay. Steve’s research of the rig details paid off as, with the help of Paul’s memory of his time with Galaxy, the rig was pieced together—from mainsheet to snotter.

It all worked and Wendy sailed around Cane Garden Bay in a brisk 10 knot breeze as if she had never been away from the water. She went on to take a fourth place in the Wooden Boat single hander race and win her class in the Foxy’s Wooden Boat race.  Thanks, Steve, for adding another wooden boat to the BVI.

If anyone knows more of Wendy’s history, Steve would like to hear from them by e-mail at [email protected]. You can find Steve on Sundays and Fridays playing his guitar and making good music at Elms Beach Bar – Cane Garden Bay Tel No. 284 494-2888. Try the Sunday BBQ.