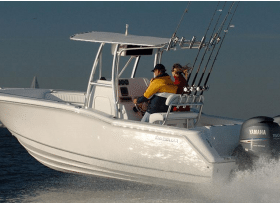 In all,
28 blue marlin and 7 sailfish were released with the largest sailfish weighed
being 46.25lbs by Francis Watt of Brave
Heart. Leon Philis on Tim Manzell had the largest Blue Marlin,
weighing 446.25lbs.

The
four-day tournament began on Wednesday November 8 and anglers fished Thursday
and Saturday with Friday as a lay day. However, when it wasn’t rough, it
was usually raining, apart from the final Saturday—according to
St Lucia’s
Game Fishing Association’s driving force, Annie Hamu.

“The rain was torrential,” said a damp Annie, who ran fish
control from game fishing boats. Flying bridge, she might have been sodden but
her spirits I’m told, were never dampened!</p