We Built a Race Boat! 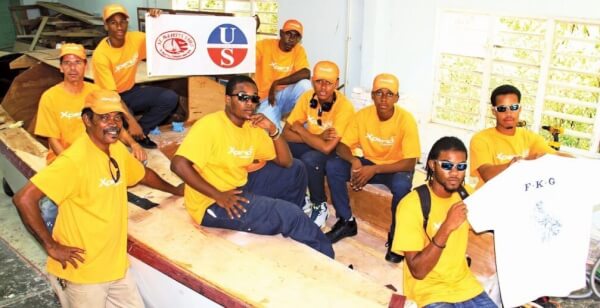 Students at Milton Peters College (MPC) in Sint Maarten have built a boat which they will race in the Heineken Regatta. The boat, a Didi 26 designed by Dudley Dix, was constructed in the school’s carpentry department by an enthusiastic group of youngsters under the guidance of several tutors. The students have built smaller boats before but nothing on this scale … a fully-fledged racing machine.

School teacher Rens Heestermans said he took the initiative to build the big boat. I asked him how important the project was to the students and the school.

“The project is very important because you only read about students in the newspapers when they commit a crime. Now, you read about them in a positive way and I think that’s the biggest plus from this project.”

Gershwin Busby, 17, is one of the builders. He says his friends never expected someone like him to build a boat and that the experience will stand him in good stead if he decides to continue with his education or when he enters the job market.

The Didi 26 is built of plywood. It has a radial chine hull and a vertical drop-keel with a 400kg lead bulb on the end of a high-aspect foil. The boat displaces 3306lb (1500kg) and carries a fractional rig.

Garth Steyn of the St. Maarten Kidz at Sea/Build Your Future program brought the project to the school. For Steyn, encouraging students to construct a race boat is another step in getting teenagers interested in sailing with a view to starting a career in the marine industry.

“The kids building the boat are still in awe over finishing this mammoth project,” said Steyn. “What they did is amazing. They worked hard and the mentors/teachers were a great driving force.”

Steyn said he was surprised that involving the youth in the marine industry through the Kidz at Sea/Build Your Future project had come so far in so few years.

Frank Elstak is a teacher/facilitator at the school’s building department. Elstak says he was surprised that the project was offered to them because although they had built two smaller boats, known as Skerries, they had never built a boat of this size before.

“The idea came from Garth Steyn. We first started with two simple projects (Skerries) and it went well. We have a very good crew, the fourth form; they are a very good team. They work together and they work hard,” Elstak said.

Asked if they were ready to build another boat, he said they were excited and didn’t think this would be their last project. “The third formers, the younger ones, they also do practical work. They see what has been done and I’m convinced  that in the third form we have guys who would want to get involved with another project like this.”

Seventeen year old Mike Edwards says he was surprised at the amount of attention the boat has received and described how government ministers now visit the school to see it. Edwards is photographing the different stages of construction and showing them to his father who, he says, is delighted to see what he has achieved.

Not every stage of construction has gone smoothly, which is to be expected when the builders are a group of high-spirited teenage boys living in a world of instant gratification. Instructor Rey Jose said in the beginning the work flowed but there was some frustration during the fiddley stages of construction when the youngsters thought things weren’t happening fast enough.

Jose described how individual students had perfected different skills and how the whole thing has been a learning experience for him, and one that has brought him closer to his students. “With doing the whole project, you learn from each kid individually just what they are good at. We’ve got guys here that are good at fiberglassing. We’ve got some potentially good carpenters, and we’ve got some good epoxy guys who know about the different components and what each one does. Then we have those who are here to sail.”

He adds that all the builders are thinking differently and now see the skills they are learning as something they can build on and use in the future.

Although a few girls have worked on the boat the school say that many more have shown an interest should they decide to build a sister ship.

Head of department Vital Carty was full of praise for the boatbuilders and their achievement. “Motivation is very high and the boys feel good about themselves. Sint Maarten has had boatbuilding before and I hope this scheme will put new life into it.”

Editor’s note: Garth Steyn would like to thank Aquamania for allowing him the time to take care of the project; FKG riggers for the rigging; St. Maarten Sails for the sails, and Mr Jeff Boyd and the St Maarten Shipyard for kindly donating space to store the boat.