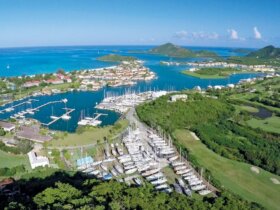 Jolly Harbour Yacht Club held its annual
regatta on the west coast of Antigua on the
29th and 30th of October.

Courses were set outside Jolly
Harbour and in to
Five Islands
Harbour. The winds were
fresh, the waters calm and the racing superb. Three races were set on the
Saturday and two on the Sunday.

The restored Columbia 34 of Colin Jones, Sydia, was sailed to victory in the
Cruising Class with the folk boat May
sailed single-handed all weekend by Charles Kenlock
in second overall.

The Racer/Cruiser class was highly competitive with margins as small
as two seconds in some races deciding positions. The 6 metre boat
Trouble sailed by Geoff Pidduck won four of the five races on corrected time but
was pushed into third by the modified J30 Blue
Peter steered by Iain Mellows and Tango
Mike steered by Tony Maidment on the Saturday.
Trouble finished first overall, with
Blue Peter second and
Encore third.