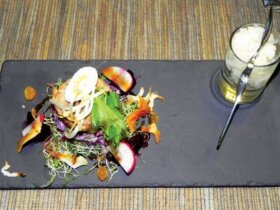 What could be better than to jump in and snorkel straight from your boat? It’s the epitome of cruising. Everyone has their own preferences but there is something to see in almost every anchorage. And you don’t need to snorkel on a reef to enjoy the underwater delights. Here are ten of our favorites up and down the East Caribbean. Where are yours?

Underwater sculpture park, Moliniere Bay, Grenada
It’s wonderful to hunt for the underwater sculptures at Moliniere Bay just two miles north of Grenada’s capital St Georges. Mooring buoys have been installed and a small fee is charged. Not only are the sculptures by Jason deCaires Taylor fascinating to look at but they provide an environment for new marine life to grow in an area that has suffered storm damage in the past.

Tyrell Bay, Carriacou
There are numerous snorkeling destinations in Carriacou; Anse La Roche, Sandy Island, White Island to name a few. But I love to snorkel straight from the boat in Tyrell Bay where you will find flying gurnards, moray eels and sea snakes, and a kaleidoscope of colorful fish around old moorings and wrecks.

The Pitons, St Lucia
Saint Lucia has several good snorkeling spots at the south end of the island but I always enjoy jumping off the boat between the Pitons and snorkeling the coral gardens that fringe the underwater sides of the famous twin green peaks. Watch out, the currents can be strong.

Les Anses d’Arlet, Martinique
You will not find many coral gardens here, but that doesn’t mean you shouldn’t don your mask and snorkel. Below the surface you will always find life – moray eels, sea snakes, turtles and a plethora of fish call these waters home. Anse Noir a mile to the north is another fun spot to snorkel.

Isle Des Saintes, Guadeloupe
It’s always enjoyable to snorkel the bays of Pain De Sucre or Ilet a Cabrit. Whether you spot a sea turtle or an octopus hiding in the rocks there are always plenty of colourful parrot fish or shy puffer fish and colourful yellow and purple fans to enjoy.

Anse de Colombier, St Barth
Anse de Colombier is another firm snorkeling favourite. It’s such a pretty bay to swim from either your boat or from the beach. There is always plenty to see in the rocky outcrops on either sides of the bay including octopuses and angelfish, colourful anemones and gorgonians. Near your boat spotted eagle rays, turtles, remoras and even nurse sharks glide gracefully across the seabed.

Benures Bay, British Virgin Islands
The baths at Virgin Gorda are the obvious and popular place to snorkel in the BVIs; though my favourite is the quieter Benures Bay on Norman Island. The snorkeling around the edge of the bay is excellent – a kaleidoscope of colours waits beneath the surface of this coral rich reef system.

St John, United States Virgin Islands
It’s easy to have plenty of favourite spots in the USVIs – it’s great to pick up a free mooring at Christmas Cove to swim with the spotted eagle rays. Or around the rock at Waterlemon Cay on St John with its large elk horns and colourful fan corals. But my favourite is the unusual spot at Hurricane Hole amongst the fringe forest mangrove. Unique in that it is not your usual murky mangrove, but crystal clear waters to view the magical bright corals and fish that grow on and live amongst the mangrove roots.

After severe restrictions - those BVI lovers who didn’t mind negotiating the protocols - trickled in to enjoy the uncrowded pristine destination.