Recently there has been a surge of innovation in large outboards pushing the boundaries with maximum horsepower and performance for larger boats. But innovation can also be found in a line of portable outboards now available from Tohatsu. Smaller craft can also benefit from the latest in design and technology and the company’s newest offerings in its 20hp, 15hp and 9.9hp outboards can deliver those benefits.

Nicole Corvellec, the Group Services Marketing Manager at Budget Marine Group, the exclusive dealer of Tohatsu in the Caribbean, explained that the company has done very well with the popular two strokes from Tohatsu but it sees a bright future for the new light and reliable four-stroke motors now being offered. She sees these new motors growing in popularity as restrictions on two-strokes increases due to their emissions, the preference of quieter four-strokes increases, the lower cost to run becomes evident and because of the weight savings new models now offer. To make its already popular portable outboards even more desirable, Tohatsu has made some major design changes to the new MFS20/15E and 9.9E Sport outboards.

Starting from the ground up Tohatsu designed these outboards to be the “lightest battery-less” fuel injected outboards on the market. Incorporating new technology and exclusive designs the company has been able to create four-stroke outboards that are considerably lighter than comparable motors, along with simplified operation and service. Some of the weight saved by the new design is accomplished via the new electronic fuel injection system that does not require a battery to operate. This equates to a saving of about 33Ibs or 15kg over some competitor’s models that require a battery. Even with the battery out of the equation these small outboards are between 5% and 20% lighter than some competitor’s models. This weight savings has been accomplished with trimming the amount of metal required by incorporating more efficient designs and engineering, along with technology mentioned below. 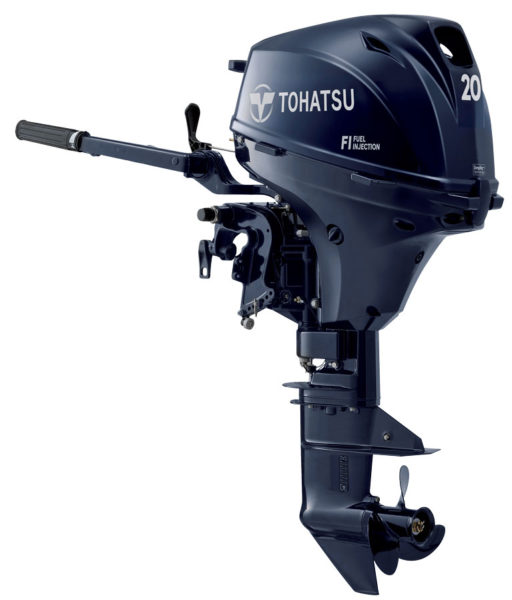 Electronic fuel injection, or EFI, is commonly found on larger outboards but these smaller portable engines can also benefit from this technology. By monitoring airflow and density the fuel supply can be precisely controlled by the onboard engine control unit, or ECU. Thanks to this exact fuel supply, regardless of temperature or engine state, the outboard can enjoy better throttle response, resulting in smoother operation and with more sensitive throttle control. This EFI unit also allows for easier starting (particularly for a cold start or in colder climates), smoother idling, improved fuel efficiency and the elimination of common carburetor issues. It even allows for easier initial set-up for use in extreme temperatures and altitudes. Other improvements to the fuel system include the incorporation of a high-pressure fuel pump and a fuel cooler inside the vapor separator tank, saving weight and space. Insightful engineering also allowed for various sensors and speed control valves to be integrated onto the throttle body, again saving weight and space.

Tohatsu didn’t stop innovating with its electronic fuel injection system. It made improvements throughout the motor. This included its fuel filtration system with a new easily replaceable fuel filter that can indicate when water is present. If viewed the water can easily be drained without tools via a valve at the bottom of the filter. The motor also incorporates a tiller handle that has been designed for easier and more comfortable operation. There is even a fold away carry handle on the motor to make moving this surprisingly light outboard even easier. Vibration is kept to a minimum with improved engine mounts and dampeners. Sound is also kept to a minimum via a modified intake silencer, a muffling chamber and improved cowling seals. All this results in a quiet motor that has “an operator’s sound pressure that is just 60dB.”

These outboards even run cooler than their predecessors. Engineers searching for all possible ways to improve on performance of this line of outboards discovered that the front of their outboards was up to 5-10 degrees Celsius or 9-18 degrees Fahrenheit hotter than the back of the outboard. As a result the air intake has been redesigned to draw in the cooler air, improving performance. Engineers also reduced the temperature of the engine’s thermostat keeping the engine oil and engine cooler and running more efficiently. Other innovations include larger intake valves and moving heavier engine components such as the crankshaft and driveshaft slightly forward, making it easier to tilt the engine up. Even the steering radius has been improved from 70 degrees to 90 degrees for greater maneuverability.

With all these improvements to the new MFS20/15E and 9.9 Sport not only are they lighter, quieter and easier to operate than ever before but they benefit from better performance. Acceleration, top speed, fuel consumption at all levels and fuel efficiency are vastly improved and better than some competitors. With all these improvements it is easy to see why Budget Marine sees a bright future for these new outboards.