More people know him by name rather than by face. That’s because Tim Wright is generally behind the lens instead of in front of it, aboard his 12ft, 15HP rib with signature shovel-crafted tiller extension that allows him to stand, drive and photograph Caribbean regattas. Interestingly, Wright never planned to make photography a profession or call the Caribbean home. Yet the UK native seized upon the power of serendipity and has become one of, if not the most famous Caribbean yachting photographer.

“I have always been interested in photography,” says Wright, who at age 14 set up a darkroom at home in Malvern, Worcestershire, taught himself to process black and white film, and later progressed to color processing as well. “But it was never more than a hobby at that time.”

A decade-plus later, a friend introduced Wright to yachting with a day sail on the Solent. Two years later, having completed Royal Yachting Association (RYA) courses, he left his job as a salesman and sailed away single-handed in an Elizabethan 29, on the first Atlantic Rally for Cruisers (ARC) to the Caribbean in 1986.

“I never planned to move to the Caribbean as I vaguely intended to circumnavigate, although I was really just looking for adventure and an escape from a normal lifestyle,” Wright says.

By 1992, Wright was living on his Roberts 34 in Bequia, nearly out of money but still with the good camera in hand that he brought over on the ARC. Fate took over when a Boxing Day round the island race was organized.

“I had the cunning plan of sitting out on the start/finish boat and photographing all the participants. Of course, there was nowhere on Bequia to get film developed, but since all the boats were staying in Bequia for New Year I had time to go over to St. Vincent on the ferry, get the pictures printed and go back to sell them,” he explains. 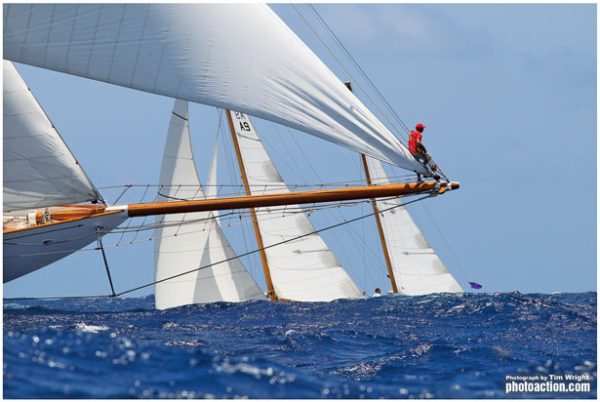 A very positive response led Wright to convert Adhara into a live-aboard photography studio thanks to a loan from his parents. He set up an enlarger on the settee berth and taped a blackout curtain around it. He incorporated sleeves, which enabled him to put his arms through the curtain to control the enlarger. Film and prints were processed in a revolving drum, which was in turn inside a water bath. Although the process was slow, messy and difficult, Wright could achieve his aim, which was to photograph several boats in the afternoon and present framed 8 x 10-inch prints to boat crews the following morning.

“I photographed the Bequia Easter Regatta, and at the end of the season I thought it a good idea to sail up to Antigua and photograph the Classic regatta and Sailing Week. Soon after, I bought my current boat Seascape, a 43ft Wauquiez Amphitrite ketch, and started covering other events like the St. Maarten Heineken Regatta,” says Wright.

Tech-savvy before it became popular, Wright transitioned to digital in 1998, the same year he created his website photoaction.com. This is likely the first photographer’s site that used a searchable database to sell images. Digital photography changed Wright’s life and career. For example, it created a practical way to shoot the ARC arrivals in St. Lucia, which take place at all hours over several days. He also had more freedom to travel, and began to photograph a few summertime events in the UK and Europe.

“The Canon EOS 1Ds camera, which I first bought in 2003, was a real revolution. The quality was better than any 35-mm film camera, so suddenly my images were no longer second class, but state of the art. I remember going to Cowes Week in 2003 or 2004 and putting a 20×30-inch print in a shop window in Cowes High Street. I happened to overhear Ken Beken (fourth generation veteran UK marine photographer) and his sidekick Peter Mumford looking at my picture and arguing over whether the image was shot with a digital camera or not, because it was ‘too good’ to be digital,” he says.

Most recently, Wright has added aerial drone photography to his repertoire.

“More of the same until I can’t do it any more, I guess. I will be sixty this year and I don’t know how long that will be, but fortunately I am not falling apart just yet.”