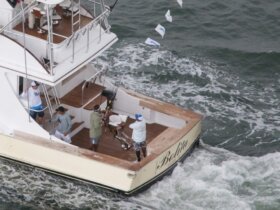 There’s a natural annual migration of blue marlin as these magnificent billfish swim north and south throughout the Atlantic and Caribbean seas. In a parallel fashion, some of the best sports fishermen in the world follow the bite and compete against themselves for personal records or against one another in tournaments.

Bragging rights, like in many sports, are a big part of fishing. So, wouldn’t it be great to compete in a series – or series of series – where you could win a leg, win one series or win them all?  Thus entered the Bermuda Triangle Series (BTS), now in its 4th year, which was a brainchild of St. Thomas, U.S. Virgin Islands fishing stalwart Jimmy Loveland.

The inaugural event in the SMS kicked off with the Venezuela Open, held March 22 to 25 as part of the International La Guaira Billfish Shootout. Five of the entered boats participated with Clapp’s Team Affinity in the lead with 4,100 points. The bite was certainly on, as the 17 boats entered in the Shootout collectively caught and released, says tournament director, Rick Alvarez, “85 blue marlin, 24 sailfish and a lone white marlin in three days of fishing.”

June saw the second leg of the Spanish Main, the Punta Cana Open, fished in the Dominican Republic June 28 to 30, and the 2007 BTS kick-off with the Bahamas Open, fished out of Boat Harbour, in Abaco, June 12 to 16.

This month, the BTS continues with the Bermuda Open, in Hamilton, July 7 to 9. “Bermuda is fertile grounds for big billfish”, says Capt. Alan Card, a native Bermudian who charters his 40-foot Gamefisherman, Challenger and has led anglers over the years to six of the ten granders caught off the island.

Next month, August, sees the third leg of the SMS at the San Juan Open, held as part of the San Juan International Billfish Tournament (IBT) fished out of Club Nautico de San Juan, August 16 to 22.

Luis Infanzon, a member of Team Mojito and IBT tournament director, says, “Sports fishermen can catch-and-release blue marlin weighing up to 1000-pounds, or more, in the legendary ‘Marlin Alley’, a 100-fathom trench just 1.5 miles off the coast of San Juan. The record catch here was a 1086-pounder caught by Roger Medlock from South Carolina.”

The Bermuda Triangle Series concludes and the Spanish Main moves into its fourth leg at the USVI Open/Atlantic Blue Marlin Tournament or the ‘Boy Scout Tournament’, held out of St. Thomas, August 25 to 29.

Loveland says, “Last year’s event was a huge success, with 37 boats and 110 anglers releasing a total of 144 blue marlin, or an average of almost four blue marlin per boat over the four-day tournament, all on relatively light weight 50-pound test line that requires adept angling skill,” says Loveland. “We’re expecting 40 boats this year.”

Finally, the SMS will wrap up with the Boqueron Open, held September 28 to 30, out of Club Nautico de Boqueron.  The waters off Boqueron, meaning the west coast of Puerto Rico, have a unique feature: The Mona Channel. Stretching to depths of over 3,600 feet in some spots and formed where the Atlantic Ocean and Caribbean Sea meet, working the seamounts and drop-offs can raise a bevy of blue marlin, mostly those in the 75- to 200-pound range from August to October.

True to the spirit of the SMS—the name given to the Caribbean coast of the Spanish Empire in mainland Central and South America during the 16th to the 18th century and a region of enormous wealth and pirating—
the winning angler of each leg of the series will seize the booty of a black coral-encased gold doubloon, fashioned by the famed Bernard Passman and stamped with a blue marlin.

“A gold doubloon is a very valuable coin and, likewise, the angler who wins one of the legs of this series shows the world that he or she is one of the best in the world,” Loveland says.

What’s next on the horizon?  “By 2009, I want to punch through to the Pacific with the Pacific Rim series which will incorporate four legs, one each in Panama, Costa Rica, Guatemala and Mexico,” says Loveland.

And after this? In 2010, Loveland foresees winners of the USVI Open, the Bermuda Triangle Series, Spanish Main and Pacific Rim, all competing to see who is the best over on the Great Barrier Reef off Australia. How’s that for a challenge?

For more information and to register, visit: www.abmt.vi 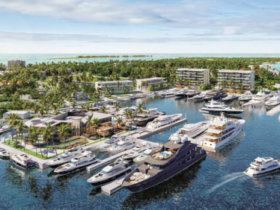