Home Boat The Most Powerful Outboard Motor Ever 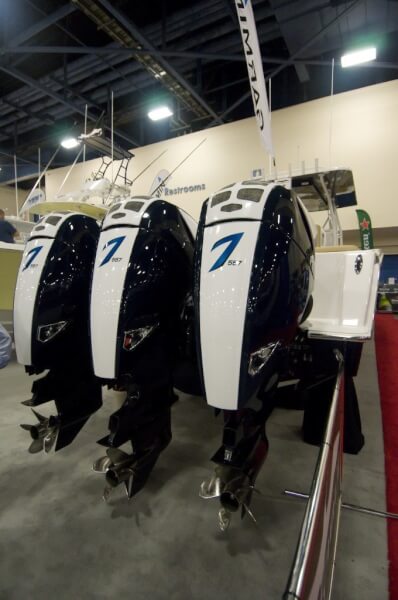 Until recently on larger outboard performance boats if you wanted high horsepower output you would have to go with double, triple or quad outboards to get the desired power and speed. Adding engines added weight, drag, reduced fuel efficiency and drove maintenance costs higher, but there was no other option until recently.

Seven Marine has taken new technology and has been able to build an outboard like no other that outputs a whopping 557hp and does so at a weight and size that is not much more (and in some cases less per pound per horse power) than some of the largest competitors’ motors. By doing so they have been able to create power options that were not previously possible for today’s popular outboard boats, thus opening a new era in marine outboards. Now boaters can go with a single engine where two were previously necessary, a pair of engines where three were needed, or even triple Sevens in place of quads. Less motors translates to less weight, less drag, greater simplicity in rigging and economy in maintenance.

These incredibly powerful outboards are actually powered by a GM LSA 6.2 liter supercharged V-8 (the same motor found in the Cadillac CTS-V). This muscle car, high performance engine is coupled to a specially designed ZF Marine transmission, making it the first outboard to offer an electronically controlled wet clutch shifting system along with a horizontal crankshaft. Seven Marine is actually the first company to create a production outboard using an automotive V-8 supercharged engine and doing so in this format.

The engine from top to bottom is a unique design. From the pivoting cowling that opens much like the hood on a car to the Corvette-inspired cowling ports, this engine breaks all the traditional outboard conceptions. Other innovations include a completely closed loop cooling system that keeps corrosive raw water out of the system. Even the valve train was designed to be maintenance-free, unlike other high performance outboards, thus keeping service costs down. The exhaust system is also unlike other outboards. The unique dual exhaust boasts a 3½-inch pipe that reduces backpressure and increases performance. It’s a dual overboard system which allows for a surprisingly quiet ride for such a high performance motor even at full RPMs. Other unique aspects of this motor include a completely purpose-designed twin pinion gear case to allow for maximum torque and performance at the prop. Even the color of your Seven Marine outboard is unique. You can select any color or combination of colors to customize your motor.

Another first on the 557 is an integrated power steering system. Gone are the days of cluttered transoms with external steering cylinders and related component. The built-in hydraulic steering cylinder is built directly into the motor mount and is easily serviceable. Steering these beasts is easy and effortless and the system works well in single engine applications and multiple engine rigs.

Seven Marine has created a new outboard from the ground up and has forever changed the perceptions and limitations of outboards. Although not an inexpensive option at $70,000 each, their capabilities and ingenious design will see them gain in popularity. All you have to do is ride in a boat rigged with these motors and you’re hooked.