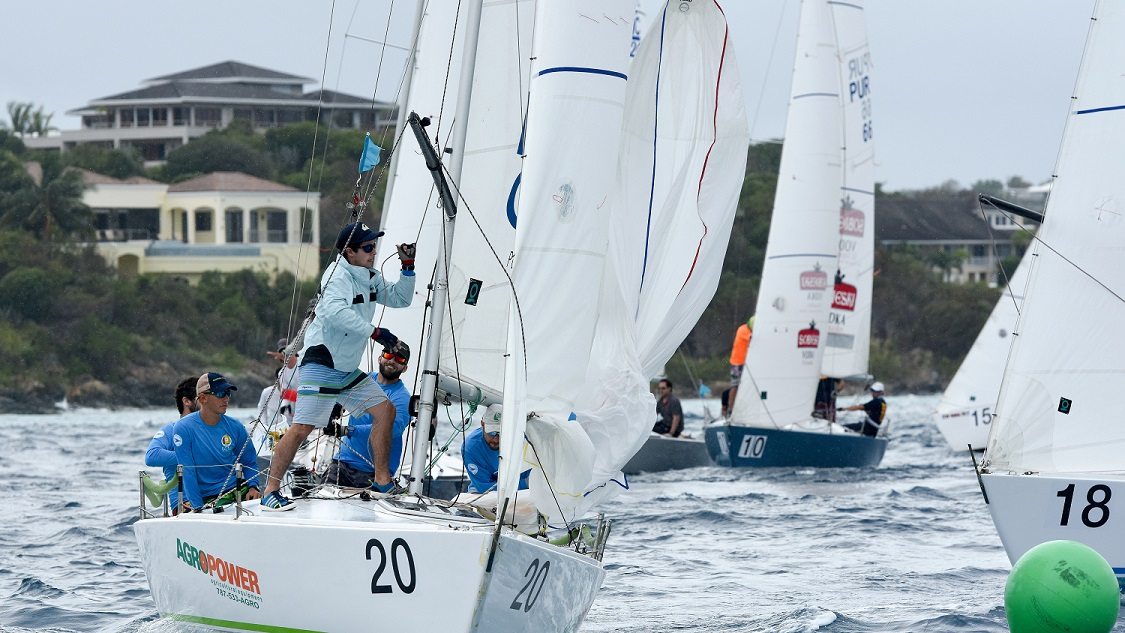 St. Thomas, U.S. Virgin Islands. The bite slowed a bit today, but not the excitement as eight boats are now tied in points with five blue marlin releases apiece at the conclusion of day three in the USVI Open Atlantic Blue Marlin Tournament (ABMT) or ‘Boy Scout Tournament’ so nicknamed for the event’s chief beneficiary. The 28-boat continued canvassing the fishing grounds from the North Drop east to Anegada and collectively released 22 blue marlin today. This combines for a total of 84 released marlin in the first three days of tournament fishing.

The team aboard, Wave Paver, a Florida-based 61-foot Garlington, went fishless today, but held its lead by being the first to release five blue marlin.

The seven other boats with five releases apiece are as follows and in descending order based on time on the scoreboard: Casca Dura, Free Spool, Gulf Rascal, Jichi, Chach, Black Check and Debaitable.

“This is when all the fish you’ve missed really hurt,” says Albert Castro, one of the anglers aboard the Florida-homeported 68-foot Paul Mann, Jichi. “We released three and missed two on the first day, didn’t catch anything yesterday, and today we released one and saw two that didn’t bite. The beauty of fishing a tournament that’s four days long is that you can have one bad day and still be in it at the end.”

The eight-way tie for first is definitely something special.

“I’ve never seen this before. It’s amazing. It’s going to make for a really exciting last day on Thursday,” says Louisiana’s Damon Chouest, who is fishing aboard his Monterey 58, Chach. “It’s even more exciting when you consider that on the last day there is a lot up for grabs – top boat, top angler and top junior angler.”

If there was a prize for the best fish tale, Florida’s Tom Greene, who is fishing aboard the 61-foot Garlington, Reel Lax, would definitely win. The saga started late in the afternoon on the tournament’s second day. That was when Greene’s rod all of a sudden started screaming and peeling off line.

“I jumped in the chair and put the drag on, but the line keep peeling off,” Greene tells. “We couldn’t see what it was. We only saw that there was something big and black under the water. Finally, I was down a half spool of line and it went calm. I kept pumping and got about 200 feet of line back on the reel when it went down again. I fought it hard and kept trying to pump it up when the mate grabbed the leader and yelled that he couldn’t believe what he saw. It was an 8- to 10-foot manta ray. I’ve never in my life seen or heard of something like this. It was definitely a unique situation.”

In angler standings, Mike McCarthy aboard Black Gold is in the lead with four blue marlin releases. Ten other anglers have released three blue marlin. These include Mike Brauser aboard Betsy in second and Scott Glasscock aboard Wave Paver in third.

Sports fishermen will enjoy a lay day tomorrow and then the tournament concludes on Thursday. The ABMT’s Awards Ceremony takes place Thursday along with the naming of the 2013 USVI Open/Atlantic Blue Marlin Top Angler, who pockets a $10,000 cash prize.

The public can catch the spirit of the sport by walking the docks and watching the big rigs come in around 6:30 p.m. and counting the number of marlin release flags flying from the outriggers. Anglers in this conservation-oriented tournament have not killed a blue marlin since 1986. The more flags, the more marlin the boat released, and the winner is the one who releases the most blue marlin first. Commemorative tournament T-shirts, hats and more with original art will be on sale each night.

The Moorings Opens Newest Charter Base in St. Thomas, USVI

The Moorings, known as the world’s premier yacht charter company, opens its newest base at IGY’s Yacht Haven Grande in March