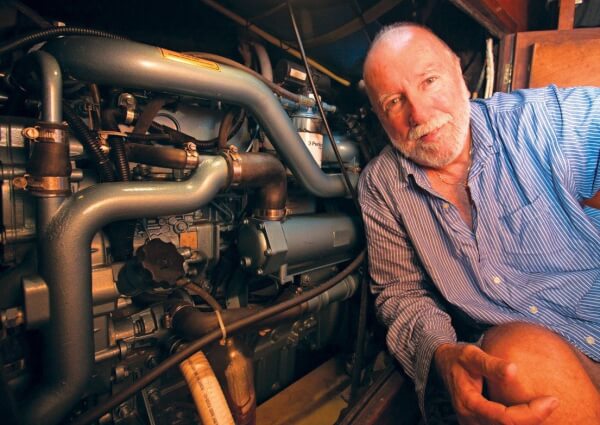 I want to congratulate the Silent Sailor™ group of marine diesel manufacturers for producing their ultra-quiet ‘stealth’ line of auxiliary engines for sailboats. In true capitalistic fashion, they found a major need in the global marketplace and filled it—soundlessly. They wisely realized that most blowboaters can’t actually sail worth a damn, and yet would love to pretend they can. Hence, the Silent Sailor™ concept.

Let’s face it—at best cruising blowboaters, stickboaters and ragmen are hypocrites. Even with their auxiliary engine permanently switched on, they look down their nose at stinkpotters. They openly sneer at what they refer to as gin palaces. Yes, ragmen are hopelessly prejudiced. They often disparagingly and disdainfully refer to motoryacht skippers as gearheads, wrench-twisters, carbon-eaters, or worse.

Cruel, eh? This is sad but true, and it is part of the reason why sailboaters and powerboaters mix like oil and water. Powerboaters want to get from Point A to Point B, and are happy to use overwhelming force (and all our planet’s remaining fossil fuel, if need be) to do so. We sailboaters, on the other hand, prefer a purer, more ecologically pristine approach—at least in theory.

Okay, okay, I have a confession to make, dear reader. I have a gas/water device aboard my sailing vessel that discards my engine’s exhaust water invisibly beneath the surface. And, since my engine is relatively new, my above-surface exhaust gases are clear at 2,000 RPM. Thus, my sailing and yacht racing friends cannot tell when my engine is running, and thus I run it a hell of a lot more …

Let’s put it another way—the weatherliness of my vessel is very much RPM-related.

There! I’ve broken the sacred Code of Silence all sailboaters have been secretly required to swear to since Moses parted the Red Sea with the help of Joshua Slocum.

For example: I used to keep my boat in Great Cruz Bay, eight nautical miles downwind of our annual sea gypsy Christmas party in Coral Bay. Thus I’d morosely power (like Scrooge) dead-to-windward along St. John’s south coast until just before I came into view of the our Yuletide raft-up, and then shut off the iron jib and hoist the real jib—for a couple of minutes of strong, macho-man visuals. This would impress-the-hell out of my mostly dumb friends.

Frankly, I have no other kind.

Even better, I also have the Yacht-Pack Bose Noise Cancelling System installed in my engine compartment. This effectively masks the sound of my running diesel to my onboard guests.

Dozens of exterior speakers (Bose cleverly disguises them as stanchion tops) are pro-active and replay the soundtrack of a real sailboat under sail—and our ‘reggae-kissed Caribbean cruising soundtrack’ even has the stereo sounds of flailing sheet lines as we tack!

Of course, there’s still some vibration from my Perkins diesel, true.

“The bearings in our watermaker are starting to go,” I say in haughty dismissal.

This means my tubby cruising sailboat goes to windward like a witch. “Wait a sec,” one bewildered fellow boater yelled at me as I passed him on the lee side, “how are you doing that with all your sails luffing?”

“Some people know how to trim a fluttering sail, and some don’t,” I blithely replied.

Of course, I’m willing to share some of my tricks—if I meet a simpatico sailor.

“How many RPMs do you motor at?” I’ll ask quietly to test the waters.

Most of my guests are easily duped by switching off the engine panel while pretending to shut down the wind generator.

“Zero RPM,” I shout out gaily while pointing at the suddenly-dead gauges, “Oh, we’re sailing now!”

“Oh, dear,” my wife Carolyn shouts up theatrically, as instructed, “Our prop is still spinning! IT MUST BE STUCK!”

“Thanks,” I say as I make a big deal of fooling around with my shifting lever, “There! I think our Max Prop is feathered now … just needed a bump. I guess I’ll have to re-grease it soon.”

How to Unwrap a Wrapped Prop

The shore huggers almost always fall for this.

We’ve had guests ‘sail’ with us for a full 120 gallon tankful—and never realize those flapping white floppy things are just up there for show, audio-enhancement, and cosmic brownie points.

Of course, new sails still count. For example, my new genoa only burns 1.125 gallons per hour in 18-to-20 knots of breeze.

Once a prying, too inquisitive guest felt the warmth of our engine compartment doors and hoisted an eyebrow. “That’s where the onboard fish smoker is,” I explained. “Smoked marlin is mighty tasty—especially if you’ve smoked something else first.”

On our present vessel—a 43-foot ketch named Ganesh, built by Wauquiez in France and marketed as a Palmer Johnson 43 in the US—we replaced the 60hp Perkins with an M92B Perkins driving a 2.5 to 1 reduction gear and a 24-inch heavily pitched three bladed prop.

This allows us to ‘dock’ in our slip under full sail—without stopping to figuring out which way the wind is blowing or any other archaic nautical crap.

Hell, my current vessel ‘prop walks’ to port in reverse faster than my previous vessel sailed to windward. And—honestly—leaving your sails up while in the slip sure makes the next day’s boat prep easier.

Alas, stinkpotters miss all this nauti-joy. Sadly, there’s no trickery or deceit in ‘em. They like big wakes, big exhausts, big sounds, and zero adulation. Plus, stinkpotters ain’t intrinsically cheap like we sea gypsies—why, I met one who actually paid his shore bills!

Of course, I watch my language. I don’t go to the fuel dock, I ‘water up’ with two hoses. And reversing the polarity of my engine hour meter allows it to run backwards—if only aging were that easily cured!

Sometimes, while conversing with my wife, I forget other sailors are listening—then abruptly remember.

“Check the fuel gauge,” I’ll start to say, then end with, “for our apparent wind!”

Once she winked at me and asked, “When is the last time we changed our mainsail lube oil?”

“How ‘bout a little less sail trim,” she says when she thinks I should throttle down.

We keep up the charade, even at the fuel dock. To check the pump’s meter read out, I don’t just blatantly stare at it. Instead, I wet my finger, hold it up to the wind, and then stare past it at the rotating gallon readings on the diesel pump.

“Do you think we’re full … er, that we have enough wind to sail all the way,” Carolyn will ask me.

“Let’s take another 20 gallons of wind aboard, and that should last the entire cruise,” I say in smug response.

Boy, is it ever simple to trick people!

You see, dumb people don’t know they are dumb!

Once, while coastal cruising with guests, our engine unexpectedly stopped. I immediately donned a dive mask, jumped in, and was happy to report as I resurfaced, “… not a biggie! We just sucked a plastic bag into our … er, our mizzen boom!”

Yes, we have an anchor windlass, and, sure, it would be crazy to hoist 220 feet of chain without the engine’s alternator running to replenish the amperage, so cranking up initially is almost mandatory. And once everyone is accustomed to going 7 knots directly into the wind—why spoil such a nice point-of-sail by turning off the engine?

If Carolyn, who is my navigator, thinks we’re going to arrive at a strange harbor before dawn, she whispers to me in passing, “Take a reef in the throttle, please.”

Of course, someday all this will be for naught—when we have super-silent electric engines for power. Recently I was playing the part of Celebrity Idiot on a Chartering Catamaran Flotilla, and I couldn’t believe how well the tennis court I was pontificating aboard tacked in a nearly windless chop. (Well, until I noticed its skipper nonchalantly ‘bumping’ his electric auxiliary to silently ‘help him around’ during the tacks.)

I, personally, have always fancied myself as a bit of an inventor. Right now I’m working on a pair of oars, which have Lithium D-cells hidden in the handle to power the tiny camouflaged props on the lower corner of the blades. (These are great if you want to impress the folks at Wooden Boat with your Ashe Breeze—or any marine yuppie group, for that matter.)

Anyway, my ‘modern, effortless oars’ are silent, less fatiguing, and never get tired. They love going to windward—and are perfect for faking a sustained cardio workout. Thus, they’re a clear win-win for the deep-pocketed, generously-waisted sailor with shallow breathing.

Isn’t it funny that as a young, drug-sucking party animal prowling the docks of the Caribbean, the term wasted was spelled one way, and now that middle-age spread has settled in, waisted has an entirely different connotation?

Laser racing dinghies can now be purchased with an underwater ‘outdrive’ unit pre-attached via Velcro™—and Optimist Prams are reported to be doing the same, and aiming to market their leisure devices specifically to the ‘young Rubenesque’ sailors brought up on iPad, iSailor, and iVomit—as well as other electro pacifiers and life postponers.

Of course, there are always a few ‘purists’ who think a sailboat should have actual sails—unlike the charter vessels in Turkey that have a chicken-wire lump under the sail cover to simulate where the sail should be. Clever, eh? Cheap, too! And, hey, this is the future, and there’s no real place for the ‘white floppy things’ aboard a modern boat. Besides, the wind is fickle. And most people are perfectly content with a mainsail, headsail, and diesel! Why rock the boat?

Editor’s note –Cap’n Fatty and Carolyn are currently watching their RPM gauge in 20 knots of wind off Phuket, Thailand.

Cap’n Fatty Goodlander has lived aboard for 53 of his 60 years, and is currently on his third circumnavigation. He is the author of Chasing the Horizon and numerous other marine books. His latest, Creative Anchoring, is out now. Visit: fattygoodlander.com