All these are big pluses.

Right now, I’m hanging on a mooring at a sailing club that has nearly a hundred small racing sailboats in the 25 to 40-foot range. The majority of these boats have inboard diesels that almost never get up-to-operating-temperature in the few moments it takes their owners to pick up their mooring pennants. It is crazy to carry so much weight, confusion, and expense for a few pathetic moments of prop spinning. Plus, diesels that don’t get up to full temperature prematurely fail from cylinder glazing—double damn!

How much more sensible to have an electric propulsion system powered by a solar array—for these few minutes of weekly work (and the ability to solar charge for the rest of the 167 hours of the week).

Of course, petroleum engines in small sailing craft have only been around for a hundred years or so—example: the 1924 wooden Alden schooner I grew up aboard had a 25-hp Scripts engine (which ran just often enough for us not to be able to throw it away).

My point here is that our current production vessels are built around the engine as much as the rig. If electrical propulsion comes into wide use, it will immediately affect yacht design. For instance, modern diesels require a lot of plumbing for both cooling and exhaust systems—electric engines almost none. And, while electric engines are relatively small, their batteries are expensive, bulky, and heavy. Of course, you’ll be saving the weight of the fuel, fuel tank, and all the related fluids and spare parts required for cruising.

How all this adds up depends if you want to run your electric engine measured in minutes, hours, or days.

Another factor to consider is the fact that most of these engines run on 48 volts. How this higher voltage would work, say, aboard an aluminum boat that is susceptible to electro-galvanic corrosion is an open question. I don’t doubt it will work just fine when everything is new, well-insulated, and there are no electrical leaks… but 20 years down the road when things are getting soggy, who knows?

While Lithium batteries are increasing in reliability every day—the FAA still regulates them in numerous ways. Do you want to be offshore with something that isn’t allowed aboard a passenger plane—that is listed on the FAA webpage as ‘dangerous goods?’ And, even if the batteries can be ‘guaranteed’ not to burst into flame, aren’t the typical charge regulators used in marine applications originally designed to be used in a dry environment?

Is this being too picky or too negative? I don’t think so. We must advance on both reality and wishful thinking. The reason that I’m currently on my fourth circumnavigation without a major problem ever offshore—is because I allow others to work out the safety kinks on many new technologies. Example: marine refrigeration used to be undependable. Ditto, watermakers. I wisely avoided both until they reached a ‘maturity’ of dependableness. While I am clearly—and admittedly—no expert on Lithium batteries in a saltwater environment, these safety questions need to be considered, especially since the resulting high temperature fires are so difficult to put out.

Fire offshore is to be avoided at all costs. Just ask the crew of the mega yacht My Kanga, which burned in 2018. Or the dozen deceased men aboard that Russian sub. Or the skippers of numerous boats that burned for ‘unknown’ reasons in the battery compartment.

Obviously, solar cells will increase in importance aboard an electric boat—as will making the panels integral with the design/construction. (My Ganesh, a 43-foot ketch, has nine panels. Thus, we almost never have to turn our diesel on to generate electricity.)

How all this shakes out design-wise will be interesting and I am sure much of it will end up far different that we now imagine.

Am I trying to be negative by discussing these issues? Not at all. I’m pro electric marine propulsion but realize that we must stay fact-based as we improve on the technology we have. In essence, I want customers that buy boats with electric engines to say, “Wonderful choice!” not, “Oh, sh*t! Huge mistake! My boat doesn’t do what I want—and now I can’t sell it either!”

One thing I know for certain: prop flanges, prop shafts, prop struts, and props have changed very little in the last century. They rob massive amounts of power at the traditional stuffing box. I can barely turn my shaft by hand—it has a huge amount of friction! Surely there’s a way to add bearings that eliminate this massive friction. This must change quickly if efficient electric motors are to have a chance.

Numerous companies such as Oceanvolt, Electric Boat, Torqeedo, Wartsila Energopac, and ZF are making electric saildrives—some of which rotate 360 degrees for easier docking and, thus, eliminate the need for bow thrusters. Dozens of companies are making small electric outboards and trolling motors. While the current market is utter chaos, as it sorts itself out into winners and losers, much will be learned about both the technology and the marketing thereof.

I’m particularly intrigued by such vessels at the Hanse 315 that have the small prop/motor on the rudder. The result is a boat with more usable space inside and incredible maneuverability (because the prop turns with the rudder). However, the range is nil, the speed in rough water is nil, its stopping power is nil, its reverse capability is poor, and it adds between $15,000 and $30,000 to the price of a 32-foot boat—yikes!

The reality of today’s marketplace is that—instead of buying an ‘eco-star’ of a 32-footer, most buyers opt for the 38-footer with a diesel at the same price point. 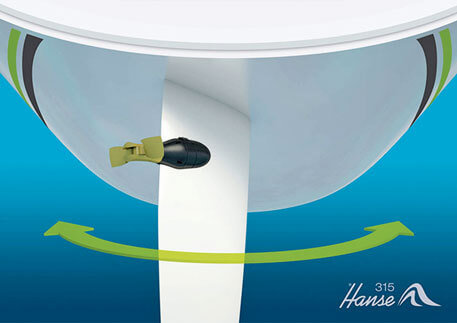 The bottom line on this Hanse 315: Its sales with a diesel have been good, its sales of the electric version have been poor.

Other considerations to such an ‘on-the-rudder’ set-up: Rudder bearings must be beefed up. And some early attempts put the prop so high (in order to get it closer to the upper rudder bearing to handle the thrust) that the prop came out of the water during severe pitching. Another problem: With a scoop transom and swimmers, this puts feet and prop in too close proximity. (Even sitting on the transom with feet or hands in the water was a danger on some early models.)

One area where there has been massive disappointment is the ‘co-generation’ or ‘re-generation’ concept. This is the idea that a sailboat with an electric engine would power out of the harbor and then, while daysailing, regenerate enough power via its spinning prop to recharge its battery to its former level of charge—and thus power back in on the electrical energy generated via its prop while sailing.

So far, every single owner who bought such pie-in-the-sky promises that I’ve talked to has called total BS.

Another idea that strikes me as odd is, to increase range on your electric boat—add a 110v or 220v generator. Yuk! This seems to me to be the worst of both worlds—dirty bilges and crappy power!

I have no desire to own a boat with a gen/set—absolutely none. Gen/sets and such mind-sets are exactly what I’m am sailing away from. My casual observation: The more 110v objects a sailboat has aboard, the less it actually sails and the more it hugs the docks. Yes, Winnebagos and other RVs with wheels need to plug in—but offshore sailboats? Why? To run air-conditioning and heat up the anchorage with noise and stink? Really? That’s not green. That doesn’t make me green with envy, it makes me green with revulsion.

As a person who lives aboard on the equator—within a degree of it—I find three hatches and two wind scoops a nice, quiet, non-stinking, sustainable solution that is kind to the planet.

While I think electric engines make a ton of sense for small daysailers, I believe they have a long, long way to go before they’ll replace my Perkins diesel. Why? Because I can power 1,000 ocean miles—that’s many days of powering, not a mere two hours. I can, and have during gales, powered directly into 40 knots of mature wind and ocean waves (while dealing with a jammed roller furler). If there is an electric auxiliary for my vessel that can accomplish this, I’m not aware of it. With my folding four bladed Max prop, I can generate tremendous bursts of torque—in both forward and reverse. This also means I have stopping power while docking. And, while my diesel requires regular maintenance, it is amazingly dependable in the sense that 10,000 hours between rebuilds isn’t unusual in commercial applications.

My own conclusions: Electric auxiliaries are the wave of the future. And they can be the present if you don’t mind paying more for far less capabilities. However, with a warming planet, our stark choice may soon be an electric engine or no engine at all.