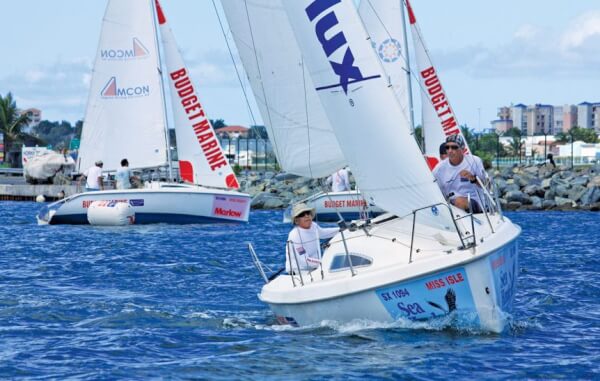 The second edition of the SIMSAF National Lagoon Championships was sailed in light conditions in October. Twelve teams competed in seven boats on a rotation schedule.

Light shifty winds challenged the participants and led to some intriguing battles on the start line and while approaching and rounding the marks. The gate on the short course resulted in some sailors taking a gamble and in some cases the gamble paid off and forced changes at the top of the leaderboard.

Garth Steyn, founder of the Kidz At Sea Foundation, entered three teams, one he skippered himself, while the other teams were skippered by Rien Korteknie and Iain Mobbs. The boats were manned by a combination of regular and new crew, ages ranging between 11 and 19. At one point, the three teams had their own personal competition and amazed everyone by finishing the race in first, second and third place.

Lunch and prize giving took place at Lagoonies Bar & Bistro and began with the St Maarten Sailor of the Year award sponsored by Gill USA. This year the award was made to Andrea Scarabelli in recognition of his contributions to the sailing community, his dedication in sharing his knowledge and technical skills as well as his passion for racing. In the Junior category the award went to youth sailor Zac Sabaroche of the St. Maarten Yacht Club for the dedication and perseverance he has shown while gaining experience in many types of boats including keelboats.

All participants were rewarded for competing in the SIMSAF National Championships and first, second and third place winners received sketches by the renowned local artist Roland Richardson.

Gary Brownhttp://garyebrown.net
Gary E. Brown is the Editorial Director of All At Sea Caribbean. He is a presenter on Island 92, 91.9 FM, St. Maarten, and the author of the thriller/sailing adventure Caribbean High. For more information, visit: garyebrown.net
RELATED ARTICLES
Barbados