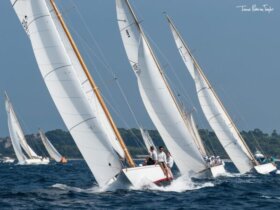 Some of the hardest working athletes at the BVI Spring Regatta and Sailing Festival were not sailing but selling. Their goal? Raising funds from raffle tickets so the five-member BVI Team Optimist (Molly Donovan, Matthew Oliver, Jason Putley, Sam Morrell and Robert Poole) from the Royal BVI Yacht Club can travel to the Optimist North American Championships (Optinams) this summer in Kingston, Ontario.

Over the past few years, the team has become a force in junior sailing in the Caribbean. Team members have traveled to and excelled at competitions as far away as Mexico, Curacao, the Dominican Republic and the United States. This talent and enthusiasm has emerged out of a growing junior sailing program at the Royal BVI Yacht Club.

"We can have up to 30 kids attend the summer camps," said Justin Da Silva from Toronto, Ontario who recently took over the coaching job from Chris Watters. "The after school program is for intermediate and advanced sailors, and we have anywhere from five to 10 kids at a time come out and sail on weeknights. The racing program, which includes both Optimists and Lasers, currently has eight kids."

Each country can only send five Optimist sailors to North American Championships. Therefore, one of Da Silva's first jobs on arrival was to select the events sailors would travel to in order to qualify. These included the Club Nautico de San Juan International Regatta and the St. Croix Yacht Club Hospice Regatta & Optimist Regatta, both held in February. Outstanding finishes included Morrell's first place in the White Fleet (age 10 and under) in San Juan and St Croix. Also in St. Croix, Putley, Donovan and Poole earned first, second and third place in the Blue Fleet (age 11 and 12), and Oliver took second place in the Red Fleet (age 13 to 15).

"I was really impressed with how they did," said Coach Da Silva. "It also enabled me to see what they need to work on in practices for this summer."

Team BVI members and their parents raised $1500 last fall selling tacos at The Charter Yacht Society Yacht Show, raised enough to pay for everyone's airfare to the Optinams via sales of raffle tickets, and will host a fun day at Cane Garden Bay as another fundraiser before they depart.

Most of all, what are the sailors looking forward to this summer? "Meeting people and sailing in a different environment," said Donovan. "To improve on last year's performance," said Putley, who will race his third Optinam. "Travel to somewhere new and see what it's like to sail there," said Morrell. And finally, "To do the best I can and have fun," said Oliver.