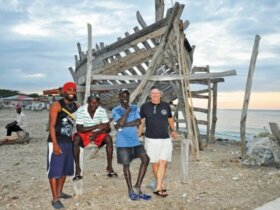 Among the many threats to our coral reefs mentioned
previously is the aquarium collection trade. “Aquarium collection
trade” seems rather innocuous considering the more visible, and some
think, more imminent threats of pollution, development, and over fishing.
However, when one learns the methods of collecting and the tremendous economic
machine behind the trade, it becomes another story.

According
to NOAA and many other well respected research and environmental organizations,
up to 20,000,000 live reef fish are collected each year for the aquarium trade.
In addition to the fish, corals and invertebrates are also captured and sold to
the trade. Almost every living thing we see when diving, swimming, or snorkeling
can be found in private and commercial aquariums and much of what we see in
those aquariums is caught in the wild since salt water species are very
difficult to farm. Those 20,000,000 wild caught reef fish fuel an industry that
generates the staggering sum of approximately $1,350,000,000 per year.

Where do
all those marine animals go? Import figures indicate at least 60% are sold to
private and commercial collectors in the United
States while the remainder goes to collectors in Europe
and Asia where some of the rarer fish are sold
by restaurants for $350 per plate; pick your fish from the tank and watch as it
is steamed, still alive.

Where do
all those animals come from? The Philippines,
the Indian Ocean, Taiwan,
the South Pacific,
Hawaii, Florida,
and, yes, the Caribbean. 36,000 fish were
taken from one reef in one month in the S. Pacific.

How do
they catch so many? Regardless of the fact that our seas cannot sustain a loss
of 20,000,000 fish per year there is an international move to employ
‘soft catch’ methods using small cotton nets. However, with
dwindling reef fish populations, the dire economic straights of some fishers
and the increasing demand from collectors, the traditional
methods of poisoning and blasting still prevail in many areas.

What poisons are used? Cyanide
and Rotenone. Although both are banned by governments around the world,
the fact remains that enforcement is almost impossible. With so few officers
and so much ocean, enforcement fights a loosing battle
every day and the ultimate losers are the Angelfish, the Clownfish, the
blennies, the sharks, the eels, the anemones, and all the other species
collectors covet in their displays.

Cyanide
and Rotenone are sprayed along the reefs where they stun the fish and cause the
gills to shut down; in essence paralyzing the fishes’ respiratory
functions. If the concentration of poison is too heavy the fish dies on the
reef. When cyanide is used, it kills the corals around the spray area. In warm
tropical waters, Rotenone can take 4 days to break down and dissipate. What
damage it does during that time remains under study.

Both
Cyanide and Rotenone cause death in humans. Reef fish caught with these
chemicals rarely survive (assuming they survive capture and shipping during
which up to 50% perish) more than 6 months in an aquarium. Necropsies have
shown liver and central nervous system damage from the poisons used to catch
them.

Blasting?
Yes, homemade bombs are dropped on reefs where they detonate and destroy
hundreds of years of coral growth. Animals that aren’t killed outright
are stunned and captured with many dying of internal injuries days and weeks
later.

As late
as 1995, a report by the Smithsonian Institute indicated that blasting and
poisoning were still being used in the Caribbean.
Think that it can’t be happening today?

Very
early one morning last year, before the cruise ship passengers arrived for a
day at the beach, I was diving a popular reef in the Virgin Islands; one of the
few times I did not have my camera along. Thinking I was the only person in the
water at that early hour, I was surprised when I saw another lone diver making
his way along the reef. It was evident he hadn’t seen me so I watched as
he stopped frequently to look in holes and crevices. When he realized he
wasn’t alone, he seemed shocked and confused, and he swam away very
quickly. It was only then that I realized he had a sprayer hidden in his gear.
As he disappeared from view I surfaced and found him walking away with his
trophies.

I reported
what I had seen and to where I had followed that collector. But, sadly, lack of
enforcement manpower leaves so many of our reefs unprotected and enforcement
personnel frustrated. However, I hope to encounter that commercial collector
again and I will have my camera.