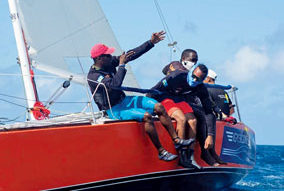 St. Lucia’s Frederic ‘Freddy’ Sweeney and his team certainly had the right attitude as they set sail in the 2018 Mango Bowl Regatta, hosted by the St. Lucia Yacht Club, November 30 to December 2. That is, “We just went out and tried to have as much fun as possible and that’s what usually gets us to the top,” says Sweeney, whose team of Dylan Charles, Ryan Alexander, Erik Simmons and Ricardo Charmon championed the highly competitive J/24 class. Sweeney’s J/24, Attitude, was one of 20 boats with over 100 sailors from St. Lucia, Martinique, Barbados, Trinidad, Grenada.

“Conditions were gusty and fluctuating winds. There was also a small swell rolling into the bay, which made mark roundings interesting. I’d have to say, though, our starts are what really made it for us. We raced in the combined J/24 Surprise class where there were 14 boats on the start line and we managed good starts almost every race. From there, it was usually a matter of just holding position,” says Sweeney whose team is a well-oiled machine having sailed together for a long time and whose class sailed 9 races in two days. “Most people like the Mango Bowl because there is lots of racing, plus the parties are great.”

“We would love to have a bigger cruising and racing classes next year,” says regatta director, Lily Bergasse. “This year, we decided to finish racing at noon on the last day. We held the BBQ Prize Giving soon after on the beach in front of the St. Lucia Yacht Club, where boats could simply anchor off the beach, be shuttled in and then sail off home in the mid afternoon or stick around a day to make it north or south home  to neighboring islands.”

Organizers aimed to maintain their Silver certification as part of the Sailors for the Sea Clean Regattas program in several ways. One was a clean-up of Reduit Beach as part of the Keep St. Lucia Clean and Green campaign. Others were no single use plastic employed in the regatta. Crews were offered reusable water bottles and there was a water station manned by volunteers from Caribbean Student Environmental Alliance (Caribbean SEA).

Next year’s Mango Bowl Regatta will be held November 29-December 1.