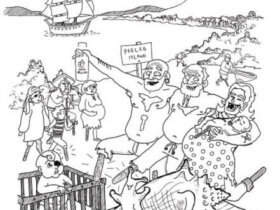 There is a new annual regatta in the British Virgin Islands and sailors are already looking forward to next year.

"Thank you for a great event, the sailing was great and the parties were first class," said Captain Ross Munson of the seven-month-old, 82-foot superyacht Aiyana as he left the dock on Sunday afternoon.

Aiyana placed second in the inaugural Superyacht Regatta and Rendezvous, which took place March 16 – 19th on Virgin Gorda. The event was staged at the new North Sound Yacht Club and Oil Nut Bay Beach Club on the island's east end.

"The breeze was pretty light this week, and the big boats don't always like the light air," Captain Munson said. "But it worked for us, because we are a slightly smaller boat."

A total of 12 courses were created to give organizers 'plenty of options' depending on weather conditions. Most of the courses included races around islands, including Virgin Gorda. One race was held each day and lasted four to five hours.

The crew of Aiyana liked the around-the-island courses, where they had seen a couple of whales. "It was close competition. For a lot of these big boats the challenge is just getting them around the race track. There is so much engineering; they are so complex with computer systems. Not only do you have the race sailors onboard, but you also have the technical team to keep them running," Captain Munson said. He added, "This is the cream of the crop of superyachts."

The 16-member crew was heading to St. Thomas to compete in the Rolex Regatta and would be returning to the BVI the following week to compete in the BVI Spring Regatta. Other competitors were headed to the St. Barth Bucket Regatta.

Twelve motor yachts and ten superyachts competed in the three-day event. All of the boats had to be at least 24 meters to qualify for the regatta. Some yachts had as many as 30 crewmembers.

BVI resident Mark Stephenson got the opportunity to race on the 138-foot winning yacht, Hunuman.

"Racing on Hanuman in the inaugural BVI Superyacht Regatta was unlike anything I've previously experienced," Mr. Stephenson said. "I've raced on other bigger boats, but none that came close to the sailing power of this J-Class, which is really a true superyacht and an exquisitely crafted museum piece."

CEO of Boat International Media Tony Harris said the event was unique, because "nobody has ever done a regatta and rendezvous together." Despite hosting events around the world, the Caribbean proved to be a challenge.

"It is pretty complex, because we have two sets of events going on simultaneously for the sailboat owners and the motor yacht owners," Mr. Harris said.

As sailboats headed to the starting line, motor yacht guests participated in social events like dressing as pirates and taking part in a 'treasure hunt'.

In the evening sailors and guests attended lavish parties, including the Full Moon Party on the last night where guests, dressed in all white, were treated to fireworks.

"This is just a start," Mr. Harris said. "We are pretty sure this will be the smallest event we will do here. It is going to grow and grow."