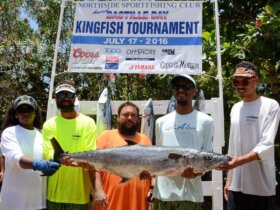 Two hours after lines in, David Stuedell felt a tug on his line unlike any other he’s experienced in more than two decades of fishing in this year’s 30th anniversary Bastille Day Kingfish Tournament. On the other end of his line was the 45.55-pound whopper that ultimately earned Stuedell the Largest Kingfish prize. Stuedell, a part-time St. Thomas resident, was fishing aboard the 39’ SeaVee Silver Fox with Captain Chris Berry at the helm. He was one of 167 anglers, including 30 junior anglers, on 54 boats who fished in this Northside Sportfishing Club-hosted tournament named one of the Top Ten Best Ways to Celebrate Bastille Day in the World by online travel advisor, Hotwire.com.

“We caught several smaller kingfish early. Then, the tides were good, so we headed back through the same area, which was west of Savannah. That’s when something pulled my line like you wouldn’t believe. I knew right away it was a good-sized fish,” tells Stuedell, who first fished the tournament in 1992, owned Hull Bay Hideaway from 2000 to 2005, and for the past few years makes a point to travel back to St. Thomas in July to fish the tournament. “I’ve been trying for years to win this tournament.”

Stuedell’s Largest Kingfish earned him $2000 in cash, plus many other prizes.

Raymond Peterson, on Pier Pressure, caught 7 fish weighing 88.10-pounds to earn Best Male Angler, while the Best Female prize went to Andrea Tromben, who caught a total of 6 or 65.70-pounds of fish, aboard Boston Whaler.

Isabelle Gatcliffe set a new tournament record for Best Junior Female with her catch of 75.90-pounds of fish aboard Double Header I.

Although the tournament is focused around kingfish, other species earned anglers cash and prizes. Noah Mydlinski, a junior angler fishing aboard Dogsled caught the Largest Barracuda, at 18.85-pounds. Matt Driscoll, fishing from Double Header 40, won Largest Bonito, with his 6.10-pounder. Finally, Scott Newland caught the Largest Mackerel, a 5.45-pounder, aboard Double Header 40.

In addition to cash, prizes and trophies, winners also received a variety of luxury gifts generously donated by tournament sponsors and the island’s business community.

Adult and junior anglers who didn’t earn a prize still had a chance to win in the ‘Lucky-Unlucky’ and the ‘Catch in the Hat’ drawings.

First organized by the Northside Sportfishing Club in 1987, the tournament has become one of the highlights of French Heritage celebrations on St. Thomas. The event benefits the Joseph Sibilly School, St. Thomas Rescue, Civil Air Patrol and Nana Baby Children’s Home, as well as provides college scholarships. Over the past nearly three decades, the nonprofit Northside Sportfishing Club by way of its annual Bastille Day Kingfish Tournament has donated over $189,000 to community organizations. For information, Email [email protected] or call (340) 998-0854. Follow us on Facebook!