A lot of strange
events happened after Hurricane Ivan’s visit to Grenada, some not very
pleasant, but the following story is I believe one of the more pleasant ones.

After Ivan had departed, my wife and I woke
up on the Wednesday morning to realise that the house we were renting was no
longer tenable. On the Thursday, we were able to start moving about on the
roads, and our first call was to visit friends who have an apartment adjoining
their house, which they had built to Florida hurricane specifications, thus it
was undamaged. We knew they were trying to rent it out and it was beautifully
situated overlooking Egmont Bay. This we both knew would do nicely until we
could find a detached unfurnished house some time in the future.

As the apartment overlooked Egmont Bay, we
were able to see several badly damaged boats in the bay, which had not fared
well during the hurricane. After several weeks, however, most of the boats had
been either patched up or sorted out, going to Trinidad or other locations for
further work.

However, one boat remained on the
mangroves, a Westerly Corsair called Chasing the Moon owned by Jim and
Gina Odell. Having lived on a boat for seven years, we knew how uncomfortable
being stuck in the mangroves must be, so one evening we invited them over to
the apartment for dinner and if they wished, use of our showers etc. By then,
we had a generator so electricity was not a problem.

During the evening, we learnt from Jim and
Gina why their boat was taking longer to get going. Before Ivan, they thought
like a few other boat owners, that they were insured, having paid the premium
to a broker in England. He in turn pocketed the money and did not pay it to the
insurance company. This gentleman is now being entertained in one of Her
Majesties Prisons for fraud, so Jim and Gina were doing nearly all the repairs
themselves, hence the longer time scale.

As the evening went on, we also learnt that
Chasing the Moon had a third crew member, who we knew nothing about,
having only seen two people working on the boat. The third member of the crew
went by the name of “Buster”, an Amazonian parrot, hence why we had not seen
him in the work programme! I explained to our guests that it was one of my many
regrets in life that I had never owned a parrot and asked if one day in the
future we could visit and meet “Buster”.

“No problem,” said our guests, when they
were back afloat we would be more than welcome on board to have dinner and meet
“Buster”.

Grenada Workboat Regatta is a Ting of Beauty

As weeks went by, Chasing the Noon
eventually moved out of Egmont Bay, following a great deal of work by Jim and
Gina, and I got a phone from Jim at Island Water World, my place of work. Jim
explained to me that they have a great opportunity to go back to the States to
collect a catamaran for a friend and deliver it down to Grenada, all expenses
paid, and the owner of the catamaran will be on the delivery wanting to call in
at most of the islands on the way. A great way to have a break from Chasing
the Moon, which they had arranged to leave in the capable hands of another
couple. “Great,” say I. “When do you go?”

“Soon,” was the reply, “but there is a
problem. We can’t get the paperwork sorted out to enable us to take “Buster”
with us and we wondered if you and Fenella would look after him while we are
away, as you did say you always wanted a parrot.”

So a few days later, Island Water World,
Grenada, had a new recruit on its staff. Unfortunately, as customers to the
store will relate, “Buster” will only pay attention to ladies, having no
interest in male customers. We think he has a little French or Italian blood in
his veins! When he first started work, he was called at 07:00 hours to listen
to the 07:30 net and usually he is put to bed at about 17:00 hours – a long
working day for a bird, but the food is good and he gets a lot of lady
visitors, so no complaints from him.

After the first few weeks of me attending
to his feeding, cleaning of his accommodation etc, he seemed to make an
exception for me. As the photo shows, he and I have become good friends and as
many a customers will confirm, “Buster” is often found on my shoulder walking
round the store, and for sure when his owners return, I for one will miss him.
Strange how friendships start… 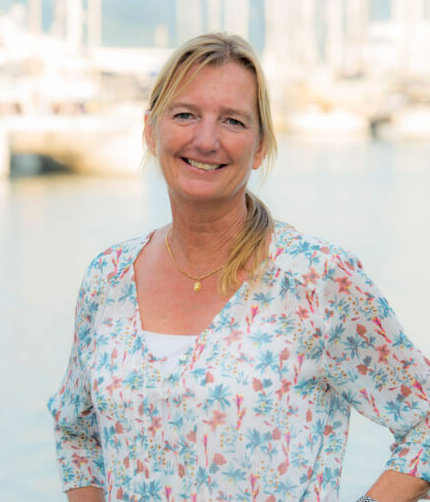