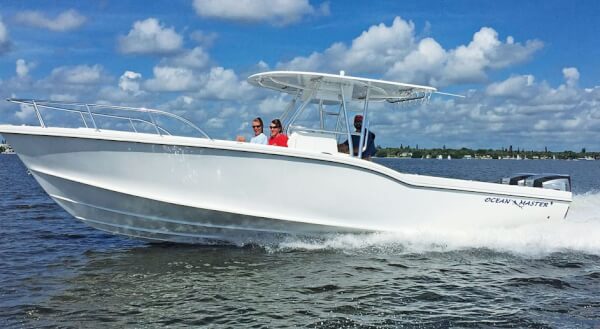 No other center console on the market today can plane in the open ocean on one engine, if needed, it’s that stable and safe, according to Mark Hauptner, president and founder of Ocean Master Marine, headquartered in Stuart, Florida. This is just one feature that makes the latest upgrades to the company’s 31-foot tournament center console sport fishing boat so impressive.

“We added two sets of lifting rails: a V-pad with its own lifting rails and two inset lifting rails aft. These changes, plus enhancements to the running bottom, have improved the Ocean Master 31’s acceleration, speed, fuel economy, maneuverability, stability and overall enhanced its performance,” says Hauptner, who adds that the 31’s current design is the result of four decades of continuous upgrading based on real-world fishing in venues spanning from the Florida Gulfstream to the remote island of Diego Garcia in the Indian Ocean where the vessel was in service to the U.S. Navy.

The 31 cruises at 34 mph where it will plane with one of its twin Evinrude® E-TEC® G2™ 300 HP engines tilted out of the water. Its top speed is 53 mph. Fuel economy when cruising at 30 mph has been recorded at 2.14 mpg, providing an astounding range of 600 miles. A turn-key Ocean Master 31’ center console with dual 300 HP engines and top runs around $219,000. www.oceanmasterboats.com