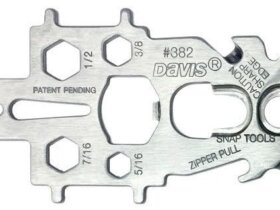 Snaps, Zippers and More Are No Match for New Pocket Tool

In the Optimist Green Fleet, Rodney Moorhead placed first, while Sean Huddleston won the Sunfish class with a stream of first-place bullets and one second place. High school sailors, Rider Odum and Zac Bozzo, topped the 420 Class. The 29er class, a new boat recently added to the Club’s fleet, was won by brothers Atlee and Dawson Kohl. The Rhodes 19s figured as the biggest class of the regatta with seven boats. It also proved the most competitive. Chris Stanton, with Ryan Higby as crew, won by posting a nearly flawless performance of first place finishes except for one race. An all-women team of Felice Quigley, Cheryl Nelthropp and Kelly Klempen finished a commendable sixth.

“Racing took place in Teague Bay with winds blowing a steady 10 to 13 knots,” says director Karen Stanton. “It’s always a great event in memory of longtime sailor and mentor to many sailors at our Club, Bill Chandler.”