When the Transat Ag2r La Mondiale sets sail from Concarneau on the coast of Brittany, France on April 22, local St Barth sailor Miguel Danet will be on the start line. This will be the third time that Danet has taken part in this challenging two-handed race on small, identical Figaro Beneteau sailboats just ten meters long. This year marks the 14th edition of the Transat Ag2r, which takes place every two years and is organized by OC Sport – Pen Duick.

In 2008, Danet sailed with Breton sailor Eric Péron, and they took a very admirable third place. In 2010, his teammate was Damien Cloarec and they finished in 22nd place, a very disappointing result for Danet, who was also busy building his charter boat business, St Barth Sailor, and starting a family (he now has two young daughters under the age of six).

Now, ten years later, Danet and Péron are sailing together again. “Eric came to St Barth for Les Voiles, sailing with Lionel Péan aboard SFS, and we got to talking,” explains Danet, adding he is looking forward to sailing with a pro such as Péron again, and the fact they have become good friends makes it all the more enjoyable. 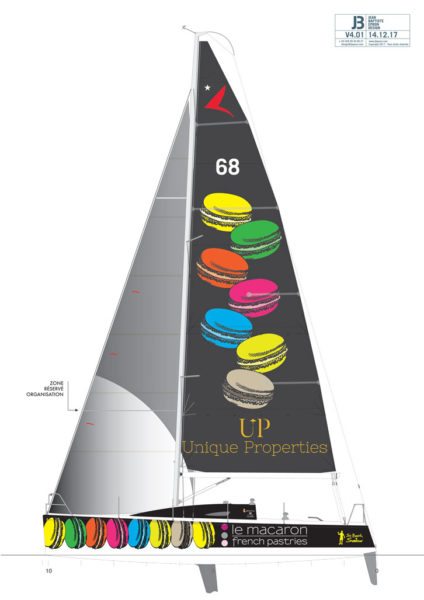 One of the big deciding factors was the certitude of a sponsor and a balanced budget. “It would have been too much to prepare for the race and look for money at the same time,” admits Danet. His friend, Marcel Lignon, represents Le Macaron French Pastries, which is the principal sponsor, and whose colorful macarons will decorate the sails.

“Eric is a real pro, and has done a lot of big races, including the Jacques Vabre. I look forward to reliving the experience of the Transat with him ten years later. There are lots of pros already registered for the race, guys who don’t do anything else all year long but race, I am doing this as an amateur, but there is a lot of serious competition from people who do nothing but sail professionally.”

“It was a super experience in 2008,” says Péron. “We didn’t really know each other very well at the time but became great friends. This will be my seventh time in the Ag2r. I like this race and I like that it starts in Concarneau, which is near my home in Brittany.

In the 2017 Jacques Vabre, Péron took third place in the IMOCA class. “It is a very enriching event,” he points out. He sailed with Morgan Lagravière on the former Safran, a VPLP-Verdier design from 2015, now called Des Voiles et Vous.

Danet and Péron will train together in France for a few months before the Ag2r, with Danet going back and forth, to be with his family and to work on physical training in St Barth, with a private coach twice a week. “My family will join me in France for the start of the race,” he says.

With physical and mental training, as well as studying the weather in advance, there are a lot of aspects to get under their belts before April when Le Macaron French Pastries sets sail.

Danet says he hopes that the population of St Barth will support him and Péron in a big way, like they did in 2008, as it’s exciting for everyone on the island to have a native son in the race.

Ellen Lampert-Greaux
Ellen Lampert-Gréaux lives in Saint Barthélemy where she is editor-in-chief of Harbour Magazine. She writes regularly about entertainment design and technology for Live Design magazine, and about Caribbean architecture for MACO, a Trinidad-based lifestyle magazine.
RELATED ARTICLES
Nassau